*****
13 September 2011
The following statement was issued today by the Spokesperson for Secretary-General Ban Ki-moon:


In the course of the press conference which he gave in Auckland, New Zealand, on 7 September, the Secretary-General was asked a number of questions about regional issues, including one on the Indonesian province of Papua and the United Nations Decolonization Committee.

In response, he stated that it was up to the Member States to decide on the re-listing or de-listing of any territory as a non-self-governing territory.

His off-the-cuff response may have led to the misunderstanding that he was suggesting the matter of Papua should be placed on the agenda of the Decolonization Committee.  The Secretary-General wishes to clarify that this was not his intention.
Posted by Overseas Review at 11:30 PM 1 comment:


Non-government organisations which have been campaigning on behalf of self determination for the people of Papua in Indonesia say they’re encouraged by the statement from the United Nations Secretary General Ban ki-Moon.

Mr Ban told media on Tuesday in Auckland that the UN will do all it can to ensure the human rights of West Papuans are respected. Peace Movement Aotearoa, which represents a large number of New Zealand NGOs, says Mr Ban must immediately appoint a special representative to investigate the situation in West Papua.

It says there’s needs to be a review of the circumstances and outcome of the controversial 1969 Act of Free Choice, under which Indonesia got UN support to absorb Papua. It also says the UN leader should try to convince the Indonesian government to allow free access to West Papua for media and NGOs.

The group also says the Pacific Islands Forum leaders must act without delay and send a fact-finding mission to West Papua to investigate the human rights situation and to support a peaceful dialogue.
And it says the New Zealand government can play a key role in mediating and beginning that dialogue process. 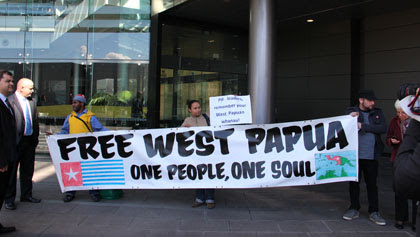 West Papuan protesters picket the Pacific Islands Forum summit hotel venue yesterday. In the centre is Paula Makabory. Photo: Henry Yamo / PMC
Representatives of the groups, meeting at the at Nga Wai o Horotiu marae at AUT University for the past two days, have called for Ban to follow up on his statements yesterday at a joint press conference with NZ Prime Minister John Key.

Replying to a media question, Ban had said that that the West Papua issue should be discussed by the Decolonisation Committee of the UN General Assembly. This comment has encouraged the supporters of West Papuan independence.

“Whether you are an independent state or a non-self governing territory or whatever, the human rights is inalienable and a fundamental principle of the United Nations,” Ban said. He also said he would “do all to ensure” that human rights were respected in West Papua.

The group’s statement also called for the UN to “persuade the Indonesian government to allow free access to West Papua for media representatives from the international community and for non-governmental human rights organisations.”

In support of the requests of Dr John Ondawame, spokesperson for the West Papuan People’s Representative Office in Vanuatu, the statement requests the New Zealand government “play a role in mediating and beginning the process of peaceful dialogue between West Papuan representatives and the Indonesian government”.

The statement called on the proposed UN special representative to “review the circumstances and outcome of the 1969 ‘Act of Free Choice’ that enabled Indonesia to assert political control of the former Dutch colony. It also demanded that New Zealand “cease all military ties with Indonesia” until human rights began to be respected in West Papua.


Today, as the support for West Papua seems to have gained momentum, the participating organisations in support of West Papua called for the Pacific Islands Forum to grant observer status to West Papuan representatives and support their right to self-determination. They also encouraged everyone in society to “take every opportunity to support West Papuans working for peace, justice, human rights and environmental sustainability”.


Posted by Overseas Review at 12:43 AM No comments: