Man Goes to Court to Fight for More Than Traffic Citations 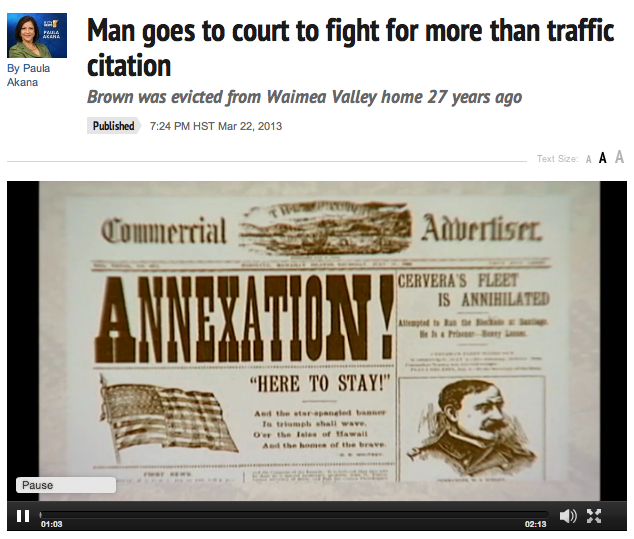 Yesterday, Lopaka Brown, through his attorney Dexter Kaiama, esq., provided evidence and argument in District Court that the court is not lawfully constituted according to United States constitutional law and international law because there exists no treaty of annexation that would have incorporated the Hawaiian Islands into the United States of America.

Without a treaty, U.S. law enacted by the Congress have no force and effect beyond U.S. territory, which nullifies the 1898 Joint Resolution of Annexation and the 1959 Statehood Act. The District Court derives its authority from the 1959 Statehood Act. The proper Court is a military commission established by the U.S. Pacific Command that administers Hawaiian Kingdom law and the laws of occupation.

Additional evidence provided to the court were two executive agreements entered into between Queen Lili‘uokalani and President Grover Cleveland that settled the illegal overthrow of the Hawaiian government. The first agreement, called the Lili‘uokalani assignment, binds the U.S. President, through the Pacific Command, to administer Hawaiian law and the laws of occupation.

The second agreement, called the Agreement of restoration, binds the U.S. President to restore the government and thereafter the Queen to grant amnesty. Both agreements are treaties and under U.S. constitutional law are called sole-executive agreements. Sole-executive agreements are also binding upon successor Presidents for their faithful execution. See also War Crimes: The Role of the International Criminal Court during the Occupation of the Hawaiian Kingdom.

If the Court disregards the evidence, it would be committing a felony by denying Brown a fair trial according to Title 18, U.S.C., §2441. In 1996, Congress enacted the War Crimes Act that criminalized war crimes identified in the 1949 Geneva Conventions as felonies. Article 147 of the Fourth Geneva Convention states that failure to provide a fair trial in an occupied territory is a war crime.

See also War Crimes are Felonies under U.S. Federal Law. The War Crimes Act is enforceable “outside” of U.S. territory when the United States military is the occupant of an occupied State.

Posted by Overseas Review at 8:59 PM No comments:

Miguel Pourier has passed away

WILLEMSTAD--Former Prime Minister of the Netherlands Antilles Miguel Pourier passed away on Sunday in Curaçao at the age of 74. He had been battling prostate cancer for some time.


Originally from Bonaire, the financial expert founded the political party "Partido Antia Restruktura" (PAR) that came out of a social movement backing the winning Option A to maintain the Antilles, in Curaçao's first constitutional referendum of 1993. All the existing parties had backed the losing Option B for the island to get an autonomous status.

The efforts to meaningfully restructure the so-called "Antilles of Five" (Aruba had already left the constellation in 1986) and remove certain obstacles to keeping the islands together failed, however. A second round of referenda was held, starting in St. Maarten in 2000, in which majorities in Curaçao and St. Maarten opted after all to become autonomous countries within the Dutch Kingdom, prompting the dismantling of the Netherlands Antilles effective 10-10-10, with the three "small islands" Bonaire, St. Eustatius and Saba becoming special overseas public entities of The Netherlands.

Despite this disappointment, Pourier worked tirelessly on the enormous financial problems facing the Central and Curaçao governments during his terms in office. With support from the International Monetary Fund (IMF), he took severe austerity measures that were so strongly opposed that at one point he had to take a boat to work to circumvent a blockade.

He will be remembered as a man of integrity, a sober and courageous leader who was not afraid to take unpopular decisions. He felt left in the cold and abandoned active politics in 2002, when part of the budgetary support from The Hague agreed on with the execution of the IMF programme remained forthcoming because not all conditions had been met.
.
Posted by Overseas Review at 2:17 PM No comments: