Mr. Chairman, Your Excellency Ambassador Diego Morejon-Pazmiño of the Republic of Ecuador

Distinguished representatives of non-self-governing territories, and members of this Seminar,

I am Richard Tuheiava, elected member of French Polynesia in the French Senate, and also elected member of the House of Assembly of French Polynesia from the Group "Union for Democracy" (UPLD). It is indeed my priviledge, on behalf of the UPLD political alliance led by the Hon. Oscar, Manutahi TEMARU, to extend best wishes to the distinguished participants of this regional seminar and to acknowledge, through you Mr. Chairman, the hospitality and the solid dedication of the Government of the Republic of Ecuador to the main subject of this event : decolonization.

Mr. Chairman,
At the outset, I wish to reiterate our deepest appreciation to the General Assembly of the United Nations for the adoption of the consensus resolution on 17th March 2013 providing for the re-inscription of the territory on the U.N. list of non self-governing territories. This singular act was achieved after over two years of intense discussions between our delegates from Tahiti and member States. The resolution A/67/L.56/Rev.1 entitled "Self Determination of French Polynesia" was adopted some 35 years after the Hon. Oscar Temaru, President of the Tavini Huiraatira-FLP Independence Party, began the long journey to achieve re-inscription.

In this regards, I had the pleasure to be advised yesterday that the reference code of the General Assembly resolution regarding French Polynesia's re-inscription on the U.N. List of non Self-governing territories is definitely A/RES/67/265.

In this connection, it is to be emphasized that the General Assembly has repeatedly reaffirmed that it is within the purview of the Assembly alone to determine whether a territory is non self-governing within the scope of the U.N. Charter. It was never meant that such a decision was to be made by the administering power alone, despite their protestations. That would be a classic conflict of interest and contrary to the meaning of the U.N. Charter. 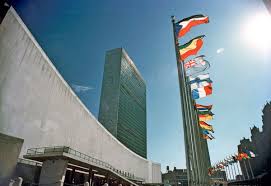 It must be borne in mind that the genuine act of self-determination for the Ma’ohi people of French Polynesia is consistent with relevant international instruments, in particular the International Covenant on Civil and Political rights; the International Covenant on Economic, Social and Cultural Rights; and the U.N. Charter itself. It is also important to emphasize the relevance of the U.N. Declaration of the Rights of Indigenous Peoples, in particular the few provisions related to their self-determination.

In this connection, the Noumea Accord back in 1998, which governs the self-determination process of New Caledonia formally, recognizes the rights of the Kanak people in determining the political future of the territory through realistic voter eligibility criteria for participation in the process. It means that not all the current inhabitants of New Caledonia are qualified to vote the upcoming self determination referendum in New Caledonia planned in 2014 or 2018. The European Court of Human Rights has confirmed the legality of this criterion in January 2005.

First: if the process is to proceed to a genuine act of self-determination exercised by the Ma'ohi people of French Polynesia, in the light of resolution 67/265, such eligibility criteria must be also employed in French Polynesia, as it has been in the case in New Caledonia, and not unduly influenced by the participation of recent settlers whose right to self-determination had long been exercised in Europe.

Mr. Chairman, allow me to strongly state that such eligibility criteria in French Polynesia is critical for the achievement of a fair and equitable self determination process to take place in my Country, should this criteria be set in parallel with the implementation of a Polynesian citizenship.

Second, I would like to stress the concern of the uncertainty of the legal status of the indigenous People of French Polynesia by virtue of the French Constitution. Before the revision of the French Constitution in March 2003, all inhabitants of the French overseas territories were constitutionally called "Peoples", regardless of the status of their territories (French overseas departments, or French overseas territories). Since this revision, the language "Peoples" was replaced by "populations" without any local consultation. The purpose was for France to prevent itself from any recognized precedent after the due adoption of a specific chapter within the French Constitution in 1999 on the issue of New Caledonia (in particular, the recognition of the indigeneity of the Kanak people), and for France to preserve itself from the legal perspectives of ratifying the U.N. Declaration on the Rights of the Indigenous Peoples in September 2007.

In this regard, the proper implementation of the resolution 67/265 on French Polynesia requires to clearly lift this legal uncertainty and to allow the due recognition of the Mā´ohi People as the indigenous People of this non self-governing territory.

Third, I wish to point out that the mandate of the General Assembly on the decolonization of French Polynesia can only be achieved through the development of an authentic political education programme on the legitimate options of political equality with direct support of the United Nations in all stages of the process. Indeed, the mindset of peoples of such former colonies is not prepared for quick political and economic shifts, unless sufficient time is allowed, educational assistance is provided and specific economic and social measures are achieved locally, prior to the Self determination referendum.

I emphasized these three points in the context of the recent advocacy by the recently elected territorial government of French Polynesia, in early May 2013, that the French expedite the organization of a self determination referendum in the territory designed to legitimize the status quo territorial arrangements – and with the deliberate inclusion of French or European settlers. This is an unacceptably distorted process, and is radically inconsistent with the established and internationally recognized precedents for the self-determination of New Caledonia.

Such recognized precedents include :

1. the conduct of a genuine political education program with direct U.N. support;

2. the setting of a reasonable eligibility criteria to vote the self-determination referendum

3. the achievement of selected legal, economical and social measures locally and prior to the referendum.

Accordingly, we ask that the Special Committee on Decolonization to pay very close attention to post-reinscription developments in French Polynesia. Because the opportunity is offered for the very first time before the Special Committee of Decolonization, please allow me, Mr. Chairman, to provide you a quick overall view of the selected measures to be necessarily achieved before a self-determination referendum would take place in French Polynesia:

·  creation and implementation of a Polynesian citizenship, in parallel with the setting of a reasonable eligibility criteria to vote the self-determination referendum,

·   local electoral system, to be revised,

· Fair and equitable compensation of the health and environmental consequences of the French nuclear testings in French Polynesia,

· legal competency on deep-sea or terrestrial strategic minerals within the Economic Exclusive Zone of French Polynesia,

·  positive labour discrimination in favour of locals, to be set,

·   land tenure and division, to be revised,

·   legal competency on control of immigration, and visas deliveries for non EU citizens,

·  legal recognition of the Tahitian language as second official one in French Polynesia,

·    legal system of the communes of French Polynesia, to be fully revised according to the geographical, demographical and financial constraints,

·  full-recognition of the legislative status of the Laws voted by the House of Assembly of French Polynesia,

Before concluding this statement, Mr. Chairman, I wish to point to the nature of the so-called “autonomous” status of French Polynesia.  In the absence of U.N. oversight of our political and economic evolution for over 66 years, a particular type of unilateral authority by the administering power emerged through changes in the French Constitution and the creation of various French “autonomy statutes” – all of which retained the reins of power in Paris.

What was – and is termed – as autonomy, is in fact nothing more that non self-governing territorial status under another name. This is political subterfuge of the first order, and needs to be addressed by the Special Committee in the course of its upcoming session in a few weeks time.

As a preliminary initiative, let me very shortly list you a few provisional items, applicable to the territory of French Polynesia, that would testify its non self-governing status:

· Whereas the provision of article 73 of the U.N. Charter asserts the priority of the interests of the inhabitants of the self-governing territories, beyond those of their administering powers, the current provision of article 74 of the French Constitution under which French Polynesia is placed shows that the particular interests of this French overseas collectivity need to be considered within the French Republic. Therefore, the unilateral authority of the administering power still exists and is subject to political variations.

·  Whereas the proper understanding of the self governing status of a territory, under the U.N. Charter, is that the transfer of the competencies by the administrating powers to its self-govering territory is not reversible, this is not the case of French Polynesia. Indeed, the powers and competencies transferred by the French to the local elected government of French Polynesia are identified and negotiated through a Organic Law that is voted by the French Parliament from Paris. Therefore, the final say remains in the hands of the periodical majority of the French Parliament in Paris, whatever the will of the elected members of French Polynesia would be.

· the constitutional separation of Legislative, Executive powers and Justice is not fully implemented in French Polynesia as the judicial system remains in full control of the administering power, even the designation and turn-over of the judges. The elected members of the institutions of French Polynesia have no say nor control on the Judicial system in this territory.

· the control and ruling of the foreign immigration - entering and exiting French Polynesia – remains fully in the hands of the administering power.

· the determination of the local currency, which is different from the EU currency, however is not controlled by the local elected government of French Polynesia. The current currency is still named C.F.P., for French Colony in the Pacific.

A relevant assessment of self governance was proceeded to French Polynesia over the past two years and has clearly indicated that the so-called autonomous status of this territory, under the French Constitution, was not consistent with the U.N. self governance indicators that are reflected in numerous General Assembly resolutions.

The adoption by consensus of the resolution 67/265 last 17 May provides now the highest evidence of the non self-governing status of French Polynesia. Now that the General Assembly has paved the way, the Union for Democracy-UPLD is engaging with the Special Committee to achieve, under the auspices and with the support of this U.N. Body, the next step forward, i.e. the achievement of a fair and equitable process of self-determination in favour of the Ma’ohi people of French Polynesia.

We look forward to active participation in your session in the coming weeks at U.N. Headquarters in New York in order to provide further background to our situation, and to make concrete recommendations on the realization of the self-determination of our people.


Elected member of the Assembly of French Polynesia - UPLD Group
Posted by Overseas Review at 5:06 PM No comments: