Gov. Onaga gives speech at UN calling for stop to US Henoko base construction 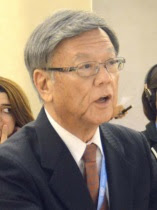 Governor Takeshi Onaga describes how human rights are being neglected in Okinawa (September 21, UN Human Rights Council, Switzerland)
Ryukyu Shimpo Ryota Shimabukuro reports from Geneva
On September 21, shortly after 5:00 p.m., Governor Takeshi Onaga gave a speech at the United Nations Human Rights Council in Geneva, Switzerland, speaking about the fact that Okinawans do not agree to the new base construction being carried out by the governments of Japan and the U.S. in Henoko, Nago, and arguing to the international community that the forceful implementation of the base construction plans constitutes a violation of human rights and must be stopped by any possible and legitimate means. Governor Onaga called upon the international community, stating, “I would like the world to pay attention to Henoko, where Okinawans’ right to self-determination is being neglected.”
It was the first time a prefectural governor from Japan gave a speech at the UN Human Rights Council. Governor Onaga emphasized that the overwhelming burden of military bases being shouldered by the Okinawan people is a human rights issue, hoping that rising criticism at home and abroad will prevent the new base from being constructed.
Governor Onaga emphasized the unjust nature of the demand by the U.S. and Japanese governments that a replacement facility be built within Okinawa in order for Futenma to be closed, stating, “After World War II, the US military took our land by force…we have never provided our land willingly.”
He also stated, “Okinawa only covers 0.6% of Japan. However, 73.8% of US exclusive bases in Japan exist in Okinawa. Over the past seventy years, US bases have caused many incidents, accidents, and environmental problems in Okinawa.” Based on this, he concluded, “Our right to self-determination and human rights have been neglected.”
Governor Onaga also mentioned the fact that candidates opposing the construction of a new base in Henoko won a series of important elections last year, including the gubernatorial election, the Nago mayoral election, and the lower house election. He announced his determination to prevent the base construction, stating, “I am determined to stop the base construction using every possible and legitimate means.”
(Translation by T&CT and Sandi Aritza) 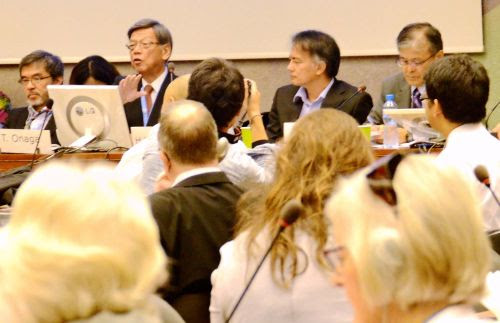 September 22, 2015 Ryukyu Shimpo Ryota Shimabukuro reports from Geneva
On the morning of September 21, the symposium Militarization and Human Rights Violations in Okinawa opened at the United Nations European Headquarters in Geneva, Switzerland. Governor Onaga spoke first at the symposium for about 20 minutes, mentioning that Okinawa was once an independent nation before its annexation by Japan. Now, after the Battle of Okinawa that claimed 200,000 victims, looking back on the 70-year span of an overwhelming base burden on Okinawa, he claims that Okinawan people’s freedom, equality, human rights, democracy, and right of self-determination are being disregarded.
The symposium was jointly hosted by Shimin Gaiko Centre (Citizens’ Diplomatic Centre for the Rights of Indigenous Peoples), the International Movement Against All Forms of Discrimination and Racism (IMADR), and the Shima Gurumi Association, among others. The issues of carrying out construction of the new base in Henoko were discussed through the lens of human rights, the environment, and other such aspects.
Co-representative of Citizens’ Network for Biodiversity in Okinawa, Hideki Yoshikawa, said that the process of conducting environmental impact assessments of the new base construction has been harshly criticized by experts as “the worst in Japan’s history,” among other such critiques. He said he wishes for scientists and experts around the world to investigate the impact that new base construction will have on the people and environment of Okinawa.
Hideaki Uemura, president of Shimin Gaiko Centre, introduced particulars about the United States’ tie to the Ryukyu Kingdom by the Treaty of Amity, its silence over Japan’s annexation of the Ryukyu Islands, and Okinawa’s militarization under direct U.S. control after the Battle of Okinawa. He presented that after Okinawa’s return to Japan, the U.S. expanded and strengthened its bases in Okinawa, meanwhile allowing its actions to fall under the shadow of the Government of Japan. Liability for Okinawa’s situation also falls heavily on the U.S., Uemura attested.
Yoshikazu Shiohira, Chief Editor of Ryukyu Shimpo, reported that cases have been occurring in which city residents protesting construction of the new base come to be in scuffles with and are arrested by police. Reflecting on another case in which a coast guard officer overreached his duty and restrained a citizen by straddling her, he said these behaviors undermine freedom of expression, freedom of assembly, and freedom of the press. He asserted that as Okinawan people do not condone new base construction, the construction should certainly be ceased.
(English translation by T&CT and Erin Jones)
Go to Japanese

Posted by Overseas Review at 8:09 PM No comments: