Okinawa Governor, known for his opposition to US Bases, Passes away at 67 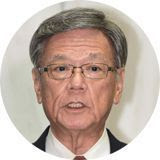 OKYO – The governor of Japan’s Okinawa prefecture, who came to power in 2014 on a campaign platform of opposition to US military bases, passed away on Wednesday at the age of 67 years.

Takeshi Onaga, who was recovering after undergoing pancreatic cancer surgery in April, had been hospitalized, according to public broadcaster NHK.

At a press conference earlier in the day, Vice Governor Kiichiro Jahana had said he would be taking over Onaga’s duties so that he could focus on his recovery.

The governor had been openly confrontational with Japanese Prime Minister Shinzo Abe over the relocation of one of the biggest US bases in the area, which also led to massive protests in Okinawa and a legal battle initiated by Onaga.

At the end of July, the governor announced that he intended to exhaust all legal options to stop the relocation of the Futenma base from its present location to Henoko Bay, north of the prefecture’s main island.

Japan and the US had agreed to move the military facilities to Henoko, an area much less populated than the current base in Futenma, in order to reduce its impact on local population.

The local government, however, rejected the shift on the grounds that it posed a threat to the area’s environment and might prove to be detrimental to the local population.

Onaga tried to revoke the approval for the transfer given by his predecessor, even taking the case to court, which has ruled in favor of Tokyo.

A majority of citizens of Okinawa – which is home to over 70 percent of US military facilities in the country and half of the nearly 47,000 troops that the US maintains in Japan – are opposed to the relocation of the Futenma base and have asked that it be moved outside its territory.

Posted by Overseas Review at 11:26 AM No comments: