More than 130 world leaders are gathering at United Nations Headquarters in New York for the General Assembly's annual General Debate, which kicks off Tuesday and aims to set the stage for building a new global development agenda which both protects the planet and promotes equity, justice and prosperity for all people.

Begining Tuesday (Sept. 24) and continuing through 1 October, the General Debate will provide an opportunity for high-level political officials to weigh in on what John Ashe, President of the Assembly's 68th session, has called “pivotal” talks on identifying the parameters of the post-2015 sustainability agenda, which will succeed the Millennium Development Goals - the eight anti-poverty targets that galvanized the world in 2000.


Thus far, 84 heads of State, 41 heads of Government, 11 Deputy Prime Ministers and 65 Foreign Ministers are scheduled to address the Assembly on sustainable development, poverty eradication, climate change, human rights, and a range of peace and security).

It is a special privilege for me to welcome you to the 68th Session of the United Nations General Assembly. As I do so I am reminded of the long journey to this point in time – a journey that began nearly sixty-years ago on the twin-island nation of Antigua and Barbuda in the Caribbean. There, in a household of seven kids, whose parents never had the opportunity to complete high school and could therefore not provide academic guidance to their offspring, one child, whose paternal grandfather signed his name with a X and whose mother was a descendant of slave plantation owners in the sister island of Barbados, was determined to be the first in his family’s generation to attend University and seek an opportunity wherever it may occur to make a difference.


I AM THAT CHILD of those parents!

And as I was reminded just yesterday at the ceremony for the unveiling of the winning design for the Permanent Memorial to honour victims of the Trans-Altantic Slave Trade, the ancestral journey began centuries ago, in an era when unspeakable cruelty and man’s inhumanity to man were in full bloom and were in many ways the currency of the day.

And while the more recent history was one filled with tremendous challenges and opportunities, it has nevertheless been quite a journey.

WILLEMSTAD — Professor Frank Martinus Arion received the award ‘Papiamentu Den Moveshon’ (Papiamentu in motion) in Curaçao from Instituto Alsa Papiamentu within the framework of a celebration of their 5th anniversary.

This organization of teachers of Papiamentu in primary, secondary and tertiary education, strives to enhance the importance of Papiamentu as a mother tongue in education, government administration and other sectors of the community. The writer himself is an honorary member and professes that he cannot imagine people living in a world where they’re not taught in their mother tongue and be satisfied with that.

Dr. Enrique Muller, another honorary member, praised Arion in his introduction by mentioning his courage to go where no one dared venture and that he did it with excellent results. “He showed us the way and we will follow him finding new paths for future research and uses of our language.”

He received several awards for his books in Dutch, including the Lucy B. and C.W. van der Hooft Award in 1974 for ‘Dubbelspel’ (which has been translated into English as Double Play, next to German and Danish); the ABC Award 1993 and the Cola Debrot Award 2001 for ‘De laatste vrijheid’ (The last freedom). In 2011 he was nominated for the Jan Hanlo Essay Award for the publication of ‘Intimiteiten van het schrijven’ (Intimacies of writing). In the same year Changá, the Papiamentu version of Dubbelspel became a reality. 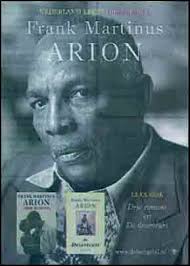 Dijkhoff and Arion worked together at the Instituto Lingwístiko Antiano (ILA) on the spelling, standardization and structure of the Creole language on the Leeward Islands. The ILA also published several books of Papiamentu authors. Arion was also ahead of his time. In 1987, as Papiamentu was introduced as a subject at elementary school level, he started a school, Kolegio Erasmo with Papiamentu as the language of instruction. The government followed in 2011.

Dr. Ronnie Severing, director of Fundashon pa Planifikashon di Idioma (FPI), spoke about Arion’s career, and of moments when the two had met, from being a student in the Netherlands to professors at the University of Curacao.

Former minister Norman Girigorie, a nephew of the author, spoke about his political past. In 1988 Arion founded the political party KARA, ‘Kambio Rápido (immediate change)’ that later on (under the name of KARA NOBO) joined Pueblo Soberano, the only party that strives for the independence of Curaçao.

Jacqueline Cras showed the audience the personal side of Arion. Being a friend of the family, she exposed the soul of the author. Her speech was awarded with a standing ovation.

All ABC-Islands were represented at this event. The sister organization Lanta Papiamentu from Aruba who was represented by their chairwoman, Joyce Pereira, showed  their appraisal by presenting the Curaçao organization with an award on their 5th  year of struggle for a better position of the mother tongue at all levels of society.

A writer from Aruba, Munye Oduber – Winklaar dedicated a poem to Arion.

Several students of Skol Humanista na Papiamentu showed their talents of singing, reading and dancing, among them his daughter Margi, one of the very first students. The event was also accompanied by an exposition of the national library of Curacao (recently named after him) about his collective works in Dutch, English and Papiamentu.

Posted by Overseas Review at 10:26 AM No comments: