NAHA--Could Okinawa become an independent state? Five Okinawans formed a group to study the possibility on May 15, the 41st anniversary of the island prefecture's reversion to Japanese sovereignty.

While only a minority of Okinawans are calling for independence, a growing distrust among islanders toward those on the mainland, who have left the southern prefecture burdened with U.S military bases, could lead to more empathy for the idea. 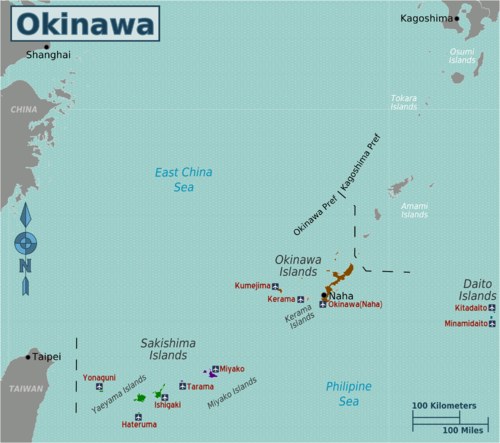 Okinawa Prefecture accounts for only 0.6 percent of Japan’s landmass, but it hosts 74 percent of all U.S. military bases in the country.

The members plan to conduct research on Scots who seek independence from Britain as well as on the possible effects on the local economy if all U.S. bases are withdrawn.

Matsushima decided to form the group after he heard about a meeting of prefectural governors in 2010. At the meeting, Okinawa Governor Hirokazu Nakaima demanded that central and local governments significantly reduce Okinawa's burden of hosting U.S. military bases, but almost no governors supported him.

“To achieve a breakthrough on the bases issue, discussions on the option of independence are necessary,” said Matsushima.

The argument for Okinawa's independence stems from the “anti-reversion theory,” which was propounded around 1970 when Okinawa was still under U.S. administration. The theory stated that it is an illusion to believe Okinawans can live a peaceful life under Japanese sovereignty.

But the idea failed to gain widespread support from islanders at the time.

“Expectations for the return to Japanese sovereignty were so great that the anti-reversion theory was largely ignored,” said Akira Arakawa, 81, who advocated the theory.

Arakawa said he pins his hopes on the new group formed by Matsushima and his colleagues.

“Okinawans have continued to be betrayed by Japan after they were returned to Japanese administration, and some support the idea of independence,” Arakawa said.

Kantoku Teruya, 67, a Lower House member from the Okinawa No. 2 district, mentioned the new study group on his blog.

The entry in April comes under the sensational heading, “Okinawa finally becoming independent from Yamato." Okinawans refer to the Japanese mainland as Yamato.

“It is sad to discuss independence, but we should have enough backbone to discuss it (to call attention to Okinawa's problems),” Teruya, of the Social Democratic Party, said in an interview. “The call for independence represents an objection filed against the nation of not treating its people the way it should.”

According to Teruya, some people on the mainland sympathetic with Okinawans regarding the U.S. bases issue have told him that the tiny island prefecture should break away from Japan.

But Teruya said he has a key question for such people.

"I want to ask whether they are prepared to take on the U.S. bases (abandoned by Okinawa) on the Japanese mainland," he said.


Posted by Overseas Review at 10:20 PM No comments:

Lawsuit on U.S.citizenship for Amer. Samoans dismissed by U.S. Judge


A federal judge in Washington, D.C., is dismissing a lawsuit filed by five American Samoa residents who say people born in the unincorporated U.S. territory should automatically receive U.S. citizenship.

Immigration laws classify people born in American Samoa as U.S. nationals, but it's the only U.S. territory where U.S. citizenship is not a birthright.

Assistant U.S. Attorney Wynne Kelly argued that Congress has the power to determine the naturalization process for potential citizens, and the lawsuit was trying to sidestep that. Kelly represented the federal government and three U.S. State Department officials as defendants.

Eni Faleomavaega, the territory's non-voting delegate to the U.S. House, filed a brief last year arguing that Congress is the proper venue to decide citizenship, not the courts.

Leon said in his Wednesday ruling that he agreed with the government's argument that previous Supreme Court and federal court rulings as well as historical practice trumped the plaintiffs' assertions.

“Federal courts have held over and over again that unincorporated territories are not included within the citizenship clause, and this court sees no reason to do otherwise,” Leon said.

“To date, Congress has not seen fit to bestow birthright citizenship upon American Samoa, and in accordance with the law, this court must and will respect that choice," he said.

American Samoa is the only U.S. territory without the birthright of citizenship. Leon said people in the unincorporated territories of Guam, Puerto Rico, the U.S. Virgin Islands and the Commonwealth of the Northern Mariana Islands got birthright citizenship through various laws years after being acquired by the U.S. That wouldn't have been necessary if the Constitution granted citizenship to people in unincorporated territories, he said.

Charles Alailima, an attorney for the American Samoa residents and a California group who sued, said he was disappointed the judge did not focus on American Samoa's unique history and circumstances.

He said he will be discussing options for an appeal with his clients.

“We've known all along that the significant constitutional issues in this case would be decided on appeal, no matter which way the trial judge decided,” he said.

The lawsuit's lead plaintiff, Leneuoti Tuaua, said he doesn't think the issue should be up to Congress.

“(So) long as American Samoa is U.S. soil (?), I continue to believe that the Constitution guarantees my family the right to citizenship,” he said.

Faleomavaega said he agrees with the ruling but isn't opposed to citizenship for American Samoans.

“The decision should be made by the people and not by a court," he said. "After the people decide they desire citizenship, I can work with Congress on legislation to provide citizenship for persons born in American Samoa.

Posted by Overseas Review at 12:19 PM No comments: