"The colonial power continues to tell the democratically-elected government how to spend its own money by controlling the territory's budget. I guess that why they call us a non self-governing territory. "  -  an Anguillian student 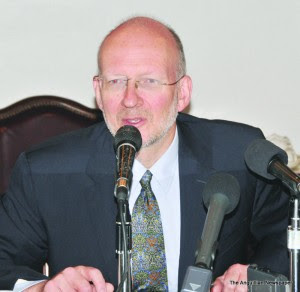 The 2013 budget of the Government of Anguilla was passed in the House of Assembly on December 18, 2012 but, to date, there is no word about approval from the Foreign and Commonwealth Office in London.

Governor Alistair Harrison told reporters up to Friday, January 18,that he had not received any instructions from London “as to whether to assent to it.”

He further said: “I know a lot of work is being done in London. The Chief Minister has signed a provisional warrant which allows the [2012] budget to be rolled over… and I am hoping to get instructions as soon as possible to take the matter forward.”

Asked whether the Government’s delay in signing the Framework for Fiscal Responsibility had any bearing on the approval of the budget, the Governor replied: “I think the aim of the FFR is more long-term than the budget. The idea is to put the finances of a given Overseas Territory onto a sustainable long-term footing…That has already been done in a number of Overseas Territories such as the Caymans – the most recent. That very much addresses the longer term. The budget just addresses one year.”

He said that the FFR agreement had been under discussion for the past eighteen months. A draft was sent to the Government of Anguilla in April 2011. The Government responded in September 2012 and officials in Anguilla and London were still having discussions on the matter.

“I think it is important to recognise that the FFR,which may very well be renamed, is a much broader document than simply replacing the Borrowing Guidelines,” Governor Harrison added. “It covers borrowing, but it also covers the overall approach to finances and other matters that the Chief Minister and the UK Government have been working on and talking about. The Chief Minister told Mark Simmonds when he was here that he wanted to sign the FFR but there are some issues that still need to be resolved…”
Posted by Overseas Review at 3:42 PM No comments: