Sixtieth anniversary of the Bravo nuclear test on Bikini Atoll

This Saturday (1st March) is the sixtieth anniversary of the Bravo nuclear test, when the US government detonated a thermonuclear device on Bikini Atoll.

The test, on 1 March 1954, sent a cloud of radioactive fallout across the northern atolls of the Marshall Islands, which were part of the United Nations Trust Territory of the Pacific Islands, a strategic UN trusteeship administered by the United States.

Part of Operation Castle, Bravo weighed in at fifteen megatons, the largest nuclear device the US military had tested.

The people of the Marshall Islands live to this day with the health and environmental consequences of 67 atomic and hydrogen bomb tests conducted by the United States on Bikini and Enewetak atolls.

Around the Pacific region, March 1 is commemorated as Nuclear Free and Independent Pacific day, remembering the survivors of 315 US, British and French nuclear tests around Oceania.

Let us remember, and let us act.

One hundred and forty six nations - but none of the nuclear powers - have just met in Mexico for the Second Conference on the Humanitarian Impact of Nuclear Weapons. There is international momentum to develop a treaty banning the development and deployment of nuclear weapons.

As Rev. François Pihaatae of the Pacific Conference of Churches has stated: “In international forums, including conferences on the humanitarian impact of nuclear weapons, the Pacific must speak with a united voice to bring about attitudinal change in the larger nations. We must speak out, for if we remain silent the larger countries will be under the misconception that their testing, development and construction of nuclear weapons are acceptable.


The long shadow of Bravo, Inside Story, 25 February 2014
http://inside.org.au/the-long-shadow-of-bravo/

“Mission to the Marshall Islands (27-30 March 2012) and the United States of America (24-27 April 2012)” - Report of the Special Rapporteur on the implications for human rights of the environmentally sound management and disposal of hazardous substances and wastes, Calin Georgescu, 3 September 2012, A/HRC/21/48/Add.1
http://www.ohchr.org/Documents/HRBodies/HRCouncil/RegularSession/Session21/A-HRC-21-48-Add1_en.pdf

Posted by Overseas Review at 4:53 PM No comments: 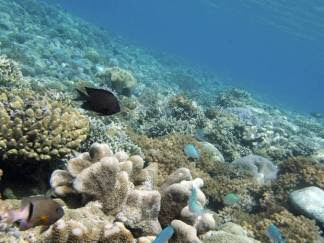 The last great unexplored wilderness on Earth is about to experience industrial-scale mining that could change the face of the pristine seabed of the deep ocean for generations to come, scientists have warned.


Access to the mineral deposits and rare-earth metals that are known to exist on the sea bed has never been easier with the help of robotic submarines and there are already 19 leases for prospecting in international waters and another five leases that are pending, they said.
Strip mining involving giant underwater cutters, where vast areas of the seabed are removed and brought to the surface as a slurry, and vacuum mining where the seabed is literally sucked up by machines, are the kind of mining operations that could be commonplace in a few years time, they told the American Association for the Advancement of Science.

“The deep ocean is a vast repository of natural resources and we’re going to be going in there if not now, then within the next 50 years,” said Lindwood Pendleton of the Duke Nicholas Institute for Environmental Policy Solutions in Beaufort, North Carolina.
“We’re really in the dark when it comes to the ecology of the deep sea. We know a lot about a few places, but nobody is dealing with the deep sea as a whole, and the lack of knowledge is a problem for decision-making and policy,” Dr Pendleton said.

Without careful controls the physical habitat of the sea bed hundreds of feet below the surface could be irrevocably destroyed along with the unique wildlife it supports, said Cindy Lee Van Dover of Duke University in North Carolina.

“The deep sea is out of sight, out of mind, and because there isn’t a specific human society that will be directly impacted by the negative consequences of extraction, there’s a whole level of concern that isn’t being expressed when it comes to deep sea  industrialisation,” Dr Van Dover said.
“There’s just so much that we don’t know about the deep sea, and we need that basic research before we form policy, but we urgently need policy before this window of opportunity closes,” she said.
“One hundred years from now, we want people to say they got this right based on the science they had, and they weren’t asleep at the wheel,” she told the meeting.

One mining company prospecting off the coast of Namibia intends to remove between 1 and 5 metres of seabed silt and ship it to the land for extracting phosphate deposits before the waste slurry to siphoned off and dumped back into the sea.
Bronwen Currie of Namibia’s National Marine Information and Research Centre in Swakopmund, said that concerns about the environmental impact of the phosphate mining has led to the government imposing a moratorium until further assessments can be made about its long-term effects.

“The biggest concern is the accumulation of effects. We need research on the impact on fish stocks. There is no real knowledge of the real impacts of this kind of mining,” Dr Currie said.