100TH ANNIVERSARY OF TRANSITION FROM DANISH WEST INDIES TO U.S. VIRGIN ISLANDS TO BE OBSERVED ON 31ST MARCH

ST. THOMAS — As the formal representative of Denmark, Prime Minister Lars Løkke Rasmussen will be among the distinguished guests attending the ceremonies to commemorate the 100th anniversary of the territory of the United States Virgin Islands, Government House announced this afternoon. Mr. Løkke Rasmussen will participate in the Transfer Centennial programs to be held on St. Croix and St. Thomas on March 31, 2017.

“The U.S. Virgin Islands makes up an important part of the Danish history and the Centennial stands for a significant milestone,” the prime minister said in an official statement. “Through my participation and my presence, I look forward to meeting the people and politicians on the islands and show them our respect for them and the history.”

Governor Kenneth Mapp said the people of the Virgin Islands will be pleased to welcome Mr. Rasmussen, his delegation, and dignitaries from around the world to take part in ceremonies and events associated with the transfer.

“This is an important chapter in our history and we deeply appreciate the participation of Prime Minister Løkke Rasmussen,” Mr. Mapp said. “I have asked the people of the U.S. Virgin Islands to treat the occasion of the Transfer Centennial as a time of both serious reflection and preparation. Together we must determine how, given our unique status and history, we can best set a path forward over the next 100 years.”

In the prime minister’s New Year’s Day address to the nation of Denmark, he made mention of this year’s Centennial commemoration and noted that many Danes are expected to take part in this year’s events.

Mr. Løkke Rasmussen has served as prime minister of Denmark since June 2015. He was previously prime minister from April 2009 to October 2011. He is the leader of the Venstre political party. He will be accompanied to the territory by his wife, Sólrun Jákupsdóttir Rasmussen. 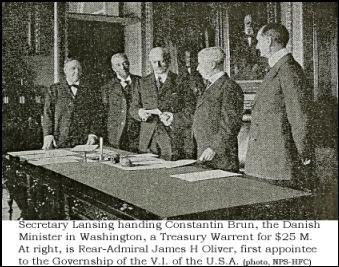 Posted by Overseas Review at 10:40 AM No comments: