Possible implications of the U.S. 'pivot' to the Pacific?

OP-ED: The Elephant vs. the Shark
By Lawrence Wilkerson
The Obama administration's nebulous "Pacific Pivot" is setting the stage for a superpower conflict in East Asia.
Lawrence Wilkerson was Secretary of State Colin Powell’s chief of staff as well as associate director of the State Department’s Policy Planning staff, where he was responsible for East Asia and the Pacific. Before serving at the State Department, Wilkerson served 31 years in the U.S. Army. He is a contributor to Foreign Policy In Focus. 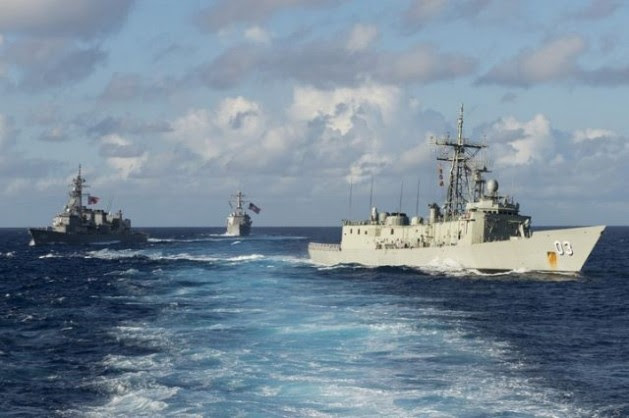 The Obama administration’s “Pacific Pivot” will make it more difficult than ever for countries of the region to stay neutral in an emerging rivalry between the United States and China. Credit: U.S. Navy/public domain

WASHINGTON, Mar 25 2014 (IPS) - To pivot, according to the venerable Oxford English Dictionary, means “to turn as on a pivot.” Which takes us to the noun, which seems more appropriate for describing the Obama administration’s Pacific policy: “That on which anything turns; a cardinal or central point.”
The problem, however, is that finding a cardinal or a central point in the administration’s Pacific policy is extremely difficult. What is clear is only a verb tense.
At the climax of this awesome conflict, the massive land power will confront the formidable sea power.

The United States is turning from more than a decade of war – ineffective and costly – in western Asia to a more important and strategic region, eastern Asia, plus the waters that approach it. Perhaps the central point of the pivot is Asia, and the United States is switching from one end to the other.
The “Pacific,” however, suggests a broader turn, although new allies and commitments in the Indian Ocean seem to balance if not outweigh those in the Pacific Ocean. India is the most potent example, a country located more or less at a central point.
If geographical and policy clarity is lacking, so is clarity around security, and in particular military security. Muddling matters more, U.S. Secretary of Defence Chuck Hagel on Feb. 25 outlined a resource approach that implied that China is the number one challenge for the United States, therefore land forces will subsidise sea and air forces.

Posted by Overseas Review at 7:39 PM No comments:

delivered in the
Montserrat Legislative Assembly

1.                       I have the honour of presenting this budget address at a time when the challenges facing our island continue to be very significant. I am also mindful that in the next few months we will exercise one of our most fundamental rights, that is, to elect a government to continue the developmental process.  This budget statement must therefore be a report of our stewardship over the past four and a half years and also an indication of our policies and programs to support our vision for the next five years.

2.                       It is a vision that carries with it huge political, economic and social programmes. It is also being presented at a time when the more prosperous nations of the world are struggling to maintain a stable socio-economic environment. Over the last four and a half years, the people of Montserrat under MCAP's administration have been on a mission.  It involved the challenge not only of stabilizing the economy but also establishing a platform for recovery and growth.

4.              Let me take this opportunity to thank all the Montserratians and those who have made Montserrat their place of residence for their continued support and interest in the development of our land.  It is so easy to allow the challenging economic environment to undermine the reputation and friendly atmosphere for which Montserrat is renowned.  The MCAP Administration invites all to pause and reflect on the progress that has been made so far.

Posted by Overseas Review at 8:48 AM No comments: