"We have (consistently) highlighted the considerable political, social and economic inequality inherent in a colonial arrangement that is euphemistically projected by the territorial accomodationist government as autonomy."  - Richard Tuheiava, member of the French Polynesia Assembly.

I have the honour to address you in my capacity as an elected member of the House of Assembly of French Polynesia from the Tavini Huiraatira party. I bring greetings from our esteemed political leader and former President of our territory, His Excellency Oscar Temaru.

It has been over five years since the right of the people of Ma’ohi Nui/French Polynesia to self-determination and independence under the meaning of the U.N. Charter has been formally confirmed by consensus General Assembly Resolution of 17 May 2013. We continue to pursue the realization of this inalienable right.

In this regard, we wish to express our deep appreciation for the consistent recognition by the Non Aligned Movement for their affirmation of this right, most recently expressed in the Baku Declaration of the Eighteenth (18th) Ministerial Conference of the Movement in Azerbaijan last April 2018.

Given the global support for a legitimate self-determination process, we reiterate our call that the administering Power emerge from the diplomatic shadows and comply with their international legal obligations:

1) to provide information to the Secretary-General under article 73 (e) of the United Nations Charter, and

2) to bring our territory to the full measure of self-government through a genuine self-determination process under Article 73(b) of the UN Charter, and relevant General Assembly resolutions.

Such a genuine process would entail a direct – rather than observer – role of the United Nations in the educational program as indicated in General Assembly resolutions, and in the conduct of a self-determination referendum on options of political equality.

Since 2013, our annual statements to the Special Committee and Fourth Committee have consistently pointed to actions that have impeded the exercise of our right to self-determination. We have highlighted the considerable political, social and economic inequality inherent in a colonial arrangement that is euphemistically projected by the territorial accomodationist government as “autonomy”. For example:

1) We have provided information on the financially exploitative relationship with the administering Power in violation of the Operative Paragraph #2 of Resolution 72/111 and earlier G.A. resolutions which recognize this action as incompatible with the U.N. Charter, the Decolonization Declaration 1514 and the Universal Declaration of Human Rights. This exploitation takes many forms, including the stubborn retention of our natural resources in violation of Operative Paragraph #15 of G.A. Resolution 72/111.

2) The economic exploitation goes further with the French insistence on control of our five millions square kilometers of Economic Exclusive Zone, extending their illegal authority over our undersea and seabed resources, as well as deriving revenue from airlines and satellites crossing over our aerial zone.

Of these areas of exploitation, the most egregious has been the human cost of the impact - on the health of our people - of 30 years of nuclear testing, and the challenges to their receiving just compensation and reparation. In our statements to this Committee, we have offered to supply an extensive independent report of such French nuclear period in our territory for dissemination to the member States, after having advised the Committee that the two Secretary-General Reports on the issue were grossly insufficient.

We understand, however, that even reference to these inadequate reports were being recommended for removal from the resolution. This would have the unintended – or intended – consequences of eliminating the requirement for the Secretary General “to provide continuous updates” on the issue, which would be unacceptable to us.

We, again, express our disappointment that reference to public information which presents the true picture on the ground is skillfully omitted from the U.N. resolutions and working papers. We can only conclude that the administering Power can refuse to provide information on French Polynesia, while still influencing the decisions of the Committee, by stealth.

Nevertheless, we wish to endorse the position of the Non Aligned Movement at the 2018 NPT Conference, which “acknowledges the existence of a special responsibility towards the affected people and areas, including those in the former United Nations Trust Territories, that have been adversely affected as a result of nuclear weapon tests conducted in the past”.

In our 2014 statement before this Committee, one year after our territory’s reinscription, we have advised of the absolute unilateral control by the administering Power over our electoral system. This includes:

• The authority to write and amend the electoral ordinances

•  Inclusion in the electoral rolls of French police and military personnel

•  The authority to cancel election results, for dubious reasons •The governance of the 48 communes by the French State, not by the territorial government. But the most astounding electoral distorsion is the administering Power’s authority to grant “bonus seats” in our 57-members Assembly, to the political party of the day which supports the so-called autonomy status of colonial accommodation.

It is within such colonial framework that the elections were held for our Assembly last month. We wish to inform this Special Committee that last 7 June 2018, a unanimity of the 57-members of our Assembly of French Polynesia, including the current ruling pro-France party, adopted an decision to oppose a electoral reform initiated by the French Government that aims to reduce the number of Congressmen representing Ma’ohi Nui within the French Parliament in Paris, and also to limit the number of terms to our elected mayors. This is also clearly an additional indication on how our administering Power is holding its unilateral authority on our local electoral system.

To be clear, Mr. Chairmain, elections in our territory under such an overall biased system can in no way be recognized as a substitute for any legitimate act of self-determination, where the people select from the options of political equality in a unbiased referendum process.

Therefore, there is neither relevance nor space for any so-called “fourth option of self-determination” to be discussed, that would aim to deviate the genuine exercise, by the People of Ma’ohi Nui, to its right to self-determination under the exclusive meaning of the U.N. Charter. In this context, we wish to recall the mandate of the General Assembly as contained in six resolutions now on the question of French Polynesia, and the mandate that must be honoured.

Posted by Overseas Review at 9:37 PM No comments:

GUAM TO FOCUS ON DECOLONISATION ON 4TH JULY ACTIVITY

Independent Guåhan invites the island community to its upcoming concert,Na’lå’la’: Songs of Freedom Vol. 2 on July 4th from 3-6 pm at Adelup Field.
This event is free and open to everyone and will feature live music, poetry and dance from local artists. This concert is part of Independent Guåhan’s community outreach around decolonization.
This July 4th, rather than celebrate the independent of another, let us reflect on our island’s need for decolonization.
Independent Guåhan is looking for volunteers to help make this concert a success. If you are able to volunteer or would like to learn more please email independentguahan@gmail.com. 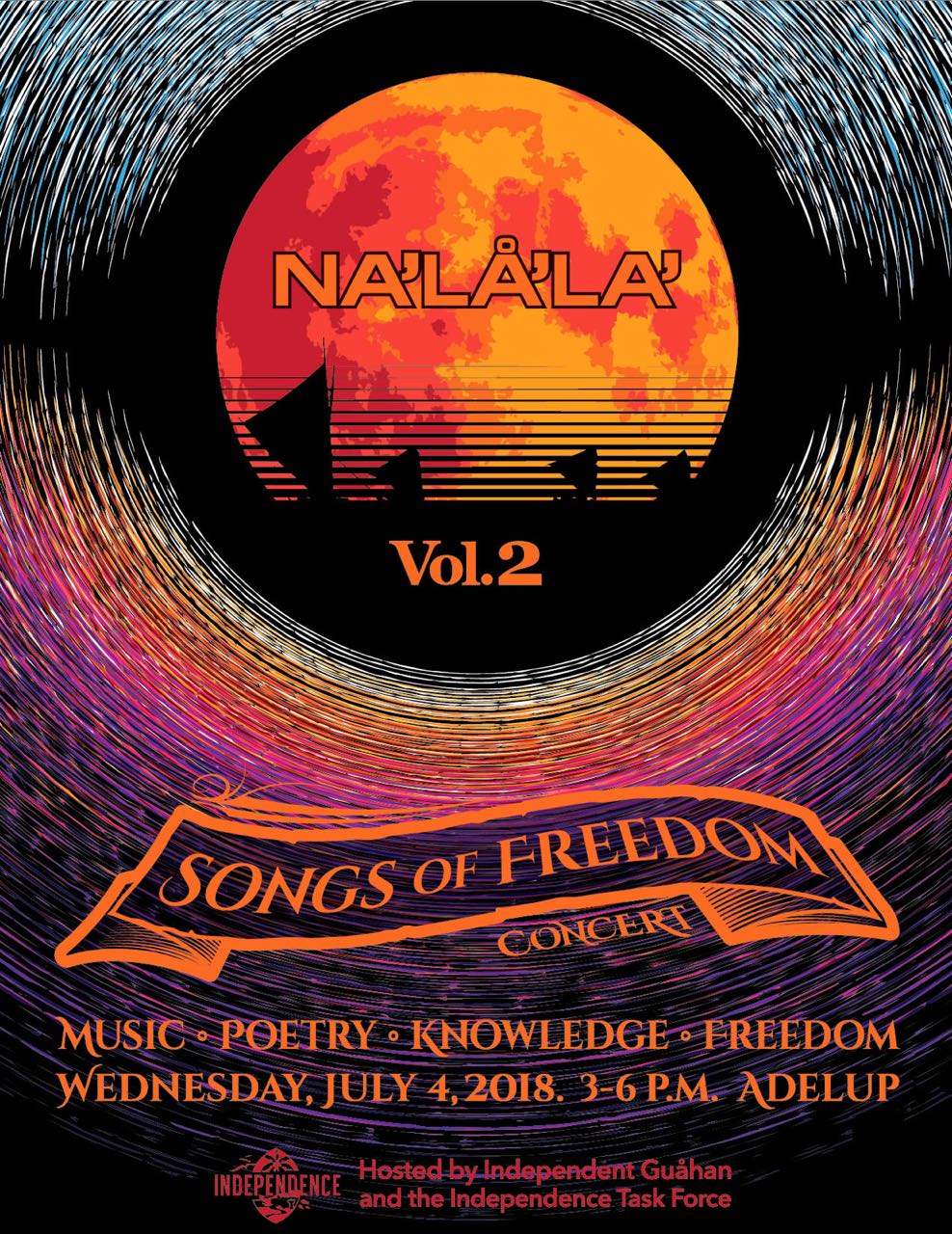 Posted by Overseas Review at 9:33 PM No comments:

HAWAI'I - 'THE THEFT OF A NATION' HISTORICAL DRAMA 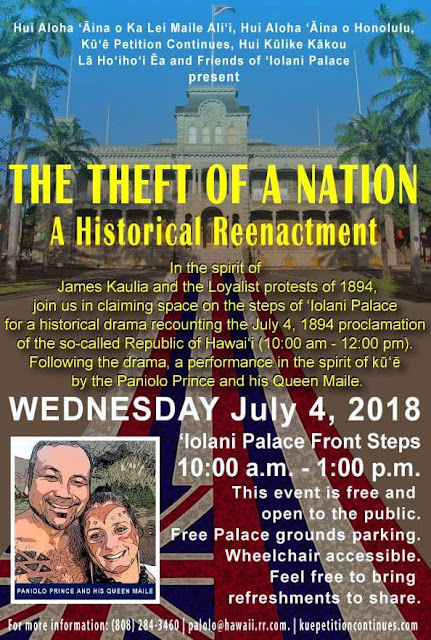 Posted by Overseas Review at 9:32 PM No comments: