"We have continually emphasized the critical nature of the (natural) resource question as a core issue for our future development. Whether or not these resources are considered in Paris to be "strategic" is irrelevant to the applicability of international legal decisions which place the ownership of natural resources with the people of  Ma'ohi Nui." 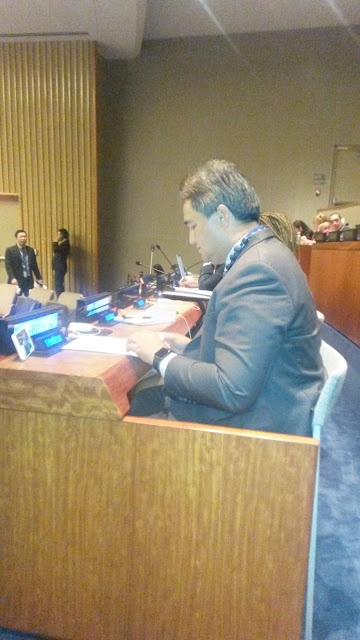 to the
Statement to Special Committee on Decolonization

In my capacity as elected member of the House of Assembly of French Polynesia from the Group “Union Pour La Démocratie” (U.P.L.D), I wish to extend warmest regards from the people of Ma’ohi Nui/French Polynesia, and from our esteemed political leader Oscar Temaru. We reiterate our congratulations to you on your election to chair the Special Committee. We wish to also express our deep appreciation to the Government of Nicaragua for hosting an outstanding 2016 Pacific regional seminar where new ideas were considered to give substance to the decolonization process, on the ground in the territories themselves. We also congratulate Ambassador Peter Thomson of Fiji on his recent election to the Presidency of the General Assembly.

It has been three years since Ma'ohi Nui/French Polynesia has been re-inscribed on the United Nations list of Non Self-Governing Territories by way of General Assembly Resolution 67/265 following the unilateral decision of the administering Power in 1947 to cease their Article 73(e) obligations to transmit information to the U.N. on our territory. Even as the General Assembly has formally confirmed the applicability of Article 73 of the Charter to our territory, the administering Power still refuses to transmit information in clear violation of the Charter - the highest form of international law.

Nevertheless, the denial of our re-listing does not negate the fact that the process of decolonization was made wholly applicable to Ma'ohi Nui/French Polynesia by Resolution 67/265, and the inalienable rights of the Ma'ohi people have been formally recognized. Of particular note is the inalienable right of the people to ownership, control and permanent sovereignty over their natural resources, including marine resources and undersea minerals, within our 5 million square kilometer exclusive economic zone.

This inalienable right is in accordance with the relevant resolutions of the General Assembly, decisions of the International Court of Justice (ICOJ), and U.N. legal opinions. Accordingly, these resources belong to the Ma'ohi people, not to the administering Power even as it seeks to exercise a unilateral authority to claim particularly those resources which are considered "strategic" in nature through a Presidential decree in Paris with no consultation with the people of our territory or its elected government.

A most recent disregard of these rights is the announced plans by the administering Power to claim through the U.N. Commission on the Continental Shelf an extended continental shelf in our waters. This comes just after the Commission decision to allow the claim of a half-million square kilometres in New Caledonia waters. Such decisions are inconsistent with the relevant decisions of the ICOJ, the General Assembly and the U.N. Legal Office earlier cited. We urge the Special Committee to engage the U.N. Commission on this inconsistency.

In our statements to this Committee, and to the Fourth Committee, we have continually emphasized the critical nature of the resource question as a core issue for our future development. Whether or not these resources are considered in Paris to be "strategic" is irrelevant to the applicability of international legal decisions which place the ownership of natural resources with the people of the non self-governing territories. The hurried departure by the administering Power delegation from the meeting room whenever the words "French Polynesia" are uttered is clear indication that they do not wish to discuss such issues as their attempt at the "resource grab", lack of compensation for the effects of nuclear testing, among other actions which violate international norms. We once again urge the administering Power to come to the table and comply with the rule of law of the United Nations Charter.

The General Assembly has consistently affirmed that "in the process of decolonization, there is no alternative to the principle of self-determination, which is also a fundamental human right, as recognized under the relevant human rights conventions."

In this connection, the Special Committee should remain vigilant as to the fundamental distinction between colonial reform and decolonization. Proposed measures to modernize the status quo dependency arrangements, with no intention to bring about genuine decolonization, must be carefully examined by this Committee to avoid the inadvertent legitimization of arrangements which remain colonial in nature, but which may be projected to you as self-government. These models only represent, however, the 'illusion' of self-government.

In this connection, a colonial accord to modernize the existing political status of our territory is under consideration in Paris with an announcement to this effect expected before the end of the year. While it is being reported that this proposal would address some of the outstanding issues between our territory and the administering Power, it is not intended to alter the overall unilateral authority of the administering Power over the territory. We will provide this Committee with an independent assessment of this colonial accord in due course. But suffice to say that such a colonial accord, without even the concurrence of the people of the territory, does not replace a legitimate process of self-determination leading to genuine decolonization with absolute political equality - principles which the General Assembly has continuously reaffirmed.

Rather, the colonial accord is designed to extend the French policy of 'assimilation' which would effectively bring our territory closer to a unilateral political integration without the concurrence of the people. Such unilateral annexation does not constitute decolonization, and we interpret these maneuvers as a counter strategy to the recognized process of self-determination.

The intention of such schemes, in our view, is to avoid compliance with the obligations of the U.N. Charter by blocking or deviating the self-determination process. It is, therefore, especially important that the doctrine of 'transfer of powers' be operationalized so that a genuine decolonization process can be initiated pursuant to the resolutions of the General Assembly under U.N. auspices - if the process is to be free and fair, un-impeded by external interference, and therefore genuine.

In conclusion, we wish to reiterate our request that Resolution 70/100 adopted by the United Nations General Assembly last December be updated to include the important references to the action by the Assembly of French Polynesia on nuclear compensation, and to affirm the right of the Ma’ohi people to their natural resources, including marine resources and resources of the seabed.