Shots for the film 'Tula the Revolt' film completed in Curacao 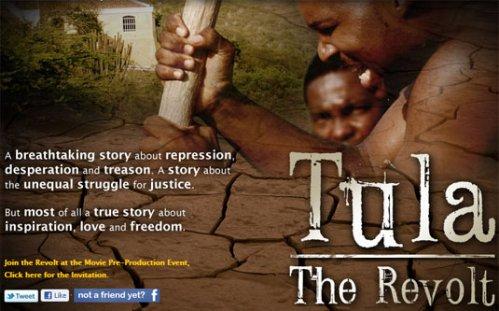 WILLEMSTAD — The 33 days of the shooting script for the firm ‘Tula the Revolt’ are over. In the coming months producers Jeroen Leinders and Dolph van Stapele will work on the post-production of the film.Expectations are that the film with Danny Glover, Henriëtte Tol, Jeroen Willems, Derek de Lint and Obi Abili as Tula in the leading roles can be seen in the theaters next year.

In the past six weeks more than 100 people from various nationalities on Curaçao worked on the film regarding the story based on facts of Tula, the leader of the large slave revolt on Curaçao in 1795.

To complete their production team on Curaçao for the film the producers also had a camera crew from America, a production team from England and stuntmen from Bulgaria come to the island. Van Stapele was especially surprised by the successful cooperation and the local talent. “Also the quality and flexibility of both the local and international actors were phenomenally good. Thanks to the input and support from all actors, crew, figurants, sponsors, investors and volunteers, I believe we have all ingredients to produce a strong story. It is now proven that Curaçao is simply capable of making a film”, said the producer.

In the coming four to five months the producers will work on the post-production of the film. Expectations are that this process will take place in England and will include many phases, among which the editing, the music composition, audio correction, special effects and color corrections.

Posted by Overseas Review at 10:04 PM No comments:

The Conference, which will be held in Apia, Samoa, in 2014 (date to be decided), will seek a renewed political commitment to address the special needs and vulnerabilities of the small island developing States by focusing on practical and pragmatic actions.  Building on assessments of the Barbados Programme of Action and the Mauritius Strategy for Implementation, the Conference will aim to identify new and emerging challenges and opportunities for sustainable development of those States, particularly through the strengthening of partnerships between small islands and the international community.

Building on the success and lessons learned from the recent Rio+20 process, Mr. Wu has offered the full support of the Department of Economic and Social Affairs.  That Department will work closely with Gyan Chandra Acharya, the United Nations High Representative for the Least Developed Countries, Landlocked Developing Countries and Small Island Developing States.  In supporting the Conference, the Department of Economic and Social Affairs will work with other United Nations departments, the regional commissions and the United Nations system as a whole, while mobilizing relevant intergovernmental organizations and major groups, to ensure that the Conference makes a concrete and meaningful contribution to the sustainable development of small island developing States.