"OKINAWA IS NOT A COLONY" - PREFECTURAL ASSEMBLY 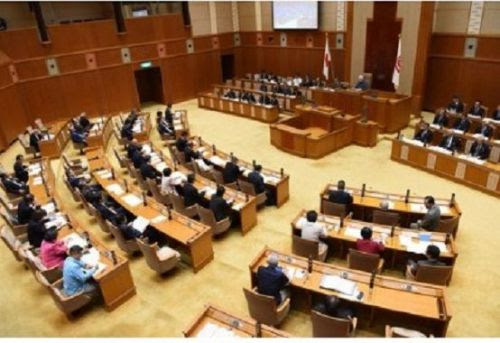 Furthermore, the Assembly stated that airborne training exercises continue while there are no signs of improvement to the U.S. military’s safety management systems.
It asserted that it absolutely cannot approve of the U.S. military’s contemptuous attitude toward Okinawans, and that the voices calling for the withdrawal of the Marines from Okinawa are becoming louder.
Moreover, the Assembly severely criticized the U.S. and Japanese governments, reminding them that Okinawa is not a colony.

In response to aircraft based at Futenma Air Station repeatedly experiencing trouble and emergency landings, on February 1 the Prefectural Assembly adopted a resolution calling for the immediate closure of Futenma Air Station and the relocation of the U.S. Marine Corps out of Okinawa or even out of Japan.
The resolution from February 1 and the new resolution are alike in that, for the first time since Okinawa was returned to Japanese sovereignty, they include the words: “Okinawa is not a colony.”]
This more recent protest resolution in response to the Osprey fuselage piece dropping to the ground asks for, (1) a thorough inspection into the cause of the accident and a public announcement regarding the results, (2) a halt to flights and training involving aircraft based at Futenma Air Station over private land, (3) the immediate closure of Futenma Air Station, and (4) a drastic revision of the U.S.-Japan Status of Forces Agreement.


The U.S. Marines in Okinawa did not report the fallen aircraft part until the Okinawa Defense Bureau made an inquiry about it.


This protest resolution states that the lack of notification from U.S. military to the Japanese government about the accident calls into question whether there was intent to conceal the incident.
The protest resolution is addressed to Prime Minister Shinzo Abe and the U.S. Ambassador to Japan William Hagerty, among others.
Posted by Overseas Review at 10:08 AM No comments: