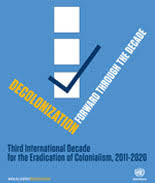 Statement of Judith L. Bourne, Esq.
to the Caribbean Regional of the United Nations Special Committee on Decolonization

I thank the Special Committee for this opportunity to present my views on this most important matter which impacts my home of the US Virgin Islands as well as the mostly small island dependencies on the list of Non-Self-Governing Territories.

I also thank the government and people of Grenada, for the gracious Caribbean hospitality that they have extended to me and to all of the participants at this seminar.

The theme of this seminar contains three significant concepts - accelerating decolonization, renewed commitment and pragmatic measures. I will focus on these three concepts as they relate to the NSGTs that are not the subject of sovereignty disputes, which require a different analysis.

In this 29th year of a specific focus by the UN on the eradication of colonialism, the penultimate year of the Third International Decade for the Eradication of Colonialism, why are we talking about increasing the speed of this process?

We do so because within this almost generation and a half, there has been one territory decolonized and one territory returned to the jurisdiction of the Committee on the recognition that it has not been effectively decolonized, leaving a grand total of zero percent change in the number of NSGTs.

To be perhaps uncomfortably frank, if Administering Powers felt that it was in their interest to encourage self-determination in the NSGTs that they administer, we would be in an entirely different situation.

Commitment to anything not rooted in these first principles encourages the erosion of the distinction between principles and ideals. And the commitment is not simply that of this Committee, but that of the UN as a whole. The responsibility for decolonization was recognized as that of the international community and was accepted by its foremost organization, the United Nations, which simply delegated to this committee the authority to directly oversee the process.

The invocation of pragmatism is both encouraging and worrying. Encouraging because it is almost invariably useful to base courses of action on reality. Worrying because the call for “pragmatic measures” implies that there has been a focus on some idealized path and that we now need to deal with the ‘real world’.

As the original of the UN document setting the theme and agenda of this seminar is in English, I have looked at the meaning of the word “pragmatic” in what I believe to be the leading dictionaries of the UK and the USA, which have been described as two countries divided by a common language. The OED gives the meaning as “Dealing with things sensibly and realistically in a way that is based on practical rather than theoretical considerations”. Miriam Webster defines it as “relating to matters of fact or practical affairs often to the exclusion of intellectual or artistic matters : practical as opposed to idealistic”.

In fact, for the last 29 years, the Committee, as a political body composed of member states of the UN, has not seen itself as able to address the apparent fact that the major obstacles to decolonization are the nations who maintain the NSGTs as colonies - their fellow member states. This is neither surprising nor appalling; it is simply one of many implicit but normally unspoken facts of international relations. However, that reality should not, and must not, undercut or weaken the fundamental right to self-determination or seek to re-define it out of effective existence.

Pragmatism calls for an examination of what factors would influence the Administering Powers to re-evaluate their interest in encouraging self-determination amongst their NSGTs.

The early history of the successful decolonization of more than 80 territories, most of which are now member countries of the UN, was propelled by the expressed will of the colonized population.

In February 1806, Frederic Tudor of Boston shipped a cargo of natural ice to Martinique believing that the people of that tropical island would welcome cool drinks and make him a fortune. What he did not realize was that, having no experience of ice-cooled anything, his potential customers had no interest in his ice, and it melted away unbought.

Similarly, many of the people of the NSGTs, having little or no knowledge of the three self-determination options, or of how a choice might affect their lives or their futures, and demonstrate no generalized impulse towards self-determination. This should not be seen as a lack of desire, but as a lack of information. I described examples of the confusion caused by this lack of information in the U.S. Virgin Islands in my presentation at the 2017 Regional Seminar in St. Vincent, copies of which I have available, both on paper and electronically, for those who may desire to read it.

What does this mean with respect to pragmatic measures?

The first aspect of the reality that must be addressed is not to assume that the people of the NSGTs do not want significant changes in their status. The reality is that they do not have sufficient accurate information to even begin to think about what options exist and what those options might mean for them.

The second aspect of this reality is that the Administering Powers that are not actively assisting their NSGTs in internationally recognized self-determination efforts are not likely to undertake such activities of their own volition. This is, of course, a politically sensitive assessment.

Thirdly, and as a consequence of the first two conclusions, the pragmatic method to manifest a renewed commitment to the principle of self-determination and to decolonization, and to move that commitment forward, must be a process which directly addresses the need for education in the NSGTs, which includes providing them with more regular contact with the international community, which does not depend on action by the Administering Powers and which is in concord with resolutions adopted by the General Assembly.

Fortunately, such measures have previously been set forth in detail in the “Plan of Implementation of the Decolonization Mandate 2006-2007" found in U.N. Document A/60/853; E/2006/75. This Plan of Implementation was presented by the then Chairman of this Special Committee, compiled and organized from the myriad of resolutions, statements and reports of the General Assembly, the Secretary-General, other U.N. bodies and this committee itself which speak to “innovative strategies [which] are necessary in order for the United Nations to fulfil its obligations to ensure the successful self-determination and subsequent decolonization of the remaining non self-governing territories through the assumption of a full measure of self-government.”[1] This Plan was welcomed and recognized as “important legislative authority” by the General Assembly in December 2006.[2]

While there may be differences of opinion about the causes of the lack of significant progress in the decolonization effort over the past 29 years, the theme of this seminar is evidence of a general agreement that such progress has not occurred. This more-than-a-decade-old plan remains sharply relevant and such commonly heard reasons for non-implementation as the lack of budgetary resources can be readily overcome by including the necessary resources in the budgetary process and advocating for their funding in accord with paragraph 20 of General Assembly resolution 73/123.

I urge this seminar to exhort the Committee to go “back to the future”, to reach back to this well-grounded, well-developed Plan of Implementation that was endorsed by the General Assembly twelve years ago and to have its staff begin implementation as a matter of utmost urgency.

Posted by Overseas Review at 3:15 AM No comments: