The future self-determination of Sint Eustatius was the subject of a constitutional forum organized by the civil society organization Brighter Path Foundation. The keynote speaker of the forum was International Governance Expert Dr. Carlyle Corbin whose presentation was entitled “The Application of self-determination after 10-10-10.” 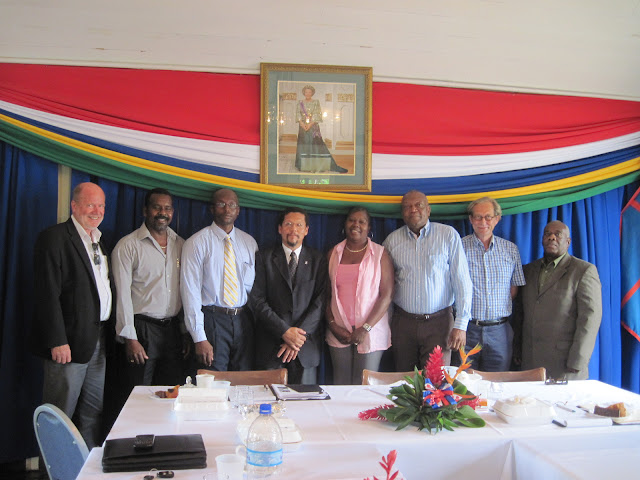 The date 10th October 2010 was when the erstwhile five-island ‘autonomous country’ of the Netherlands Antilles was dismantled. This resulted in two separate ‘autonomous’ countries of Curacao and Sint Marten, respectively. At that time, also, the three remaining islands of Bonaire, Saba and Sint Eustatius (Statia) became “public entities,” of the Kingdom of the Netherlands.

Corbin’s presentation focused on issues relevant to the self-determination process beginning with the political and constitutional composition of the non-independent Caribbean. He explained some of the various dependency, integrated and autonomous models presently in place across the globe, and assessed them against the internationally recognized standards.

The presentation also examined the relevant United Nations resolutions including the text of the original list of non self-governing territories adopted by the UN General Assembly in 1946, and subsequent resolutions through to present day on defining genuine self-government with absolute political equality. In this regard, the presentation made specific reference to the Decolonization Declaration of 1960 which established the self-determination process leading to decolonization, and which stressed the importance of the transfer of powers in advance of a genuine act of self-determination.

A highlight of the presentation was the reference to UN Resolution 1541 (XV) of 1960 which defined independence, free association and integration as the three legitimate models of political equality recognized under international principles. In this connection, the presentation went on to define the minimum standards for the three options, and to indicate where political changes have occurred over time in the Caribbean consistent with these standards.

Corbin provided a thorough explanation on self-governance indicators which had been derived from the extensive mandates of the United Nations from its inception, and which are being used as a measure to determine whether the present governance models meet international standards of full self-government. For integration, he identified the indicators according to the degree of political equality including equal status and rights of citizenship; degree of fundamental rights and freedoms without distinction; and the extent of political participation and representation in the metropole.

Regarding autonomous free association, Corbin referred to the extent of mutual consent and level of unilateral authority of the cosmopole over the associated country. He indicated that a determination should be made as to whether there exists the unilateral application of laws and treaties of the cosmopole to the autonomous country. He further noted that the extent of ownership and control of natural resources including marine resources is an important consideration. Freedom of the autonomous country to modify the political status and to determine its internal constitution without external interference was also identified as an important indicator. The degree of economic dependence on the metropole, and the nature of any military activities in the autonomous country were also cited.

Corbin proceeded to present current models of integration in place in island countries including the French department model of integrated department in the French West Indies, and the U.S. integrated model in place in Hawai’i in the Pacific. He compared these models to the present partial integration arrangement in Bonaire, Saba and Sint Eustatius which do not meet the minimum standards of integration with full political and economic rights. He noted that a full assessment of these models would be useful.

Regarding the autonomous models, Corbin provided information on the French, New Zealand and US models in the Pacific including Ma’ohi Nui/Fr. Polynesia and Wallis and Futuna, the Cook Islands and Niue, and Marshall Islands, Northern Mariana Islands, Palau and Micronesia, respectively. The models of the former West Indies Associated States with the United Kingdom, and Puerto Rico with the US, were also examined. He also examined the Dutch models of Aruba, Sint Maarten and Curacao, along with the emerging French collectivity models in St. Barts and French St. Martin. Of particular note was the explanation of the autonomous model of Greenland vis a vis the Kingdom of Denmark.

Corbin ended his presentation with a number of observations including the view that “any interest in a change of status suggests moving forward to a status of full political, economic and social equality.”

“These can be achieved,” he said “via independence, full autonomy or full integration.”

He emphasized that "full political integration, or an autonomous association, are acceptable models as long as the elements form a political arrangement of absolute political equality.” In the specific case of autonomy, he emphasized that it should be “on the basis of mutual consent between two equal partners without unilateral power of one party over the other.”


“Political, cultural and economic implications of these options of political equality differ depending on the choice,” Corbin said, and “the elements of each option should be studied closely so the people could make an informed decision.”

Posted by Overseas Review at 5:08 PM No comments:

ST. EUSTATIUS–The Community Centre was filled to capacity as Statians came out in numbers to discuss the pros and cons of the island’s current constitutional status.

Call for referendum at constitutional seminar

(from Daily Herald) ST. EUSTATIUS–The Community Centre was filled to capacity as Statians came out in numbers to discuss the pros and cons of the island’s current constitutional status.
The recently held constitutional seminar (July 9) organised by Brighter Path Foundation featured Carlyle Corbin, former minister of state for External Affairs of the US Virgin Islands, and an expert on decolonisation and people’s right to selfdetermination. He has two decades of experience as a United Nations’ expert on these subjects. He was joined on the seminar’s panel by Commissioner Koos Sneek and Island Council members Millicent Lijfrock-Marsdin and Reginald Zaandam of Statia; Benito Dirksz and Jeffrey Levenstone from Bonaire and Ishmael Levenstone of Saba; also, Director of the St. Eustatius and Saba Chamber of Commerce and Industry Carlyle Tearr and legal experts Anthony Nicolaas from Bonaire and Denicio Brison from St. Maarten. Moderators were Brighter Path founding members Xiomara Balentina and Lynette Anson. Island Governor Gerald Berkel, Commissioner Glenville Schmidt and Island Council members Franklin Brown, Reuben Merkman and Adelka Spanner were in the audience.

Many Statians are concerned about the island’s current status as “special entity” of The Netherlands. Not only is its present status not what the population voted for in the 2005 referendum, but many people also feel that it has turned out very different from what they expected. In addition, the Dutch government wants to go ahead with changing the Constitution according to these lines.

Brighter Path Foundation organised this seminar to increase public awareness of the constitutional changes as they relate to Statia. Since Bonaire and Saba are in the same situation, the foundation believed discussions would benefit from the input from these islands as well.

Corbin explained the UN’s views on the implementation of the right to self-determination. The three recognised models are full independence, self-governance (including free association with another state) and full integration into the (formerly) controlling country. As a UN member state, The Netherlands has legally committed itself to developing self-governance in all territories under its control including Statia. This means that the island’s population has to be able to freely determine its political status. However, Corbin stated the UN had already taken the former Netherlands Antilles off the list of territories awaiting self- determination as they were considered to have obtained autonomy since the implementation of Statute of 1954.

Many Statians feel they did not have any say in the island’s current constitutional status, and the issue of a new referendum came up frequently during the discussion. It was repeatedly suggested that a signature drive could convince the Island Council to organise a referendum. Questioned about this Council Members Lijfrock- Marsdin and Zaandam said they were both in favour of a new referendum.

Dirksz said it seemed that the Dutch government only had two options on offer: autonomy or becoming a Dutch municipality. Commissioner Sneek said there was no alternative to Statia’s current status. “This is what we have to work with,” he said. However, when someone in the audience asked the room during the lively and animated discussion if they were happy with the existing status, the answer was a resounding “no.”

Balentina said that followup events and activities are being developed “to ensure that the population of Statia can make an informed decision about their constitutional future.”
Posted by Overseas Review at 12:00 AM No comments: