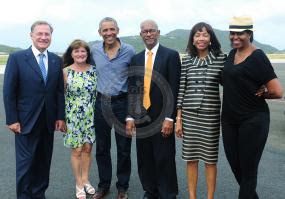 
Today, the Governor and Premier, accompanied by their spouses, bade farewell to the Obamas, who ended their ten-day private stay in the BVI. The Obamas said they enjoyed their visit tremendously and hope to return with their daughters in the near future.

Premier Smith said, “I have followed President Obama’s two terms in the White House and I am filled with admiration for his accomplishment. The fact that the Obamas chose the BVI for their private vacation after eight years in the White House speaks to the high regard in which the BVI and its tourism product are held.”

Posted by Overseas Review at 12:07 AM No comments: