Schotte Will Not Cooperate With The Formation Of An Interim Government

Demissionary Prime Minister Gerrit Schotte opposes Governor Frits Goedgedrag and expressed his displeasure about the decision to form an interim government. According to the Prime Minister is the decision of the Governor ‘inadequately reasoned’. Schotte therefore will not cooperate.

Schotte stressed that the problem lies with the Parliament and that there is no break in the incumbent demissionary government. Therefore there would be no reason for an interim government to be formed according to the Prime Minister.
Interference

In addition, Schotte said that Goedgedrag chooses sides with his decision. “I think you stand firm in the existing political divisions in our country, while your performance must be directed to promote unity. I ask you urgently to cease your involvement in the formation of an interim government. ”
Formateur

WILLEMSTAD - The impasse in the Curaçao Parliament, whereby the president of parliament did not give the political parties enough space to discuss the situation is against the spirit of parliamentary democracy.
This is what Governor Frits Goedgedrag has noted in his letter to Prime Minister Gerrit Schotte in which he send Schotte’s cabinet home immediately.
Based on the basic principles of democracy and good governance the Governor has appointed a formateur to form an interim government. The interim government will have a few important assignments namely:

According to reports, demissionary Prime Minister is refusing to step down. He announces that on Wednesday they will have a Council of Ministers meeting to assess the situation and see what will happen next.

WILLEMSTAD – Governor Frits Goedgedrag has designated Dito Mendes de Gouveia as formateur for an interim government. Goedgedrag accepts the motion that has been delivered by Vice President Anthony Godett from the divisional parliament. A majority of the Parliament wants an interim cabinet.


The Governor responded to the Godett’s request by holding exploratory talks with the Vice-Chairman of the Advisory Board, Carl Grüning, Ivar Asjes, Dean Rozier, the leaders of the political parties in Parliament, Premier Gerrit Schotte. The orientation phase was completed yesterday.

Based on the outcome of the talks and advices given to him, the Governor asked Dito Mendes de Gouveia to consider what opportunities exist to form a cabinet that can count on a majority in Parliament. The emphasis is on the preservation of political calmness in Curaçao and the relationship of Curaçao with the other countries of the Kingdom.

In addition, the formateur must take into consideration the preparations for the parliamentary elections on October 19, initiate measures leading to a restoration of the democratic system and the financial and economic confidence in Curacao. Also, Mendes de Gouveia must take measures, that ensures an orderly development of the process of ‘screening’ of candidate ministers after elections. Mendes de Gouveia is requested to report his findings by Friday to the Governor.

The 'Black Count' Cuts A Fascinating Figure - A book review 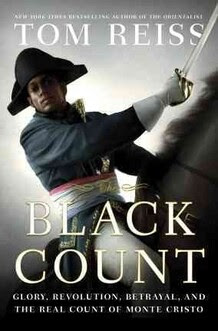 The novelist Alexandre Dumas — the one known for penning The Count of Monte Cristo and The Three Musketeers — is often referred to as "Alexandre Dumas, pere." This is to distinguish him from his son, also a writer, who is identified as "Alexandre Dumas, fils." The thing is, there is an even older Alex Dumas who, while not a professional writer, made quite a name for himself in Revolutionary France. For the father of Alexandre Dumas, pere, the sword was mightier than the pen, and this larger-than-life figure's story heavily influenced the fiction of his literary offspring.

Read the full book review at:
Repeating Islands
Posted by Overseas Review at 11:18 AM No comments: