U.N. Secretary-General: Decolonisation must be guided by the United Nations Charter and U.N. General Assembly resolutions 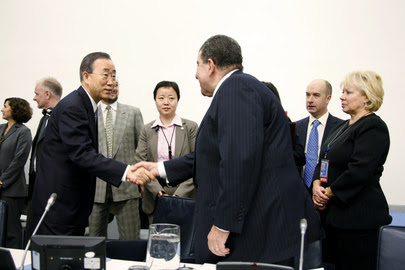 File photo: Secretary-General Ban Ki-moon (left) greets members of the Special Committee on Declaration prior to the opening of the first organizational meeting on 24 February 2011.

Following is UN Secretary-General Ban Ki-moon’s message, as delivered by Jens Toyberg-Frandzen, Interim Assistant Secretary-General for Political Affairs, to the opening of the 2015 session of the Special Committee on Decolonization, in New York today:

I would like to convey my warmest greetings to the members of the Special Committee today as it begins its session in 2015. This year marks the fifty-fifth anniversary of the Declaration on the Granting of Independence to Colonial Countries and Peoples, as well as the midpoint of the Third International Decade for the Eradication of Colonialism.

The success of our efforts continues to depend on the political will of all involved. Throughout the year 2014, the Committee undertook important steps to pursue its work on decolonization. In March, the Committee dispatched a visiting mission to one of the Non-Self-Governing Territories, namely New Caledonia, the first such mission since 2007.

The rounds of dialogues that were initiated in 2013 between the Bureau of the Committee and each of the four administering Powers, as well as various other stakeholders, were successfully repeated last year. Productive cooperation among all concerned, particularly the Committee, the administering Powers and the Non-Self-Governing Territories, is on the rise. Let us seize this momentum and move the decolonization agenda forward.

Today, 17 Non-Self-Governing Territories across the globe remain under the purview of this Committee. I call on the international community to address the issue of self-government and find innovative and practical ways to implement the decolonization process. In this endeavour, we shall be guided by the principles enshrined in the United Nations Charter and the relevant General Assembly resolutions.

As we celebrate this year the seventieth anniversary of the United Nations, we also mark 70 years in advancing the Organization’s historic decolonization mandate. Yet this process is still not complete. Please rest assured that the Secretariat will continue to assist the Special Committee in its important work. I wish the Special Committee every success in the year ahead.

Posted by Overseas Review at 12:35 PM No comments: