Trump has suspended all US refugee programmes and banned immigration from seven Muslim-majority countries, three of which are AU members 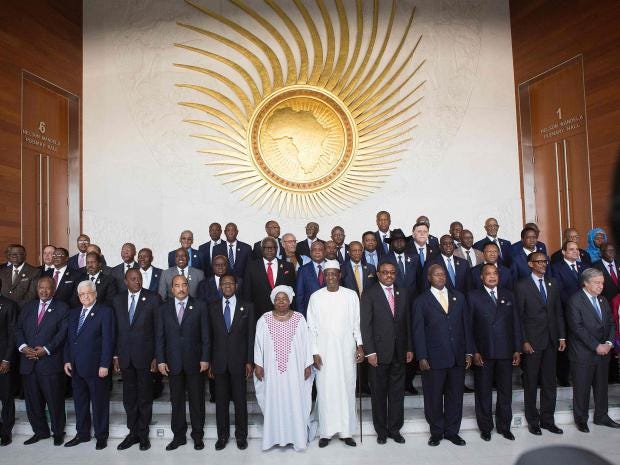 African Heads of State pose for a group photo ahead of the start of the 28th African Union summit in Addis Ababa on 30 January, 2017 AFP


The head of the African Union has criticised Donald Trump’s ban on immigration from some Muslim-majority countries, saying it presents “one of the greatest challenges” for the continent.

As representatives of the AU’s 53 member states met in Addis Ababa for a two-day summit, the chief of its commission said the bloc was entering “very turbulent times” after the US President’s election.

“The very country to which many of our people were taken as slaves during the transatlantic slave trade has now decided to ban refugees from some of our countries,” said Nkosazana Dlamini-Zuma.

ADDIS ABABA – A top African Union official denounced on Monday the United States’ recent travel ban affecting seven Muslim-majority countries, saying that the same country that once took African slaves by the million was now denying entry to refugees from the continent.

Chairperson of the AU Commission Nkosazana Dlamini-Zuma said that the ban decreed by US President Donald Trump was one of the greatest challenges to Africa’s unity and solidarity.

“The very country to which many of our people were taken as slaves during the transatlantic slave trade has now decided to ban refugees from some of our countries,” said Dlamini-Zuma at the AU’s annual summit held in the Ethiopian capital, Addis Ababa.

“What do we do about this?” she added.

The travel ban, which was issued on Friday, affects three African countries (Libya, Somalia and Sudan) as well as four nations in the Middle East (Syria, Iraq, Yemen and Iran).

United Nations Secretary-General Antonio Guterres, who was also present at the summit, said that African countries host the largest refugee populations in the world.

“African borders remain open for those in need of protection when so many borders are being closed, even in the most developed countries in the world,” said Guterres, to the applause of the plenary assembly.

The executive order, titled “Protecting the nation from foreign terrorist entry into the United States,” has caused domestic waves of outrage manifested in multitudinous protests across dozens of US airports.

It also drew sharp rebukes from various members of the international community, including several key US allies such as Canada and Germany.

Posted by Overseas Review at 11:56 AM No comments: