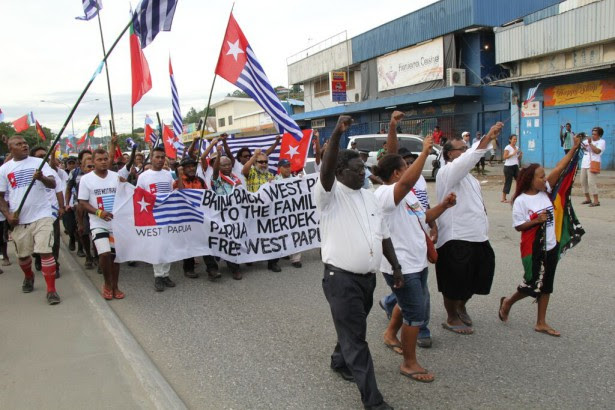 Leaders from the Church of Melanesia, and Lilly Chekana and Grace Hilly from the Solomon Islands Solidarity for West Papua, lead a march in Honiara in support of West Papua becoming a member of the Melanesian Spearhead Group on June 19. (WNV/ Pasifika collection)

Markus Haluk’s eyes are moist. We are standing inside a portside warehouse in Honiara, the capital city of the Solomon Islands. Haluk carefully unwraps the first of five large 60 pound packages encased in hessian. Inside each parcel are two large A4-sized books, parts of a massive paper petition. Each book is around 16 inches thick — they make a dictionary look like a comic book. Haluk was the lead organizer tasked with collating the hefty tomes and getting them safely out of West Papua. Yosepa Alomang, a 50-something-year-old stalwart of the West Papuan independence movement, worked alongside him and she is also now in the warehouse. Alomang reaches out and touches the books. Turning to me she says, “These are the blood and bones of our people.”

Alomang means what she says. During the signature-raising campaign which took place between March and May 2015, Indonesian security forces shot dead 32-year-old Obangma Giban, a village chief from Yahukimo. In the month of May, alone, 487 activists were arrested for participating in the campaign. Some of those were tortured. Officers from the Mobile Police Brigade in Manokwari, part of a national Indonesian paramilitary police force, stubbed out cigarettes on Alexander Nekenem’s body while the head of the Manokwari Regional Police, Tommy H. Pontororing, denied him and his compatriots access to lawyers. Police also demolished communication posts at places like Cendrawasih University, where people could go to sign the petitions. Countless scores were savagely beaten.

Posted by Overseas Review at 10:28 PM No comments:

To West Papua, ULMWP and all the Melanesian and Pacific family,

Papua New Guinea (PNG) has rejected my application for a visa to enter the country for the second time. I am disappointed that PNG as a democratic country which values democracy, freedom and justice has come to this decision. The first, I was informed that the issue was an administrative matter and the reason given was that I did not complete the necessary PNG immigration documents and procedures.

As per an invite by the Governor of the National Capital District (NCD), Hon. Powes Parkop to attend a human rights refugee conference, and also take part in other events including PNG’s 40th independence celebrations, and the Pacific Island Forum in my capacity as the spokesperson for the United Liberation Movement for West Papua (ULMWP); I launched a full visa application which was checked by my lawyer and I preceded with flight bookings.

A few hours before I was due to board my flight from London Heathrow to Port Moresby this week, I found out that the PNG immigration rejected my visa application, and as a result, I have cancelled this trip to PNG. There were no proper details or formal explanation from the PNG High Commission in London as to why my visa application was rejected.

I respect the decision by PNG Government and its immigration department, but I hereby appeal to the government to not penalise the struggle of the people of West Papua. I strongly urge Prime Minister, Peter O’Neill and all Pacific leaders to stand firm as Pacific leaders and support the issue of West Papua at the leaders meeting next week.

West Papua is one of five top priority areas on the Pacific Island leaders Forum agenda, and I appeal to the people of PNG and the Pacific to rally your support on the recommendations set before the leaders.

We the ULMWP are calling on our Pacific leaders to form a high level PIF delegation to undertake a fact finding mission to investigate the human rights abuses in West Papua; and to strongly urge the United Nation to appoint a special envoy on human rights to West Papua.

There is growing support in the Pacific, and I want to personally thank my Pacific brothers and sisters who are always supportive of our freedom journey. Please continue to support the people of West Papua in our struggle for freedom. Thank you also to friends in Australia, New Zealand, and those globally who continue to support West Papua freedom movements.