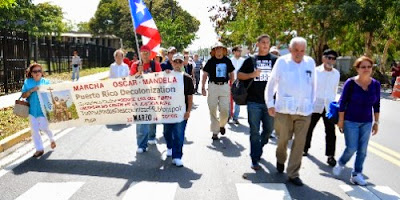 On the day that Puerto Rico (PR) celebrated the abolition of slavery, March 22, 2014, we had our First Oscar – Mandela Protest in Puerto Rico.  It was a huge success!  Click on the link below to see TeleSur's coverage of our protest and 2 others that occurred on that day:
http://www.dailymotion.com/video/x1ja9pi_conmemora-pr-abolicion-de-esclavitud-exige-libertad-para-lopez-rivera_news


Today, Monday, June 16, 2014, we are having the first of two protests called, The First Oscar – Mandela Protests in New York City.  The second one will be next Monday, on the very day that the United Nations holds its annual hearing on the decolonization of Puerto Rico - June 23, 2014.


Puerto Rico has been a colony of the United States for 116 years.  Before that, Puerto had been a colony of Spain for 405 years.  Puerto Rico has never been an independent nation.
Despite the fact that colonialism violates the United Nations’ (UN) Universal Human Rights Resolution, and its 1960 Resolution 1514 (XV) that pronounces that colonialism is a crime against humanity because of its threat to world peace, the government of the United States (US) has ignored thus far 32 UN resolutions asking it to immediately decolonize Puerto Rico.  The UN has specifically asked the US to immediately release from prison Puerto Rican political prisoner of 33 years Oscar López Rivera in the more recent resolutions.  Martin Luther King would have explained why this way, “Injustice anywhere is a threat to justice everywhere.”  It is noteworthy to mention that these resolutions are approved by over 90% of the UN.  If the United States really is about promoting democracy around the world, here’s an excellent example of her not practicing what she’s preaching!
Those of us who have had the tenacity to study the real Puerto Rican history since 1493 are convinced that 116 years of US colonialism means that the US government has no intentions of ever decolonizing Puerto Rico.  So what is a realistic way to force the US to comply with the 32 UN resolutions?
We need to find a way to unite all those who agree with the UN that colonialism is a crime against humanity to peacefully protest for the decolonization of Puerto Rico.  These protests must be permanent, so that more protesters may unite, as their level ofindignation grow, each year that the US government ignores yet another UN resolution to decolonize Puerto Rico.  One thing is irrefutable.  The US government does not believe in justice for all, after 116 years of Puerto Rico colonialism!  More at
www.TodosUnidosDescolonizarPR.blogspot.com
Posted by Overseas Review at 9:02 AM No comments: