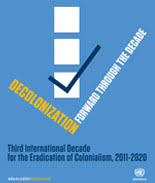 The United Nations (U.N.) has begun to release its informational Working Papers for 2015 on the 17 non self-governing territories. Below are links to the three dependencies administered by the United States in the Caribbean formally designated by the U.N. The reports are prepared annually by the Decolonisation Unit of the Department of Political Affairs, and are used by the member States of the U.N. Decolonisation Committee as they review the political, constitutional, and socio-economic developments in each territory and make recommendations to the General Assembly on measures to advance the decolonisation process. To view the U.N. reports on the United Kingdom-administered dependencies click
on:   United Nations publishes 2015 reports on British dependencies.

For analysis of the U.N. role in the decolonisation process see the following:


A Conversation on the Challenges to Contemporary Decolonisation

Posted by Overseas Review at 5:20 PM No comments: