Former Virgin Islands Government Representative for External Affairs Dr. Carlyle Corbin has been named an Independent Expert to the United Nations (U.N.) Pacific Regional Seminar which convenes from 31 May to 2nd June in Managua, Nicaragua. The Seminar brings together representatives of governments of United States, British, French and New Zealand territories worldwide, and includes the governments of the U.S. territories of American Samoa, Guam, and the U.S. Virgin Islands. Both U.S. Pacific territories are participating in the conference but the U.S. Virgin Islands is absent. Representatives of United Nations member states and agencies, decolonisation experts, and civil society are also in attendance. 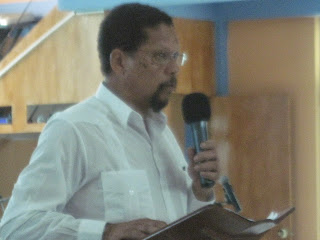 The purpose of the seminar is to review the situation with respect to the seventeen territories, including the issue of support from various organizations within the U.N. system and other organizations. The Seminar’s conclusions and recommendations will be considered by the U.N. Special Committee at its June substantive session, transmitted to the Fourth Committee of the General Assembly in October, and finally to the General Assembly in December.

Dr. Corbin's presentation before the seminar is entitled Decolonisation: The Unfinished Agenda of the United Nations He began his government service as an advisor to Governor Cyril E. King, and later served as the Washington Representative of Governor Juan Luis. He went on to serve as Representative for External Affairs where he represented the territory in U.N. and other international bodies under Governors Alexander A. Farrelly, Roy L. Schneider, and Dr. Charles W. Turnbull  before finishing his government service.

He presently lectures widely, and writes extensively, on political and constitutional development issues, with specific reference to small island territories, autonomous countries and integrated jurisdictions in the Caribbean and the Pacific.