Petitioners from the Non-Self-Governing Territory of French Polynesia expressed alarm today over the consequences of France’s nuclear testing in the Pacific region, as the Fourth Committee (Special Political and Decolonization) considered decolonization issues for a second day.

Maxime Chan of the Association Te Ora Naho, said France has a duty, in accordance with its own constitution, to remedy the damage it caused in the Territory through nuclear testing. He recalled that 368 instances of radioactive fallout were reported and that radioactive waste was discharged into the ocean, in violation of international rules on such material.

In a similar vein, Taaroanui Maraea, President of the Maòhi Protestant Church of French Polynesia, said that such crimes against humanity have caused untold sickness and death among the Territory’s people. Francois Pihaatae of the Pacific Conference of Churches echoed that sentiment, calling upon the Human Rights Council’s Special Rapporteur to undertake a fact-finding mission to Ma’ohi Nui ‑ French Polynesia’s indigenous name ‑ saying the Territory continues to face the spill-over effects of the tests.

Many petitioners noted that the impact of French nuclear testing is omitted from United Nations resolutions and working papers. Loïse Panie of the Panie Genealogy Office, said it is disturbing that language was deleted from the relevant General Assembly resolution 72/101, and called for that language to be restored. 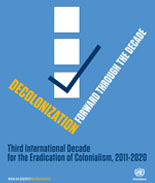 Other petitioners from the same region also stressed that France has been able to establish a proxy territorial leadership through a distorted electoral system, with Teumere Atger describing France’s unilateral authority over French Polynesia’s electoral system as a modern colonial arrangement. “This is why we ask the Non‑Aligned Movement member States to stand tall on their principles and to remember: “You have been where we are right now,” stressed Steve Chailloux, another petitioner.

However, Lana Tetuanui, Chair of the French extra-parliamentarian follow-up commission on financial compensation for the victims of nuclear testing, said France took a big step forward by apologizing for its nuclear activities in the region, and called upon all to move forward.

READ THE FULL PRESS RELEASE AT:

Posted by Overseas Review at 9:14 AM No comments: