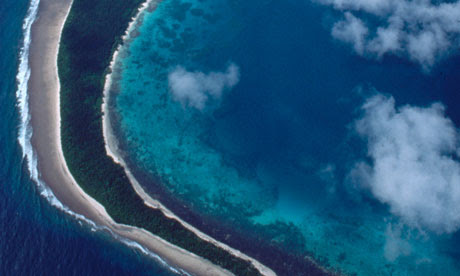 Part of the Chagos archipelago. The UN tribunal could challenge Britain's declaration of a marine protected area and lead to the return of the Indian Ocean islands' exiled inhabitants. Photograph: Corbis
Britain's colonial-era decision to sever an Indian Ocean archipelago fromMauritius and turn it into a US military base will have to be justified before an international tribunal – a process that could lead to the return of the islands' exiled inhabitants.
The unexpected ruling this month by the permanent court of arbitration in The Hague that it can hear the case is a challenge to the UK's unilateral declaration in 2009 of a marine protected area around the Chagos Islands.
Decisions by the tribunal, which arbitrates in disputes over the United Nations law of the sea, are binding on the UK. At the preliminary hearing the UK's attempt to challenge the court's jurisdiction was defeated. Britain is now obliged to explain highly sensitive political decisions dating back to 1965.
The legal battle, begun more than two years ago, raises fundamental questions about who has sovereignty over the Indian Ocean territory. Mauritian government officials believe it could lead to the unravelling of Britain's disputed claim and the eventual return of the islanders.
The Mauritian prime minister, Navinchandra Ramgoolam, has also alleged that the decision to establish a 545,000 sq mile marine reserve was carried out in defiance of assurances given to him at the time by the then UK prime minister, Gordon Brown.
Talking to the Guardian in London, Ramgoolam said: "We welcome the fact that the UN tribunal will have the whole case before it when it next meets. Never before have [the UK] had to explain why they detached theChagos Islands from Mauritius." 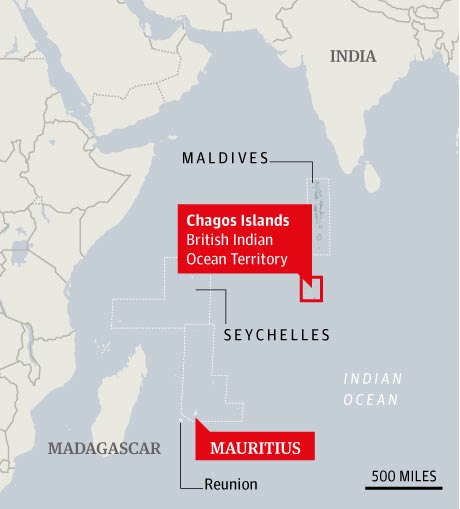 In 1965, three years before Mauritius was given its independence, the UK decided to separate the Chagos Islands from the rest of its then Indian Ocean colony. The Mauritian government claims this was in breach of UN general assembly resolution 1514, passed in 1960, which specifically banned the breakup of colonies prior to independence.
The Chagos archipelago was subsequently declared to be part of the British Indian Ocean Territory (Biot) from which, in 1971, most of the 1,500 islanders were deported. The largest island, Diego Garcia, was then leased to the US as a strategic airbase. The lease is due to be renegotiated by December 2014.
"I was taken completely by surprise when the UK high commissioner came to see me [in 2009 to announce creation of the marine reserve]," the Mauritian leader explained.
"I said I was about to go and meet the [British] prime minister in Trinidad. I was on very good terms with Gordon Brown. I told [Brown] you must put a halt to the marine protected area.
"Gordon Brown said he would put a hold on the whole thing. He gave formal instructions to David Miliband [then foreign secretary] not to go ahead with it. But David Miliband ignored it. He wanted to show he was doing something for the environment."
A spokesman for David Miliband denied there had been any internal differences within the UK government. The spokesman said: "The marine protected area has been a great step forward and went through all proper government processes."
Mauritius does not recognise the 545,000 sq mile marine protection area (MPA) that Miliband set up around the islands before Labour lost power in 2009. According to Ramgoolam, the government was not properly consulted and Mauritians were denied the right to exploit waters they have fished for decades.
His government has said it fears that the marine zone effectively prevents any future resettlement by Chagossians because it does not allow any fishing in the zone. Fishing on around the island would be the only realistic means of living there.
"By creating the protected marine area, Britain did not take into account Mauritius's rights and those of the Chagossians it evicted from Chagos," said Ramgoolam.
Concern is also growing in Mauritius that the MPA, which is a biodiversity hotspot of global importance, is a "sham". It is patrolled for around six months of the year by a 35-year-old ocean-going tug which takes two days to cross the protected area.
However, an exemption in the MPA allows people from the US nuclear base on Diego Garcia to continue fishing. In 2010, more than 28 tonnes of fish was caught for use by personnel on the base.
"Mauritius is not opposed to a marine protected area. On the contrary, we support conservation. We are very happy to work against illegal fishing," said Ramgoolam.Further doubts about the real intentions of the Foreign office were raised by a 2010 WikiLeaks cable in which Colin Roberts, the FCO's director of overseas territories, told the US state department that there would be no "Man Fridays" left on the islands following the establishment of the MPA and that establishing the park would, "in effect, put paid to resettlement claims of the archipelago's former residents". He added: "We do not regret the removal of the population." Some conservationists claim they were misled by the UK government. "I now regret my support of the marine sanctuary", said TV conservationist Ben Fogle.
The US-based Pew conservation group was instrumental in setting up the marine protected area, convincing many other British international conservation groups to support its "no take policy". Since then, many have supported the principle of the native Chagossians being given the right to return but most still support the MPA as it stands.
The European court of human right's decision last December that it had no jurisdiction to examine the Chagossians' claims that they been deprived of their right to return to the islands was widely seen as blocking off the main legal avenue for redress. The court ruled that because the islanders had received compensation in the 1980s, they had effectively renounced their rights.
But the legal confrontation at the permanent court of arbitration raises more fundamental issues of national sovereignty and transforms the issue into an inter-state dispute that resembles Anglo-Argentinian rows over the Falklands.
It is being fought within the arcane legal territory of the United Nations Convention on the Law of the Sea (Uunclos), an area where the UK could be at disadvantage.
While Mauritius and the Seychelles have put in mutually agreed claims for large tracts of the nearby seabed, the UK does not appear to have put in any counter proposals to the UN commission on the limits of the continental shelf.
The Foreign Office said it was "disappointed" with the tribunal's decision. "It seems out of sync with other, similar cases and may slow the process down," it said. "However, this is only a procedural decision. It does not address the substance of the issues at hand – neither the arbitral tribunal's jurisdiction nor Mauritius's claim. We have no doubt about our sovereignty of Biot, and are confident that Mauritius' claims are without merit."
On the question of the marine reserve, the Foreign Office added: "The no-take MPA around the British Indian Ocean Territory (Biot) is the largest no-take MPA in the world. The MPA provides refuge and breeding sites for migratory and reef fish, marine mammals, birds, turtles, corals and other marine life. The MPA will help reduce regional loss of biodiversity and, it is hoped, in replenishing fish stocks in the Indian Ocean.
"The decision to create the MPA followed a full international consultation process, and careful consideration of the many issues involved."
Posted by Overseas Review at 8:49 AM No comments: