Denmark will not apologize for slavery in the former Danish West Indies; CARICOM invites Denmark for reparatory dialogue, identifies six key areas to be the focus of diplomacy and action

"We note that some countries express an apprehension in addressing the issue of remedial action despite this overwhelming evidence. We note that others appear to practice a sort of selectivity of memory of the objective reality of their role in this difficult and tragic period of history." -

Official Address of the Government of the  U.S. Virgin Islands to the United Nations World Conference against Racism, Durban, South Africa (September, 2001). 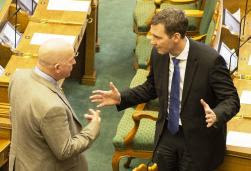 The government of Denmark recognizes the evils of slavery in its past, but it will not issue a formal apology or pay reparations to the U.S. Virgin Islands because there are no living former Danish slave owners or slaves to apologize or to apologize to, Denmark’s foreign minister said last month.

The formal statement came after the small far-left Danish political party Enhedslisten, or Unity Party, in November called on the government of Denmark to apologize for its role in the transatlantic slave trade. The Unity Party cited discussions with St. Croix activists and president of the African Caribbean Reparations and Resettlement Alliance, as well as a V.I. Legislature committee hearing on the topic.

The party, a coalition of several smaller parties called "Enhedslisten" or "Unity Party," or Red-Green Alliance, controls 12 seats in the 175-seat Danish parliament, making it the fifth largest party in parliament, and the fourth largest left of center party. It is a member of the current governing coalition of parties.

"Denmark has a gruesome history with active involvement in slave trade," Unity Party foreign affairs spokesperson, Nikolaj Villumsen, said in a Danish radio interview, according to the Post. "An official apology is important for two reasons. One is to pay sympathies to the descendants of slaves and the other reason is to have a debate in Denmark about our slavery past," the Post quotes him as saying.

But that view is not universal. The far-right Dansk Folkeparti, which has 22 seats in parliament, said that Denmark shouldn't be held responsible for something that happened "200 years ago." DF spokesperson Soren Espersen told Politiken newspaper in Denmark.

A statement issued following a meeting of the executive of the Commission on Monday, noted that a call had been made for the former slave-owning nations of Europe - principally Britain, France, Spain, Portugal, the Netherlands, Norway, Sweden and Denmark - to engage Caribbean governments in reparatory dialogue to address the living legacies of these crimes.

CARICOM Secretariat, Turkeyen, Greater Georgetown, Guyana) Public Health was one of the key issues identified by the CARICOM Reparations Commission to receive reparatory diplomacy and action. This disclosure was made by Chairman of the CARICOM Reparations Commission Professor Sir Hilary Beckles, at a press conference on Tuesday following a meeting of the representatives from the Commission with law firm Leigh Day on Monday at the UWI Mona.

According to Professor Beckles “the African descended population in the Caribbean today has the highest incidence in the world of chronic diseases such as hypertension and type two diabetes.” He said it was the direct result of their nutritional exposure, endemic inhumane physical and emotional brutalization and other aspects of the stress experience of slavery and post slavery apartheid.

Education was the second of the six issues identified. The Commission Chairman stated that at the end of the colonial period the British left the African descended population in a state of general illiteracy. He noted that this illiteracy continued to plague Caribbean societies and accounted for significant parts of their development challenges.

Speaking to cultural institutions, Professor Beckles said there was no development of institutions such as museums and research centers to prepare Caribbean citizens for an understanding of their history.

He also spoke of cultural deprivation as another issue that needed to be addressed and outlined that the primary cultural effect of slavery was to break and eradicate African commitment to their culture.

He stated further that African culture was criminalized and pointed to how Caribbean people were affected by cultural deprivation. He said this included low ethnic self-esteem; the devaluation of black identity; broken structures and diminished family values; delegitimisation of African derived religious and cultural practices, and disconnection from ancestral roots and culture.

Psychological trauma was another area identified by the Commission that needed to be addressed. According to Professor Beckles during the time of slavery, Africans were classified in law as non-human, chattel, property and real estate. He said they were denied recognition as members of the human family by laws and practices derived from the parliaments and policies of Europe. This history, he said, has inflicted massive psychological damage upon African descendants and is evident daily in social life.

The sixth issue which the Commission said needed to be remedied was that of scientific and technological backwardness. It was highlighted that for 400 years the policy of Britain and Europe had been that the Caribbean should not participate in any manufacturing or industrial process, and should be confined to the production of raw materials.

This policy, according to Professor Beckles “has rendered the Caribbean a technologically and scientifically ill-equipped civilization for which it continues to experience debilitating backwardness in a science and technology globalized world.” Additionally he said that the subjection of the Caribbean to this state has denied Caribbean youth membership and access to an enhancing science and technology culture that has become the world youth patrimony.

It was also explained by the Commission Chairman that the argument that CARICOM should request reparatory dialogue with beneficiary slave-owning European states with a view to formulating a new development agenda for the Caribbean was reaffirmed.

The next meeting of the full commission will be in January 2014 and it is anticipated that its first interim report will be ready for submission to the CARICOM Heads of Government meeting in February 2014.

Posted by Overseas Review at 10:19 AM No comments: