Great Bay/Marigot — St. Martin's cultural and community activist Shujah Reiph was the guest speaker at a town hall meeting in St. Eustatius on Saturday, November 3, 2012, according to Xiomara Balentina, president of the St. Eustatius/ St. Maarten based Foundation the Brighter Path.

The meeting which was organized by the Brighter Path Foundation is part of an ongoing awareness campaign about the constitutional situation of St. Eustatius, confirmed Balentina.

According to the president the people of St. Eustatius are very much concerned about the various changes taken place since the new constitution was established. 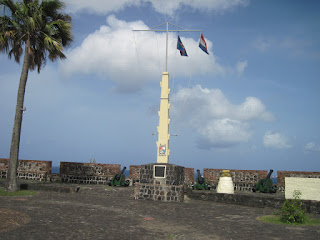 "Reiph was invited to address the theme Culture and ten, ten, ten, dealing with the partial integration of St. Eustatius into the Netherlands and the consequences it has had on the culture," said Balentina.

Reiph's presentation was broken down into two main points, "the undermining of the Statian nation's cultural identity/way of life and what the structural and historical reinforcement of colonialism will mean for the Statian nation."

The ninety minutes program included opening remarks by Xiomara Balentina, the main presentation by Shujah Reiph and a question and answering session by the general public.

"We were very pleased with attendance and we want to thank our partners who made the evening possible, Windward Island Airways (Winair), Country Inn, The Old Gin House, Super Burger and the people of St. Eustatius," concluded Balentina.

A number of people present voiced their dissatisfaction with the special municipality status governed by the Netherlands since 10 10 10. "All we have seen is a serious increase in taxes, since the change of status" said one entrepreneur present at the meeting.

The well attended evening saw a cross-section of the Statian population including educators, entrepreneurs, students, professionals and government officials. The town hall meeting was held at Super Burger in Oranjestad.
Posted by Overseas Review at 9:47 AM No comments: