Major rally against Henoko relocation to be held May 17 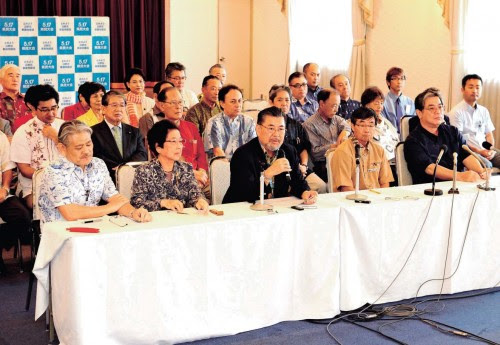 Representatives of the group organizing the May 17 rally against the relocation of a Marine Corps base to Henoko speak about the importance of the upcoming event during a press conference on April 30 at Southern Plaza Kaiho in Naha. (Front row from left) Chokei Taira, Kiku Nakayama, Morimasa Goya, Susumu Inamine, and Norio Oshiro.
Ryukyu Shimpo
A group of civic leaders opposing the relocation of U.S. Marine Corps Air Station Futenma to Henoko in Nago announced at a press conference in Naha on April 30 that a major rally against the base construction will be held on May 17 at 1 p.m. at Okinawa Cellular Stadium in Naha. The organizers, who include members of the prefectural assembly, civic groups, and the business community, said they expect the event to draw at least 30,000 participants, revising their earlier estimate of around 10,000. Okinawa Governor Takeshi Onaga has expressed his intention to participate in the rally which will be held under the banner, “70 years after WWII – Stop the construction of a new base in Henoko.”
Prior to the press conference, the organizers established an action committee, which is composed of: Tatsuhiro Oshiro, a writer who has won the prestigious Akutagawa Prize; Kiku Nakayama, chairperson of the Shiraume Alumni Association of the Okinawa Daini Women’s High School; Susumu Inamine, mayor of Nago city; Morimasa Goya, chairman of Kanehide Group; Chokei Taira, CEO of Kariyushi Group; and Norio Oshiro, chairman of the trade union Rengo Okinawa.
The representatives will visit Tokyo on May 24-26 to deliver a resolution against the base construction to the Japanese prime minister’s residence and other offices. They are also considering accompanying the Okinawa governor on his planned trip to the United States, aiming to raise awareness among the American public of the military base issue in Okinawa.
The organizers have adopted blue as the rally’s theme color symbolizing the sea of Henoko and Oura Bay. They are calling on those who cannot participate in the rally to wear blue pieces of clothing or accessories to express their opposition to the base relocation to Henoko.
A leader of the action committee, Tatsuhiro Oshiro, was not able to attend the press conference due to his schedule. In a phone interview with the Ryukyu Shimpo, Oshiro said, “We are aware of the strength of the resolve against the Henoko relocation among residents of Okinawa Prefecture, but the depth of feeling is not fully understood in mainland Japan. Through the rally, we want to show the local residents’ strong resolve to keep fighting.”
(English translation by T&CT and Miwa Murphy)
Go to Japanese
Posted by Overseas Review at 3:17 PM No comments: