On March 8, Minister of Land, Infrastructure, Transport and Tourism Keiichi Ishii sent Okinawa Governor Takeshi Onaga an official order to revoke his nullification of the Henoko land reclamation permit. The permit is needed to implement the relocation of U.S. Marine Corps Air Station Futenma to Henoko. The order is expected to arrive in Okinawa by mail on March 8. The order holds that Governor Onaga’s nullification of the permit was unlawful, and demands that he revoke the nullification by March 15. The Okinawa prefectural government plans to reject the order, meaning that within seven days from the day after the order is received, the prefectural government will file an official objection to the order with the Committee for Settling National-Local Disputes. After the Committee reaches a verdict on the issue, the Japanese national government and the Okinawa prefectural government will likely face each other in another lawsuit.

The national government had previously brought a proxy execution lawsuit against Okinawa prefecture, hoping for a court ruling that would allow the national government to authorize the permit in place of the local governor. However, the two parties later accepted a settlement recommended by the court. While the agreed-upon settlement did encourage the national government to issue an order for Governor Onaga to revoke the nullification of the permit, it also stipulates that the government must engage in negotiation with Okinawa in an attempt to reach an “amicable solution.” In spite of this, plans for talks have yet to be made. By immediately issuing the order to Okinawa after the settlement was reached, without engaging in any negotiation, the government has shown that it places priority on carrying out the procedures that will lead to a new court verdict. It has become all the more clear that the government intends to push forward with the Henoko base construction.

According to the order issued by the government, Governor Onaga’s nullification of the permit constitutes “an act, as stipulated in Article 245.7.1 of the Local Autonomy Act, in which a prefectural government nullifies a legally prescribed transaction entrusted to it, which is recognized to be in violation of the law.” The order demands that Governor Onaga revoke the permit nullification.

Meanwhile, on March 7, the head of the Okinawa Defense Bureau (ODB) withdrew the formal objection and request for a stay of execution of the governor’s permit nullification that it had made to the national government. The ODB acted in the capacity of a private entity in making these demands, with the aim of temporarily voiding the governor’s permit nullification. The Okinawa prefectural government had filed a protest lawsuit objecting to the stay of execution, which was ordered by the Ministry of Land, Infrastructure, Transport and Tourism in response to the ODB’s request. However, because the request was withdrawn, the stay of execution will be terminated, and as soon as Okinawa receives notice from the review agency of its termination, the Okinawa prefectural government will withdraw its protest lawsuit.

At a press meeting on the same day, Chief Cabinet Secretary Yoshihide Suga stated that it was natural for the government to issue the order based on the content of the settlement terms. He also said that the government wants to engage in talks with Okinawa soon, and that the two parties will discuss how to move forward with negotiations. Defense Minister Gen Nakatani plans to visit Okinawa later this month in order to try to gain acceptance of the relocation plan.

Upon receiving the national government’s order, the Okinawa prefectural government will discuss with its team of lawyers how to proceed. It will likely file a complaint with the Committee for Settling National-Local Disputes as early as next week.

Go to Japanese
(English translation by T&CT and Sandi Aritza)

Posted by Overseas Review at 9:18 PM No comments: 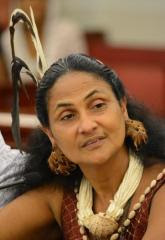 The U.S. Virgin Islands may create a registry of those with Taino and Native American ancestry and protect and promote pre-Columbian sites at Magens Bay on St. Thomas and Salt River on St. Croix if legislation proposed by Sen. Myron Jackson is enacted into law.

Maekiaphan Phillips of St. Thomas, president of the native interests group Opi’a Taino, choked up during emotional testimony in support of the measure, and an array of groups, from the Magens Bay Authority to the V.I. and Caribbean Cultural Center gave qualified support, while recommending changes to the legislation to address practical and funding concerns.

The committee held the bill, but senators emphasized the hold was for amendment and not a sign of lack of support.
Introducing the measure [Bill 31-0303 [2]], Jackson discussed archeological findings at both sites showing extensive, long-term habitation by Taino and other indigenous cultures. He recalled the finding of a sports facility, marked out by stones engraved with petroglyphs, at Salt River and how the stones were taken to Denmark, where they reside today.

Jackson spoke about what he termed the sacred nature of the land and also about the value for tourism. He showed slides of artifacts and of other sites, such as a Taino heritage exhibition in Cuba, for comparison.

"I cannot express the importance of taking this first step to secure our place in history for ourselves, our children and community, but most of all for the survival of our future generations," Phillips said, her voice cracking with emotion.
"This is something that we have struggled for," she said. "When you say that someone is extinct it means that they are no longer present. We know that history tells us that the Taino people, the Caribs, Arawaks, our African brothers and sisters, we have been put in a place of forgetfulness. This bill offers us a chance to say that our ancestors paved the way for us, so this is very emotional for me," she said, before reading a poem written by her son.

The bill mandates the Department of Planning and Natural Resources to designate Magens Bay as a prehistoric Amerindian Site of Memory and requires it to start the process to nominate the federally overseen Salt River Bay as a UNESCO World Heritage Site by 2017.

It requires the disclosure, inventory and repatriation of the remains of Amerindians; redirecting motor vehicle traffic away from the Salt River Bay site; and removing abandoned and derelict vessels from Salt River.

It also says the V.I. government is to register "any individual as having Native American heritage or ancestry" if DNA tests show at least 2.5 percent Native American genetics and mandates that UVI set up a data bank registry, along with the V.I. State Historic Preservation Office.

Robert Moron, chairman of the Magens Bay Authority governing board, testified in general support, but raised some technical concerns about the details of the bill's sections addressing Magens Bay. Moron said the authority would need funding to carry out the bill's mandates.

Sean Krigger, acting director of the V.I. State Historic Preservation Office, also supported the bill's overall purpose, but raised several concerns about the details of the bill. For instance, Magens Bay is "already added to the V.I. Registry" of historic places, he said.

Repatriating and re-interring human remains will require more detail, cooperation with the U.S. Department of the Interior and funding, Krigger said. Passages regarding rights of indigenous peoples will also "need clarification," he said.
Sen. Marvin Blyden asked Phillips to say a little about her own Taino history.

Her great-grandmother is from Vieques, which is where her Taino roots come from, she said. A pirate named James Abbott stole or kidnapped her great-grandmother at the age of 14 and took her to the British Virgin Islands. "Her children's father was an African, so from Tortola comes my Taino and my African heritage," Phillips told Blyden.

Jackson said the Senate needs to act on the bill after amending it to address issues raised by the testifiers.
"We talk and we talk and there is no action," he said. "The big elephant in the room is we lack national pride," Jackson said.

He later moved to hold the bill for amendment. Voting to hold the bill in the Committee on Culture, Historic Preservation, Youth and Recreation were Jackson, Blyden, Sens. Tregenza Roach and Sammuel Sanes. Sens. Novelle Francis, Kenneth Gittens and Positive Nelson were absent.

Posted by Overseas Review at 12:32 PM No comments: