Consul General: “China Has Good Relations with The Netherlands And Now Also With Curaçao” 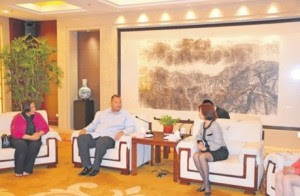 
According to Qiman, it’s her responsibility to promote the cooperation and relation between China and the Dutch Caribbean. This is why she was very excited when the Prime Minister accepted her invitation to visit China.
The preparation for this visit started before the end of last year. Thus, it took almost six months. Finally the Curaçao delegation traveled to China and this opened the doors for cooperation between the two countries.
“Now, the two countries don’t know each other very well. Many in China are asking where Curaçao is located and on the other hand, the people of Curaçao don’t know much about China,” said the Consul General.”
This is why Qiman believes that one of the major challenges is to let the people of both countries meet and understand each other. The delegation was able to see for themselves what is happening in China. They visited many authorities, companies and other entities and also interesting facilities.
“What they have seen in China could have made an impression on them. They were able to see the social stability, high level of technology, hardworking people, an efficient administration and finally the pleasant life in China,” said the Consul General.
Posted by Overseas Review at 9:25 AM No comments: