"In light of recent Supreme Court jurisprudence and Congress’s adoption of PROMESA there would seem to be good reason for the UN Decolonization Committee to conclude that the island is no longer a self-governing territory." 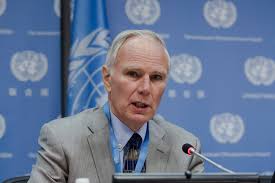 Statement on Visit to the USA, by Professor Philip Alston
United Nations Special Rapporteur on extreme poverty and human rights

"I have spent the past two weeks visiting the United States, at the invitation of the federal government, to look at whether the persistence of extreme poverty in America undermines the enjoyment of human rights by its citizens. In my travels through California, Alabama, Georgia, Puerto Rico, West Virginia, and Washington DC I have spoken with dozens of experts and civil society groups, met with senior state and federal government officials and talked with many people who are homeless or living in deep poverty. I am grateful to the Trump Administration for facilitating my visit and for its continuing cooperation with the UN Human Rights Council’s accountability mechanisms that apply to all states.

2. My visit coincides with a dramatic change of direction in US policies relating to inequality and extreme poverty. The proposed tax reform package stakes out America’s bid to become the most unequal society in the world, and will greatly increase the already high levels of wealth and income inequality between the richest 1% and the poorest 50% of Americans. The dramatic cuts in welfare, foreshadowed by the President and Speaker Ryan, and already beginning to be implemented by the administration, will essentially shred crucial dimensions of a safety net that is already full of holes. It is against this background that my report is presented.

3. The United States is one of the world’s richest, most powerful and technologically innovative countries; but neither its wealth nor its power nor its technology is being harnessed to address the situation in which 40 million people continue to live in poverty.

4. I have seen and heard a lot over the past two weeks. I met with many people barely surviving on Skid Row in Los Angeles, I witnessed a San Francisco police officer telling a group of homeless people to move on but having no answer when asked where they could move to, I heard how thousands of poor people get minor infraction notices which seem to be intentionally designed to quickly explode into unpayable debt, incarceration, and the replenishment of municipal coffers, I saw sewage filled yards in states where governments don’t consider sanitation facilities to be their responsibility, I saw people who had lost all of their teeth because adult dental care is not covered by the vast majority of programs available to the very poor, I heard about soaring death rates and family and community destruction wrought by prescription and other drug addiction, and I met with people in the South of Puerto Rico living next to a mountain of completely unprotected coal ash which rains down upon them bringing illness, disability and death.

68. I spent two days of the nine days I traveled outside of Washington, DC, in Puerto Rico. I witnessed the devastation of hurricane Irma and Maria in Salinas and Guayama in the south of the island, as well as in the poor Caño Martin Peña neighborhood in San Juan. Both in the south and in San Juan I listened to individuals in poverty and civil society organizations on how these natural disasters are just the latest in a series of bad news for Puerto Ricans, which include an economic crisis, a debt crisis, an austerity crisis and, arguably, a structural political crisis.

69. Political rights and poverty are inextricably linked in Puerto Rico. If it were a state, Puerto Rico would be the poorest state in the Union. But Puerto Rico is not a state, it is a mere ‘territory.’ Puerto Ricans have no representative with full voting rights in Congress and, unless living stateside, cannot vote for the President of the United States. In a country that likes to see itself as the oldest democracy in the world and a staunch defender of political rights on the international stage, more than 3 million people who live on the island have no power in their own capital.

70. Puerto Rico not only has a fiscal deficit, it also has a political rights deficit, and the two are not easily disentangled. I met with the Executive Director of the Financial Oversight and Management Board that was imposed by Congress on Puerto Rico as part of PROMESA. This statement is not the place to challenge the economics of the Board’s proposed polices, but there is little indication that social protection concerns feature in any significant way in the Board’s analyses. At a time when even the IMF is insisting that social protection should be explicitly factored into prescriptions for adjustment (i.e. austerity) it would seem essential that the Board take account of human rights and social protection concerns as it contemplates far-reaching decision on welfare reform, minimum wage and labor market regulation.

71. It is not for me to suggest any resolution to the hotly contested issue of Puerto Rico’s constitutional status. But what is clear is that many, probably most, Puerto Ricans believe deeply that they are presently colonized and that the US Congress is happy to leave them in the no-man’s land of no meaningful Congressional representation and no ability to really move to govern themselves.

In light of recent Supreme Court jurisprudence and Congress’s adoption of PROMESA there would seem to be good reason for the UN Decolonization Committee to conclude that the island is no longer a self-governing territory.
Posted by Overseas Review at 12:04 AM No comments: