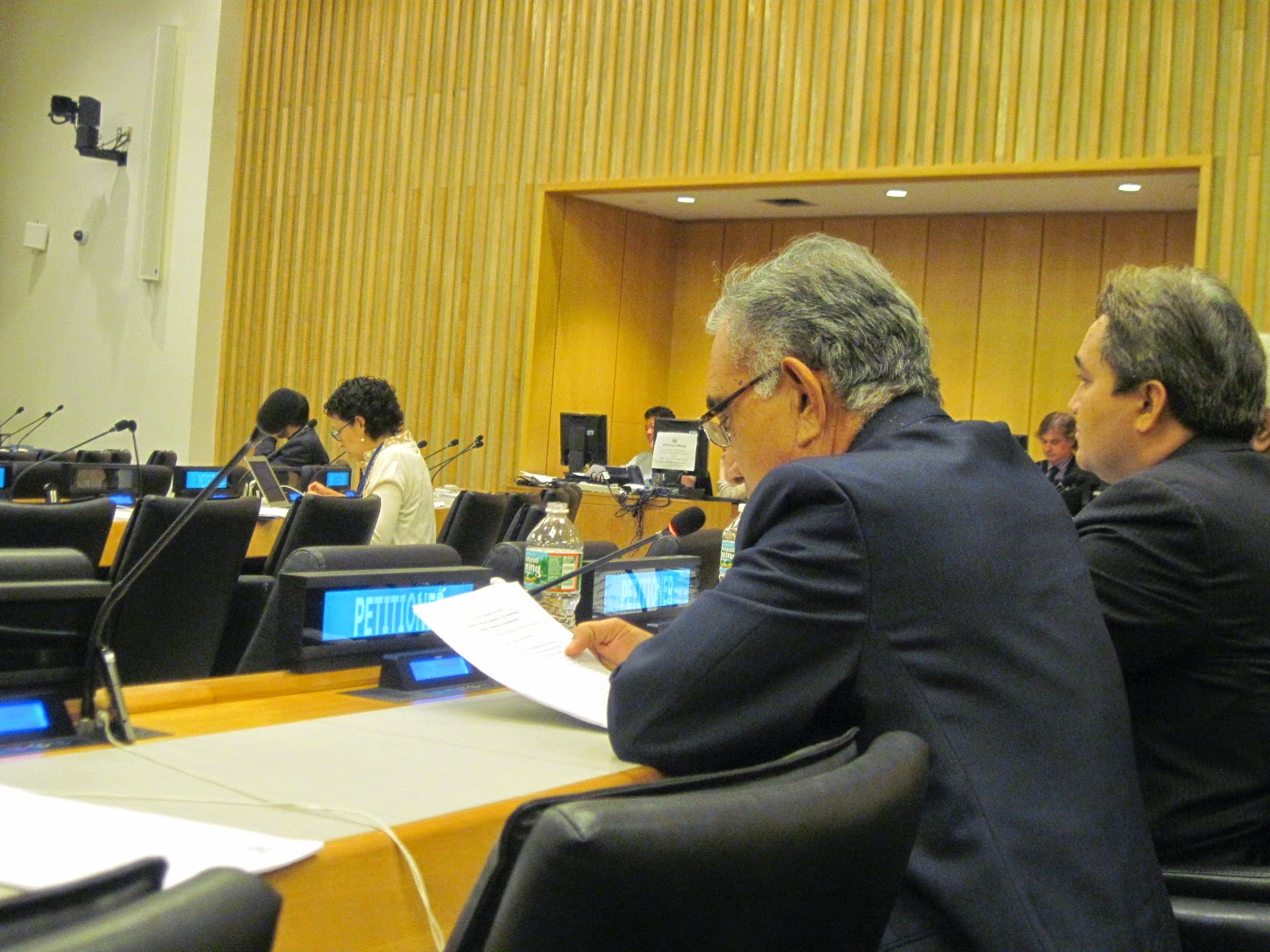 Mr. Chairman, members of the Special Committee on Decolonization,

I am honored to address the Special Committee on Decolonization in my capacity as an elected member of the House of Assembly of Ma’ohi Nui / French Polynesia from the Group “Union Pour La Démocratie” (U.P.L.D.) which I have been leading since 2004. I present to you and the members of the Special Committee the warmest regards from the people of Ma’ohi Nui/French Polynesia. We congratulate you and the other members of the Bureau on being elected to lead the work of this Committee. We also wish to extend our gratitude to your predecessor Ambassador Diego Morejón who assisted us immensely in our re-inscription on the U.N. list of non self-governing territories with the adoption of Resolution 67/265 of 17th May 2013, and the subsequent adoption of Resolution 68/93 on 11th December 2013 on the "Question of French Polynesia."

On 17th May 2014 - exactly one year after the re-inscription - thousands of our people moved throughout the towns and villages of Tahiti in a coordinated march in commemoration of this historic event which has provided us with the opportunity to engage in a process of self-determination under the watchful eye and with the technical support of the United Nations.

A series of activities were undertaken nationwide, including marches, demonstrations and vigils, to celebrate this monumental achievement which served to permit our engagement with the international community after the long period of 'dependency in the periphery' due to the unilateral de-listing of our territory in 1963 without U.N. concurrence. The men, women, children, and disabled from all walks of life began their journey from several points throughout the island of Tahiti over the course of several days under blazing sun, finally converging on the city of Faa’a in the late afternoon.

There, in a prominent ceremony, the permanent memorial to our re-inscription was unveiled symbolizing the relentless efforts of our people and a major milestone for a struggle that I started here, in New-York in 1978, as a simple citizen of my country to petition against the French nuclear testing, trying to gain international support for our struggle to overcome colonialism in our country.

This permanent memorial to our re-inscription also serves as solemn acknowledgement of the support provided by the international community, and especially the smallest of our brother Pacific countries, who stood with us as we pursued this important step towards the exercise of our right to self-determination. It is also a testament to the role of the international community in this quest highlighted by the strong backing of the Non Aligned Movement (NAM) which maintains self-determination as part of its DNA. We are deeply grateful for the sustained reference to our right to self-determination as set forth in the Seventeenth Ministerial Conference of the Non Aligned Movement held in Algiers last May. We are pleased that the sustained efforts of the NAM on our behalf are duly recognized in the draft resolution on the Question of French Polynesia (L.16) presently before you.

We are now under the purview of the United Nations decolonization process pursuant to Chapter 11 of the Charter which highlights the responsibility of the administering powers to prepare the territories for full self-government consistent with international law. We fully expect that France, as the administering power, will live up to its international legal obligations in this regard. It is regrettable, however, that the administering power has failed to transmit information on our territory this year pursuant to its obligation under Article 73 (e) of the U.N. Charter. The international community cannot simply countenance such pretense as if the consensus resolution of re-inscription had never been adopted. If countries are allowed to pick and choose which parts of the U.N. Charter they would implement, and which parts they would not, then their aggressive claims of adherence to the international ‘rule of law’ in other international scenarios ring particularly hollow.

We therefore appreciate the inclusion of the reference in the draft resolution to the failure by the administering Power to submit information on our territory. We fully expect France to meet its international legal obligations in transmitting information on French Polynesia as they did following a similar delay in transmission of information on New Caledonia one year after its re-inscription in 1986.

We are pleased that as a newly-listed territory the broad range of decolonization resolutions has become applicable to our territory. In this regard, we take note of the draft resolution (L.9) adopted by this Committee on Tuesday on the Implementation of the Decolonization Declaration with its varied provisions, in particular, the operative paragraph which recognizes the "inalienable rights of the people of the non self-governing territories to their natural resources," and their right to establish and maintain control over the future development of those resources."

This language mirrors longstanding text of U.N and Law of the Sea resolutions, and U.N. legal opinions, and the applicability of this doctrine is critical to the disposition of our marine resources comprising some five million square kilometres of ocean. Studies from Japan, and official report from the French Senate from April 2014 clearly establish that vast amounts of minerals and rare earth lie on the seabed of Maohi Nui.

In view of this clear authority the rule of law must prevail since the powers unilaterally exercised by the French State are used to limit the territory's scope and authority in relation to these resources. France is member of the International Seabed Authority. All our independent brothers and cousins from the South Pacific are also members of I.S.A. We are not. We therefore fully expect that in the course of the self-determination process our internationally recognized ownership and control of the resources is given effect.

Technology to reach these seabed resources is already available. Our administering power is already in the process of planning exploitation and has established a special committee on strategic minerals (COMES) in which we again have no say. Without real recognition of our ownership on these resources, and without control over immigration, we are bound to become the powerless spectators of yet another pillaging, as has been the case for over 30 years during the French exploitation of phosphates on the island of Makatea in our Tuamotu archipelago.

Job seekers from France will flock to our islands, and easily saturate our job market, leaving our People and our children with only the scraps. This very sad scenario has already happened throughout the history of mankind.

On the issue of the impact of the nuclear testing, we take note of the reference in draft resolution L.16 to Resolution 68/93 adopted last December requesting the Secretary-General, "in cooperation with relevant specialized agencies, to compile a report on the environmental, ecological, health and other impacts as a consequence of the 30-year period of nuclear testing in the territory.” We are disappointed that the Secretary General’s report was not made available for the consideration of the Special Committee during this substantive session. We trust that the delay is only due to the need for more time to do a credible report on an issue of great significance to our people. We are, however, keeping our "eyes wide open" - and we ask this Committee to do likewise - owing to the type of maneuvers which could be used to hinder the completion of such a report.

In the interim, we draw attention to the Independent Report on the French Nuclear Testing in French Polynesia (January 2014) that is intended for publication as a General Assembly document to advance the knowledge of member states on the issue. We are confident that this study would be useful to the Committee in assessing the implementation of the resolution on French Polynesia. We are grateful for the reference in L.16 to the linkage made with the Fourth Committee agenda item on the "Effects of atomic radiation " where the report of the U.N. Scientific Committee on the Effects of Atomic Radiation is considered. It is our hope that the Scientific Committee would consider the inclusion of French Polynesia in its programme of work.

As a reminder we would like to recall that when it seized the two atolls of Moruroa and Fangataufa where the nuclear testing took place, France had agreed to give them back when those testing would be over. Since 1996 to this day, this agreement has not been respected and the atolls of Moruroa and Fangataufa remain military property of France where the question of conducting truly independent surveys remain problematic.

In conclusion, we look forward to working with the Special Committee in this most important phase of implementation of the various elements of the decolonization mandate.

Posted by Overseas Review at 10:01 AM No comments: