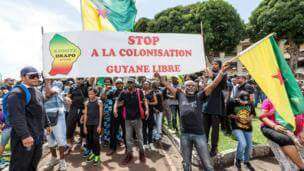 The challenges to self-determination are found globally, and no moreso than in the non-independent Caribbean. They are being played out in the streets of Cayenne (French Guiana) even within the context of the French departmental status - a status recognised by the United Nations as providing full self-government and economic parity through political integration - and a status which is supposed to provide 'equal rights and justice' in the parlance of the messenger Peter Tosh.

These are statistics more akin to developing countries under economic stress, and not in an overseas department which we are told offers equal access to the prosperity of France as one the largest economies in the world.

Thus, while there is the perception of political equality in this French model of  political integration, one cannot overlook the clear economic inequality suffered by the people of this "part of the European Union."

So the people are in the streets - and rightfully so!

Posted by Overseas Review at 11:15 PM No comments: