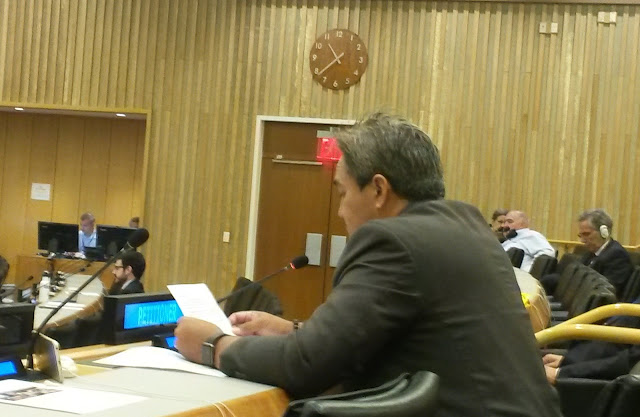 "A wide range of current and potential sources of income derived from our territory represents revenue that should be used in the development of our new economic and social model of an independent economy. Instead, such current revenue is transferred to France" - Richard Arihau Tuheiava, MP

to the Special Committee on Decolonization
United Nations

I have the honour to address you in my capacity as elected member of the House of Assembly of French Polynesia. It has been over four years since French Polynesia has been re-inscribed on its list of Non Self-Governing Territories by consensus General Assembly resolution of 17 May 2013. We reiterate our appreciation for the global support in this effort. We remain, however, disappointed that the administering Power continues to deny its obligations under Article 73(e) of the U.N. Charter to transmit information on our territory.

Various investigations made since Ma'ohi Nui was relisted on the C-24 list have revealed that the relationship between the administering Power and the territory of French Polynesia is financially abusive since decades, and does not ensure "the paramount interest of the inhabitants of the territory" as reflected in Article 73(a) of the UN Charter. Indeed, the administering Power has kept full control and sovereignty over the natural resources of French Polynesia. Permit several illustrations:

French Polynesia’s EEZ is covering 5 millions square kilometers of ocean. Although the current French organic law allows for the administrative 'competencies' of management and exploration of the natural resources to be monitored by our local elected Government, Provision 2 § 2 of the UN Convention of the Law Of Sea (UNCLOS) appears to acknowledge that full right of sovereignty over our EEZ remains with France as the State Party. The result is France is listed as the 2nd largest maritime power in the world. This rank generates sources of income in terms of international maritime trade, and a significant geopolitical influence.

Provision 2 § 2 of UNCLOS also extends the right of sovereignty of the administering Power over the undersea & seabed resources as well as the aerial zone above our EEZ. In this regard, France has created two taxes applicable to all its Overseas Collectivities, including in French Polynesia:

a) The 'Redevance Océanique" fee charged to each airline company whose planes cross our aerial zone, and land at the international airport of Tahiti-Faaa, amount to several hundred millions US dollars per year, collected by the French government.

b) An "Airport Tax' is being collected by the administering Power on every airline ticket purchased to enter in French Polynesia or to travel out of it.

Since the 70’s, the French spatial program conducted from its Spatial Base in Kourou, French Guyana has been a tremendous source of income for France. More than 300 artificial satellites cross the spatial zone above the 5 million sq. km2 of French Polynesia’s EEZ every hour. Such spatial activity is a significant business for the administering Power.

A significant quantity of world class-quality Cobalt, Platinum and Manganese, as well as Rare Earths, has been be located within the EEZ of French Polynesia. On the matter of ownership and control of these resources, the French Organic Law governing French Polynesia  (Article 14) gives to the administering Power the unilateral authority of controlling the market of 'strategic raw materials".

These are but a few examples indicating that the colonial legislation governing French Polynesia ensures the full unilateral authority of France over the natural resources of our territory. A wide range of current and potential sources of income derived from our territory represents revenue that should be used in the development of our new economic and social model of an independent economy. Instead, such current revenue is transferred to France.

The second issue I wish to raise is the question of nuclear testing. We note that references to much of the information that we have provided to this Committee and the Fourth Committee in previous years on issues related to the impacts of nuclear testing has been omitted from all relevant U.N. documents. I provide two examples to this effect:

Firstly, we have provided to this Committee the resolution of the Assembly of French Polynesia adopted on 27 November 2014 that called upon the administering Power to recognize the colonial nature of its nuclear testings in our territory.

Secondly, during the Fourth Committee hearings last year, one of the 18 petitioners Mr. Yves CONROY publicly stated that his deceased spouse has been officially recognized by the French Committee of Compensation of the Nuclear Victims as having been contaminated by one the 46 atmospheric nuclear tests conducted on Moruroa atoll - even as she had never been to the nuclear site. This revelation is scientific evidence that the French nuclear testing could have contaminated the whole population of our country!

No reference of these documented facts was made in the U.N. documentation.

The omission of reference to these and other important developments surrounding the effects of nuclear testing on our people is cause for major concern that the selectivity of information continues to be influenced by the same administering Power that refuses to comply with its U.N. obligations regarding our territory.

We are hopeful that the continuous updates on this item to be included in future reports of the UN Secretary General will be more comprehensive, and consistent with the commitment to decolonization expressed by the new Secretary General in his address to the organizational session of your Special Committee last February.