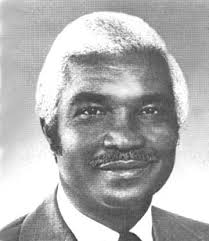 April 7 is the birthday of the second elected governor Cyril Emanuel King who passed away while in office in January of 1978. King’s distinguished career was chronicled in the excellent publication “Profiles of Outstanding Virgin Islanders,” and is required reading for those interested in Virgin Islands history. King graduated with a bachelor's degree in public administration from American University in 1951. He had been appointed in 1949 as an assistant to U.S. Senator Hubert Humphrey, and was the first person of African descent to serve in the office of a U.S. senator.
King was later appointed in 1957 by the Organic Act Committee of the Virgin Islands as its deputy in Washington, D.C. to organize the lobbying effort in the U.S. Congress to gain amendments to the Virgin Islands Organic Act. In 1961, President John F. Kennedy appointed him Virgin Islands Government Secretary which was similar to the present Secretary of State position in Puerto Rico, and forerunner of the post of Lieutenant Governor in the US Virgin Islands. He was elected to the US Virgin Islands Legislature in 1972, and was subsequently elected governor for a four-year term in 1974. He served three years of what was to become his only term.

As a young writer and advisor on international affairs to Governor King, I was honored to have had the opportunity to work for this most formidable leader whose dynamism, charisma and persistence dominated the political landscape of the day. Working for Governor King trained me in how to perform under pressure. In later years when I would address various United Nations organizations on behalf of the government, I would call on that discipline he instilled to successfully deal with the challenges of representing the territory in the international arena. Without a doubt, Governor King was a most formidable boss who commanded excellence of those who worked for him. In turn, we gained valuable experience which would serve us well later in our careers.

Of the many experiences I had in working under Governor King, one particular instance remains vivid. It was an early September morning in 1977, around 6:30 AM or so, when my phone rang in my residence in Scott Free, St. Thomas. I had only recently relocated from St. Croix to write for the governor. On the other line was Governor King who was calling to inform me that I was to meet him in St. Croix that morning. I could heard the loud roar of the Antilles Airboat engines in the background. “Meet me in St. Croix,” Governor King said, “and don’t be late.”

I didn’t know which event he was attending in St. Croix. All I knew was that I was to meet him there – on time. Quickly showering and dressing, I leaped out the front door, briefcase in hand, into my Volkswagen bug, drove quickly through the narrow Scott Free Road and down Crown Mountain Road. I made the sharp left turn onto the highway towards town, to see if I could get on the next airboat to St. Croix. Luckily there was an available seat (or someone was bumped, I can’t remember which), and I was shortly on my way to St. Croix. I now had to find out where Governor King was going – and I couldn’t be late. As luck would have it, Education Commissioner Gwendolyn Kean was on the same flight and she advised me that the governor was scheduled to speak to an assembly of new teachers that morning. I caught a ride with Commissioner Kean and St. Croix District Superintendent Gloria Canegata who were both officiating at the event.

After twenty minutes, we were pulling into the courtyard of an elementary school at mid-island where the event was taking place. Just ahead, I could see the taillights of Governor King’s official black Buick Electra pulling up to the curb. The Governor emerged momentarily from the car and headed towards the foyer of the school. I thanked Mrs. Kean and Mrs. Canegata for the ride, jumped from the car, and headed towards the school.

Governor King had been quickly surrounded by teachers and administrators who he took the time to patiently greet before he delivered his remarks. He had a certain presence which drew people around him. Even as he would silently enter a room from the rear, people would seem to sense that he was there, and instinctively turn around. As he stood in the center of this group of educators, he glanced around the room and spotted me nearby with my legal pad in hand taking notes. He gave me a quick nod in recognition that I arrived – and that I wasn’t late. Had I not been there, he may not have asked me to accompany him on the next “mission.”

It was my job at such events to draft the press release for the Governor’s outstanding Press Secretary Richie Allen for review and delivery to the media. I also had to get the names of the people who were photographed with the Governor. These complimentary pictures would be proudly displayed in many Virgin Islands homes. The Governor’s expert photographer, Leland Bertrand, was quite prolific in the number of pictures he would take of Virgin Islanders of all persuasions, and we had some interesting times linking the pictures with the names on my legal pad.

Governor King always had time for people, and he was famous for his impromptu stops along the roadside to talk to construction workers, sanitation workers, businesspersons, students and just about everyone else. Quite unexpectedly, he would walk out of Government House with his administrator Levron (Pops) Saraw and head down the hill to Main Street to hear the concerns and ideas of the people. He especially had a lot of time for the youth and often stopped to watch young people play baseball and other sports in the various athletic leagues around the territory.

Governor King was also an avid regionalist, and developed close relations with his counterpart Premier Robert Bradshaw of St. Kitts-Nevis-Anguilla during the first two years of his term. He always recognized the progressive role of nationals of the Eastern Caribbean in the economic development of the US Virgin Islands. King became the first governor of the territory to make an official visit to the region, traveling to St. Kitts on several occasions. He also welcomed Premier Bradshaw on official visits to the territory. He was the first to participate in a meeting of CARICOM when he attended the Second Conference of the Heads of Government held in Basseterre, St. Kitts in December of 1975. Serious issues on the status of CARICOM nationals residing in the US Virgin Islands were addressed at that meeting.
He was also the first governor to speak before the United Nations on the evolution of the constitutional status of the US Virgin Islands. This 1975 speech served as the precedent for the participation of successive governments in the United Nations review process of the constitutional development of the territory. By 2008, the territory still exists pursuant to a federal “Organic Act” in lieu of a local constitution – never mind, addressing the deficiencies in the prevailing political status of an unincorporated territory. As early as 1975, Governor recognised the prevailing situation as an anachronism.

Governor King’s policies promoted innovation, implementation, self-help and the necessary political autonomy for the territory to engage the wider Caribbean and the world. He was clearly ahead of his time. His perspectives are largely unknown to later generations. Efforts should be made to heighten public awareness of the philosophies and opinions of this important leader in Virgin Islands and Caribbean history.