"Both islands (Sint Eustatius and Bonaire) in their respective referendum of 2014 and 2015 rejected this illegally imposed colonial status, and both island parliaments as representation of their peoples ratified these as legal democratic decisions of the peoples."
- James Finies, President of  Foundation We Want Bonaire Back


Subject: autonomy or self-governance is not a choice- it is the most fundamental inalienable right of the peoples

We took note of your recent press media communications that you don't see the BES-islands, Bonaire, Saba and Sint Eustatius in the future as autonomous self-governing islands. Reason given that they are too small. I would like to remind you that Bonaire is a nation and according to UN General Assembly resolution 1514 (XV) of December 14, 1960; - “that inadequacy of political, economic, social or educational preparedness should never serve as pretext for delaying our fundamental inalienable right to self-governance”

Further on, you declared that your undemocratic intervention, coup d'etat, overthrowing the legitimate democratic elected government in Sint Eustatius in February 2018, had a disciplinary effect on the Bonaire government, as your recent visit to Bonaire, the government spoke much more friendly. This is evident as the leaders of government of Bonaire, both commissioners Mr Tjin-Asjoe and Mrs Den Heijer, with their subservient vision, publicly voiced, that “we cannot eat bread with autonomy”.

Firstly we recognize and respect your right of expression so you may have a personal opinion on our current illegal state-structure. However we herewith want to bring to your attention that neither you nor your government and your Bonaire friendly local government possess any legal rights nor power to deny the peoples of Bonaire and the other BES-islands, principally Sint Eustatius,  the right to self-determination and self-governance. Both islands in their respective referendum of 2014 and 2015 rejected this illegally imposed colonial status and both island parliaments as representation of their peoples ratified these as legal democratic decisions of the peoples. 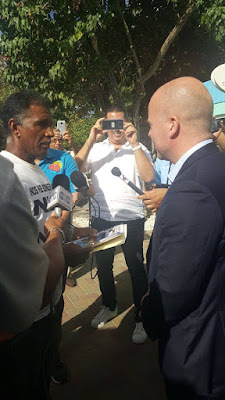 Instead of assisting our islands in enhancing their autonomy, your government, a member of the UN Security Council, has limited the development towards more autonomy and now declares that we will never regain back our autonomy. This constitutes a grave violation of the Charter of the Kingdom based on the agreements signed with the United Nations Organization in 1954. Your government continued irresponsible and undemocratic decisions and actions have caused a setback in the governing of the islands which has led to a re-colonization that violates the Charter of the United Nations especially Article 73 Chapter XI, Article 103 Chapter XVI, and resolutions 742, 747, 945, 1514 and 1541, all of which address the sacred rights of the Peoples of Bonaire and Sint Eustatius.

Our mutual colonial history, which you voiced to me personally that you don't know and don't care of, is a very dark one, with your government legalizing crimes and inhumanity, your laws to piracy, smuggling (drugs), slave-trading, making you the worlds history cruelest colonizers. We may have expected you with time to have grown out of this horrific barbaric culture, to civilize, but your recent declarations exposed your truth again, that nothing changed throughout the centuries, and you have put a suit over the plunderer of the defenseless Bonaire peoples.

Our response is by quoting Ghandi: “ that throughout history the way of truth has always won. There have been tyrants and murderers, and for a time, they seem invincible, but in the end , they always fall”.

We the peoples of Bonaire maintain our hopes high that “we shall overcome” and you shall respect, protect and comply with our inherited and acquired rights. We possess the same rights as you, to be as free and as equal and as human as yourself and all European-Dutch citizens of the Kingdom. We urge the international community to be aware of this illegal colonial status where our peoples find themselves in.

Respectfully yours, James Finies
President
Foundation We Want Bonaire Back
Posted by Overseas Review at 11:08 PM No comments:


Premier Andrew Fahie traveled to Georgetown, Grenada from May 2-4 to meet with other regional leaders about the political status of the Virgin Islands and 16 other “non-independent countries” at a United Nations Caribbean regional seminar on decolonisation.

Mr. Fahie was the first VI head of government to attend the annual seminar, which examines issues of self-determination in the remaining period of the UN’s Third International Decade for the Eradication of Colonialism (2011-2020), according to Government Information Services. In his remarks, he called for the VI to look beyond its relationship with the United Kingdom.

“Our relationship requires the international accountability that is provided for by the UN decolonisation framework,” he said. “This Caribbean regional seminar is an integral part of that process.”

READ THE FULL REPORT IN The BVI Beacon|.
Posted by Overseas Review at 10:20 PM No comments:

Under-18 Tournament Starts May 13 at the Landmark Buccaneer Hotel

Organizers estimate more than 200 tennis players will participate in both boys and girls (under-18) back-to-back tournaments, taking place May 13 to 18 and May 20 to 25 at the landmark Buccaneer hotel.

Naderi has more than 20 years of coaching experience and, as an industry expert, is the co-host of the Tennis Connected podcast and frequent contributor to tennis-related outlets such as TennisPro magazine and Tennis View Magazine. Joining Naderi as president of the IMG Academy Caribbean Cup Tennis Series is Jamaican Karl Hale. Hale is an international tennis player and coach and is the tournament director of Rogers Cup in Canada.

"The main purpose for the event is to develop a cadre of local players and provide an opportunity to play a professional junior event," said Naderi. "Our aim is to develop the infrastructure of Caribbean tennis and help build a brand and grow the game."

Joseph Boschulte, Commissioner nominee in the USVI Department of Tourism, noted the importance of such events and sports tourism to the Territory. "We are getting back into the game as we share with the world that we are open for business, and look forward to welcoming these talented athletes to our Territory," he said.

The IMG Academy Caribbean Cup Tennis Series kicked off recently in Jamaica and continues on St. Croix, the Cayman Islands and then later in the year in Barbados, Curaçao, Anguilla, Antigua and the Bahamas.

"The tournament will help to expose travelers to the beauty of the Caribbean ... and visitors traveling to St. Croix will help boost the local economy. Hopefully they will enjoy their experience, spread the word and make this a bigger and better series next year," commented Naderi.

The Buccaneer has partnered with the event as the official tournament hotel.. Naderi reported that close to 450 room nights have been booked on St. Croix, at the host hotel as well as at surrounding accommodation facilities.