CM HUGHES HAS TWO QUESTIONS FOR ANGUILLIANS: “Do You Want Complete Internal Self-Government Or Independence?” 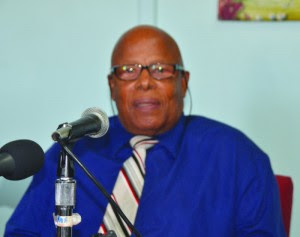 
Chief Minister Hubert Hughes said he had been so busy these days that issues such as a referendum and independence were not spoken about by him recently.

Speaking in a Radio Anguilla interview on April 10, Mr. Hughes told Keithstone Greaves: “I have been so busy with several other things, but I have the constitution ready. I want to ask the people of Anguilla two questions – one or the other: whether they want complete internal self-government at this time or whether they want complete independence.

“I intend to have a referendum to that extent – although Mr. Ronald Webster told me if I want independence I don’t need a referendum because that was agreed before. Bernice Lake also reiterated that. We do not have to go for a referendum on independence. But because there are certain people who say it is better to have complete self-government, I like to be democratic. I like the people to decide.

“I would like to formulate a paper which is based on two options: complete internal self-government or independence.”

The Chief Minister said he would like to embark on that way forward “by the end of the year at least.” He emphasised: “Before the end of 2013 I would like to see that referendum. I think a lot of work has been done already. The British Government is fully acquainted with what we have been doing and it wouldn’t take long to go to the House of Assembly and to go to London…

Even at that time Osbourne Fleming had agreed on complete internal self-government because Bernice Lake was one of his advisers. She advised on it and we went along with it. So I don’t think the process should take too long. By the end of the year we should be able to go for a referendum on one of those two choices.”