MSG to send mission to Jakarta and West Papua

The Melanesian Spearhead Group (MSG) will send a mission to Jakarta and Jayapura later this year, to discuss the issue of West Papua with the Government of Indonesia.


The recommendation to MSG leaders came at a meeting of Melanesian foreign ministers, held on Lifou in the Loyalty Islands of New Caledonia, as part of the 19th MSG Summit.

The invitation was issued by Indonesia on 3 June, during a meeting in Fiji between Prime Minister Voreqe Bainimarama and Djoko Suyanto, Indonesia’s Coordinating Minister for Legal, Political and Security Affairs and a former commander of Indonesia’s armed forces.

In the absence of PNG Prime Minister Peter O’Neill and Foreign Minister Rimbink Pato, who are leading a delegation to Indonesia, Papua New Guinea has been represented at this week’s MSG senior officials and Foreign Ministers Meeting by Peter Eafeare, PNG’s High Commissioner to Fiji.

The incoming chair of the Foreign Ministers Meeting, Caroline Machoro-Regnier, told Islands Business that the meeting had been successful, addressing issues of common concern on environment and development. But she noted that some issues like West Papua were “more political, more sensitive.”

Ms. Machoro-Regnier said: “There was an agreement by all the foreign ministers represented here that the MSG must address this issue and we’ll continue to try to find a solution, an issue that is before us and touches a fellow nation. However, this is a very sensitive topic that affects relations between Indonesia and the other member states in the Spearhead Group. So in order to find solutions, we must take some time, so to start, today’s meeting has agreed to send a mission to Jakarta and Jayapura.”

The FLNKS representative stated that the Kanak independence movement would continue to support the people of West Papua. “If this issue came up today within the MSG, it’s because the FLNKS requested it,” she said. “We asked the representatives of West Papua to come to New Caledonia to explain the situation to us. We cannot just leave the issue aside, with all the exactions, the violations of human rights that West Papua is suffering. “

Fiji took the initiative to introduce a roadmap on the issue, said Foreign Minister Kubuabola: “It’s a very sensitive issue - Papua New Guinea, Fiji and even Solomon Islands take the same position. But all the MSG countries share the same view, that we’d like to see some form of self-determination for West Papua.”

He added: “We’ve been raising our views on human rights. Even when our Prime Minister was in Jakarta in 2011 soon after the opening of our mission, he had a bilateral meeting with the President of Indonesia to raise the issue of the abuse of human rights at that level.”

The Fiji Foreign Minister acknowledged the support of the FLNKS for the movement for self-determination in West Papua. At the invitation of the FLNKS, representatives of the West Papua National Council for Liberation (WPNCL) are due in Noumea this week, to lobby for their application for MSG membership .

“The WPNCL has been invited as a special guest of the Chair of the FLNKS,” Kubuabola said. “But as far as membership is concerned, it’s being deferred at the recommendation of the Senior Officials Meeting, for this mission to go and have a look at Jakarta and also how representative this group is.”

The Vanuatu government led by Prime Minister Moana Carcasses Kalosil has supported the call for self-determination by West Papuan nationalists. The WPNCL has an information office in the Vanuatu capital Port Vila.

However the proposal to send a mission to Indonesia proceeded with support from the FLNKS and Vanuatu. Vanuatu’s Deputy Prime Minister and Foreign Minister Edward Natapei told Islands Business that Vanuatu accepted the consensus decision of the ministers.

“Our reaction follows the majority in the meeting. It seems we are outnumbered, so we have to comply with the majority. I’m happy with that decision,” he said.

Natapei said that his government would await the confirmed dates for the mission and would participate in the delegation to Indonesia.

“What we want is some timelines to ensure that this issue is going to be dealt with within this year. At least that’s a start for us,” he said. “If the meeting is to be held this year then we’re happy, because we’d like to keep the issue alive in the MSG. We can go to Indonesia and raise this issue there, then we’ll take it on from there.”

The recommendation by the MSG Foreign Ministers Meeting will now go the leaders’ summit in Noumea on Thursday. Vanuatu’s Foreign Minister is sure that the topic will remain on the MSG agenda this week.

“This issue will certainly come up again,” Natapei said. “I raised this issue here on instructions from the Prime Minister and I’m sure he will raise it at the leader’s retreat.” 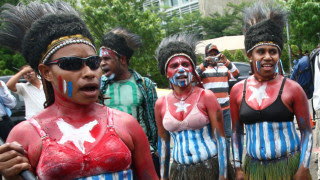 As leaders gather(ed) in Fiji... for the Melanesian Spearhead Group (MSG) Leaders Summit, the Pacific Institute of Public Policy (PiPP) has released its findings from the first ever telephone poll conducted across Melanesia.


Seven questions relating to the “Melanesian family” of nations were posed, including one asking which major “non Pacific island” nation was considered to be the best partner for individual nations in the region.

MSG leaders may be encouraged that a majority (74.9%) of respondents were aware of the regional body to represent Melanesians.

Another question posed was “do you support independence for West Papua?” A clear majority of respondents across Melanesia said yes, with very high support in PNG (89.3%) and Vanuatu (88.2%). This suggests a disconnect between popular support and the position taken by governments in the region, except Vanuatu, which has long championed the West Papuan cause at the political level.

In relation to engagement with Fiji, a majority of respondents including those in Fiji itself, opted for increased engagement or keeping the level of engagement as it is.

The views expressed by the respondents of this poll may assist MSG leaders as they deliberate on the future of this region.
Posted by Overseas Review at 10:22 PM No comments: