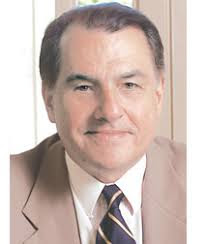 Hernandez Colon, 82, died Thursday at his home in the southern coastal city of Ponce after a battle with leukemia.

“I am here as a citizen who was forged by the actions he took. Today we bid farewell to one of the greatest leaders in the history of Puerto Rico, a Puerto Rican icon, a treasure of our island,” Rossello said.

Rossello, the son of former Gov. Pedro Rossello, said that his “consciousness of politics and leadership began to establish itself under the influence of Rafael Hernandez Colon,” considered the second most-important figure in the Popular Democratic Party (PPD) after Luis Muñoz Marin, known as the father of modern Puerto Rico.

One of the most moving eulogies came from Romero Barcelo, who praised the human qualities of Hernandez Colon.

“I regret the death of a great Puerto Rican hero, who was, on occasion, my tough and difficult adversary. We achieved a relationship of friendship and mutual respect,” Romero Barcelo said of the man with whom he often butted heads in the political arena.

Hernandez Colon was elected governor in 1972, only to be defeated four years later by Romero Barcelo, who also prevailed in 1980.

In November 1984, Hernandez Colon won back the governorship and he was re-elected four years later.

“I appreciate his selfless service to the country, but, more than anything, his iron defense of the Spanish language and our ‘Puertoricanhood,’” said Sila Maria Calderon, the island’s first and – so far – only woman governor.

Following the ceremony in the Capitol, the remains of Hernandez Colon were taken to the Cathedral of San Juan for a Mass officiated by Archbishop Roberto Gonzalez.


Hernandez Colon will be laid to rest in his native Ponce.
Posted by Overseas Review at 7:31 PM No comments: