* Relevant factual information provided from the territory, including legislative actions in the territory on important issues such as nuclear testing compensation, should not be omitted from the resolutions on the basis that it may place the administering Power in an unfavorable light.

* France, as the administering Power of French Polynesia/Ma.ohi Nui, should be formally and publically requested by the Special Committee (1) to abide by its international legal obligations under Article 73(e) of the United Nations Charter to provide information on the territory to the Secretary-General, and (2) to fully cooperate with the Decolonization Committee in working towards the advancement of the decolonization process of French Polynesia/Ma’ohi Nui under Article 73b of the Charter. 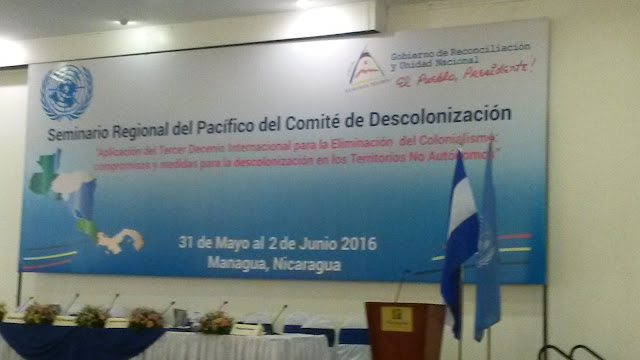 * Counter-strategies, such as the proposed bilateral accord under consideration between the territorial government and the administering Power, can actually be processes of colonial reform and legitimization rather than genuine decolonization, and can be designed to block or deviate the United Nations decolonization process permitting the administering Power to elude its obligations under Article 73 (b) of the United Nations Charter to develop full self-government in the territory. If presented to the Special Committee, such proposals should be carefully assessed on the basis of the minimum standards of full self-government.

* A standard program of political education for the non self-governing territories on the legitimate decolonization options of political equality should be developed by the relevant United Nations offices, including the Department of Political Affairs, the United Nations Development Program, and independent experts pursuant to General Assembly resolutions adopted throughout the International Decade(s) for the Eradication of Colonialism. In this connection, the newly devised political education program should be applied to French Polynesia to enhance the awareness of the people of the territory of the options available to them in advance of a legitimate act of self-determination.

* The 2014 Independent Report on "The French Nuclear Testing in French Polynesia" prepared by renowned French scientists that comprehensively analyzed the impacts of nuclear testing in French Polynesia should be published by the Special Committee as a document of the United Nations General Assembly so that its findings can be formally considered by member States, and made part of the substantive agendas on decolonization (Fourth Committee) and on disarmament (First Committee), given that the Secretary General’s 2014 Report on "environmental, ecological, health and other impacts as a consequence of the thirty year period of nuclear testing” in the Territory (French Polynesia) did not assess the humanitarian impacts of the nuclear testing.

* The Special Committee should make specific reference in its resolution to the inalienable right of the peoples of French Polynesia to the permanent sovereignty over their natural resources, including marine resources and undersea minerals contained therein pursuant to relevant resolutions of the General Assembly, decisions of the International Court of Justice, and relevant U.N. legal opinions.

Posted by Overseas Review at 7:11 PM No comments:

CARACAS, Venezuela -- Authorities from the governments of Aruba and Venezuela, and officials from Petróleos de Venezuela, SA (PDVSA) and CITGO Aruba, gathered in Caracas on Friday to witness the execution of a commercial agreement between CITGO Aruba and the Aruban government that will reopen a 209,000 B/D refinery located in San Nicolas, Aruba.

In attendance at the event were the president of Venezuela, Nicolás Maduro; the Venezuelan minister of energy and petroleum, Eulogio del Pino; the prime minister of Aruba, Mike Eman; the Aruban Minister of economy, communication, energy and environment, Mike de Meza; and the president and CEO of CITGO Petroleum Corporation, Nelson Martínez.

Following several months of negotiations, officials from the Aruban government and CITGO Aruba announced plans to reactivate operations, which have been idled since 2012, through a refining facilities 15-year lease agreement, with a 10-year extension option.