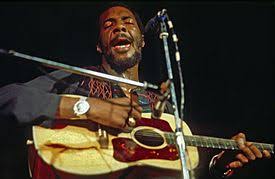 Let the river rock you like a cradle
Climb to the treetops, child, if you're able
Let your hands tie a knot across the table.
Come and touch the things you cannot feel.

And close your fingertips and fly where I can't hold you
Let the sun-rain fall and let the dewy clouds enfold you
And maybe you can sing to me the words I just told you,
If all the things you feel ain't what they seem.
And don't mind me 'cos I ain't nothin' but a dream.

The mocking bird sings each different song
Each song has wings - they won't stay long.
Do those who hear think he's doing wrong?
While the church bell tolls its one-note song
And the school bell is tinkling to the throng.
Come here where your ears cannot hear.

And close your eyes, child, and listen to what I'll tell you
Follow in the darkest night the sounds that may impel you
And the song that I am singing may disturb or serve to quell you

If all the sounds you hear ain't what they seem,
Then don't mind me 'cos I ain't nothin' but a dream

The rising smell of fresh-cut grass
Smothered cities choke and yell with fuming gas
I hold some grapes up to the sun
And their flavour breaks upon my tongue.
With eager tongues we taste our strife
And fill our lungs with seas of life.
Come taste and smell the waters of our time.

And close your lips, child, so softly I might kiss you,
Let your flower perfume out and let the winds caress you.
As I walk through the garden, I am hoping I don't miss you
If all the things you taste ain't what they seem,
Then don't mind me 'cos I ain't nothin' but a dream .

The sun and moon both arise
And we'll see them soon through days and nights
But now silver leaves are mirrors, bring delights.
And the colours of your eyes are fiery bright,
While darkness blinds the skies with all its light.
Come see where your eyes cannot see.

And close your eyes, child, and look at what I'll show you;
Let your mind go reeling out and let the breezes blow you,
And maybe when we meet then suddenly I will know you.
If all the things you see ain t what they seem,
Then don't mind me 'cos I ain't nothin' but a dream .

Posted by Overseas Review at 6:46 PM No comments:

Ewing told the Caribbean Media Corporation (CMC) that "independence remains a major issue" three years after Britain suspended the island's constitution and set up a one-man commission to probe the government of then premier Michael Misick.
"I think any right-thinking country should have independence as its destination. The time period however is the question. The need for independence must be the goal and so everything you do should be to prepare your people and country for that giant step.
"There will be a number of factors that will come into play as to whether or not that time should be fast tracked or continue along the pace that you would desire to have or would like to have and that would depend on the ongoing relationship with the United Kingdom government and the people in the territory," he said.
Ewing said that the government "of the day" would also have a role to play and "allowed to do what is right by the people, for the people to improve their standard of living and to prepare us for our plans for moving towards that step of independence.
"If it doesn't happen, all it does is to make the people even more convinced that independence is our only way out," said Ewing, who is here attending the 14th annual Caribbean Tourism Organisation organised Sustainable Tourism Conference (STC-14).
He told CMC that over the past three years, more citizens have become convinced "that independence is the way to go, more than ever before in the past because of the relationship we have had (with Britain) over the past three years.
Ewing said while he would not commit personally to a timeframe" for independence, "what I know we will do is to appoint an independence commission from the House of Assembly to look at timeframes to look at milestones that need to be achieved and to look at referendum settings...".
Ewing, whose government holds a slender one seat majority in Parliament, said there is stability in the country.
"The stability is just about there. We have elected a government that we have confidence in from a standpoint of investors," he said, aware that with a one seat majority in the House "if anything happens then we can keep on going back to by-elections and by elections and so it may not give the people the level of security they would want".
While he would not comment on the re-arrest of former premier Misick in Brazil and the extradition proceedings that had been started against him by Britain, Ewing told CMC he was still "awaiting" a response to suggestions that Britain was trying to re-colonise its territories in the Caribbean including the Cayman Islands.
"Well, I am sure everybody has a reason for doing things and I still awaiting the answer to the question," he said, adding "I were a conspiracy theorist that would be my theory" as to whether London was using finances to the territories to "keep them in check".


Posted by Overseas Review at 1:26 PM No comments: