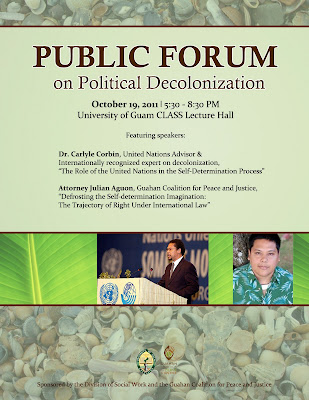 Posted by Overseas Review at 5:31 PM No comments:

Secretary of Samoan Affairs Tufele Li'amatua, the first elected lieutenant governor of the territory and a Manu'a Paramount Chief, passed away yesterday morning in Honolulu at the age of 71. The cause of death is unknown. Rep. Pulele'iite Tufele confirmed to Samoa News the death of his father and it came after Samoa News received word about the passing of this great traditional and government leader, who had left the territory several weeks ago with his wife to attend the world summit of "Christian Government Leaders" from around the world hosted by All Nations Convocation Jerusalem, held Sept. 28-Oct. 12 in Jerusalem. Pulele'iite said this is a very difficult situation faced by the family... Fili Sagapolutele [+]
Posted by Overseas Review at 5:25 PM No comments: