Tales of Decolonization #11: To Militarize? Or to Decolonize?

NO REST FOR THE AWAKE

On August 28, 2015 the Department of Defense signed the Record of Decision (ROD) for their proposed military buildup to Guam. The military buildup and its impact on Guam has long been a topic of public debate. What has often been lost in the discussion of socioeconomic and environmental impacts is what effect a military increase of this magnitude may have on the Chamorro quest for self-determination and the decolonization of Guam.

Since 2011 I have been a member of the Commission on Decolonization, and although many people might think of issues of self-determination and military increases as being separate, we should think of them as being more closely connected. The overall mission of the Commission on Decolonization is to educate the island community on issues of political status, in particular related to the holding of a political status plebiscite in which those who are legally qualified will vote on one of three future political statuses for Guam (integration, free association or independence). But how does our value as a base affect the willingness or unwillingness of our colonizer to support us in our decolonization?

The position of the United Nations on this issue has always been clear, but is scarcely reported locally. In its resolutions, military increases or strategic military importance should not be considered as reason to not decolonize territories, but this is generally used as an excuse to delay or deny action. We can find this point made in their numerous resolutions on the Question of Guam, such as this one from 1984:

The General Assembly of the United Nations “Reaffirms its strong conviction that the presence of military bases and installations in the Territory [of Guam] could constitute a major obstacle to the implementation of the Declaration and that it is the responsibility of the administering Power to ensure that the existence of such bases and installations does not hinder the population of the Territory from exercising its right to self- determination and independence in conformity with the purposes and principles of the Charter of the United Nations.”

UN Resolution 1514 (X/V) in 1960 called upon all colonial powers to assist their colonial possessions in moving towards decolonization. It does not mention specifically military bases or military training. But by 1964 the United Nations had begun to notice that in non-self-governing territories like Guam, the colonial power’s military controlled a great deal of resources and had a great deal of sway over the destiny of the colonies. Since 1965 the United Nations has approved numerous resolutions calling upon all colonial powers (including the United States) to withdraw their military bases as they represent serious obstacles to the exercising of self-determination by colonized peoples.

Bases help to enable to colonial power to see an island like Guam, not as a place in need of decolonization and redress, but as a strategically valuable piece of real estate, one necessary for the projection of military force and the maintaining of its geopolitical interests. Military facilities help colonial powers to de-emphasize the inalienable human rights of colonized peoples and instead focus on the instrumentality and necessity of controlling their lands. The expansion of bases and the establishing of new training areas as outlined in the ROD is precisely the type of increased military presence the United Nations has long cautioned against. The United Nations has also cautioned countries like the United States from using their colonies in offensive wars or actions against other nations as this could potentially make enemies on behalf of the colony when it achieves decolonization. To illustrate this point the more that Guam is used for American military saber rattling in the Asia-Pacific region, the more it becomes a target for enemies of the United States today and should it ever achieve another political status.

The Department of Defense is aware of this concern and has acknowledged the potential for their military buildup to affect certain Chamorro issues or concerns, such as decolonization in their military buildup environmental impact studies. But as with most concerns related to the United Nations and decolonization they have chosen to wash their hands of this and argue they have no responsibility or obligation in the matter.

Posted by Overseas Review at 10:53 PM No comments: 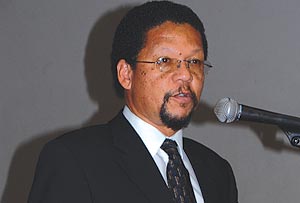 - The international community should seek to enable the peoples of the Non Self-Governing Territories (NSGTs) to exercise their inalienable right to self-determination, which is a fundamental human right, and to decide their future political status with complete knowledge and awareness of the full range of legitimate political status options available to them, including independence. In that context, particular emphasis should be placed on the dissemination of information to the NSGTs on the functioning of contemporary models of full political equality,

- The Electoral Affairs Division of the Department of Political Affairs, in consultation with the Special Committee and other relevant United Nations bodies, the territorial governments, and indigenous experts, should develop adequate and unbiased political education programmes for the NSGTs in order to heighten the awareness among the people of the territories of their inalienable right to self-determination and independence in conformity with the legitimate political status options consistent with relevant resolutions of the United Nations. In this connection, these programmes should precede a genuine act of self-determination which should be exercised in each territory, conducted by or under observation of the United Nations not later than 31 December 2020, in accordance with principles contained in the Decolonisation Declaration and all relevant resolutions and decisions of the General Assembly including the Third International Decade for the Eradication of Colonialism,

- The Special Committee should operationalise collaboration with the specialised agencies and other organisations of the United Nations (U.N.); and with the relevant human rights mechanisms such as the Human Rights Council, the Human Rights Committee, the Committee on the Elimination of Racial Discrimination, the Permanent Forum on Indigenous Issues, et al; to implement those provisions of the Plan of Implementation of the Decolonisation Mandate (A/60/853–E/2006/75) which couple the actions called for in decolonisation resolutions with the relevant implementing bodies of the U.N. system in compliance with General Assembly and Economic and Social Council (ECOSOC) mandates on assistance to the non self-governing territories.

- The Special Committee should implement the relevant provision of the Plan of Implementation of the Decolonisation Mandate, consistent with the special mechanisms employed by the Human Rights Council, through the appointment of an Independent Expert/Special Rapporteur specific to the small island territories not under sovereignty dispute, for the period remaining in the Third International Decade for the Eradication of Colonialism (IDEC) in order to carry out the unimplemented actions contained in the plan of action of the first, second and third IDECs, and the Plan of Implementation of the Decolonisation Mandate, in particular:

1) Independent analyses on the progress and extent of the achievement towards self-government in each of the small island non self-governing territories (NSGTs),

2) An analysis on the implementation of the decolonisation resolutions since the first International Decade for the Eradication of Colonialism to identify obstacles to their fulfillment,

3) Periodic briefings through an interactive format for the member States of the Special Committee and other interested delegations on developments in the NSGTs affecting their self-determination process.

- The Special Committee should commission independent self-government assessments of each of the small island territories not subject to sovereignty dispute, in the Caribbean and Pacific regions, through the use of the diagnostic tool of Self-Governance Indicators (SGIs) to identify the self-governance deficiencies in the existing colonial arrangements, and to make appropriate recommendations to bring the territories to a full measure of self-government,

- The Special Committee should develop formal collaboration with the Economic Commission for Latin America and the Caribbean (ECLAC), and the Economic and Social Commission for Asia and the Pacific (ESCAP), in order to conduct analyses on the economic and social situation of the small island NSGTs which are associate members of these two regional economic commissions.

- The Special Committee should modify its constructive ten point programme of work on a case by case basis for each small island NSGT by utilising the independent analyses of each territory (earlier cited) as the operative document for initiation of substantive discussions with the representatives of the territories, and those administering Powers which choose to engage the process leading to a legitimate act of self-determination,

- The Independent Expert/Special Rapporteur should visit each of the small island Non Self-Governing Territories as early as possible before the end of the Decade, and report thereon to the Special Committee and the Fourth Committee on the situation in the territory,

- The Secretary-General should ensure that the budget submitted for consideration by member States to fund the U.N. offices servicing the decolonisation agenda items, including the biennial programme plans and strategic frameworks, provide the necessary resources to implement the actions called for in decolonisation resolutions, the plan of action of the Third International Decade for the Eradication of Colonialism, and other relevant decisions.

Posted by Overseas Review at 9:53 AM No comments: