"The membership in the Security Council of the Netherlands and its dependencies last January came amid intensified colonial practices of the Kingdom in the Caribbean. To this end, the semi-autonomous countries of Aruba, Curacao and Sint Maarten have experienced systematic reduction of their autonomy forced by heavy-handed political pressure from Holland which controls them. Meanwhile, additional manuevers have been employed in the 'public entities' of Bonaire, Saba and Sint Eustatius where an status of 'direct ties with the Kingdom' agreed in 2010 was quickly transformed into an unwanted Dutch annexation of the so-called "Caribbean Netherlands" - the new designation used to describe the colonies which had been strategically transformed from being Dutch dependencies in the Caribbean to being projected as inferior parts of Europe.

Ironically, two of these three dependencies had formally rejected the emerging colonialism in formal referenda in Sint Eustatius (2014) and in Bonaire (2015). The results of these referenda were either mis-represented by the Dutch in the case of Sint Eustatius, or totally ignored in the case of Bonaire. Sint Eustatius even suffered through the unceremonious "colonial coup" through the abolition of its elected government in favour of a Dutch-appointed prefect who would administer the colony with absolute power at the direction of the colonial master. The lack of response to such extraordinary events by countries of  Latin America and the Caribbean has not go unnoticed, as the spectre of extra-regional colonial powers operating with impunity in the hemisphere in the 21st Century remains a sad commentary.

It is unsurprising that the members of the United Nations Security Council would welcome the Netherlands membership with open arms given that the other present-day colonial powers of France, the United Kingdom, and the United States - the permanent members of the Council - all freely operate in the hemisphere. Only the issue of the Malvinas (Falkland Islands) appears to be on the radar screen of some hemispheric states whilst their silence surrounding colonialism in the Caribbean territories is deafening.

The ancestors must surely be rolling in their graves...

Kingdom Of The Netherlands In U.N. Security Council

NEW YORK - The Kingdom of the Netherlands, including Aruba, Curaçao and St Maarten, took up its seat on the United Nations (UN) Security Council for a one-year tenure as of January 1.

The Kingdom will chair the Security Council during the month March. It has been present as an observer at the Council’s meetings from October 2017. Karel van Oosterom, the Kingdom’s Permanent Representative to the UN, tweeted Monday: “Mille grazie to our Italian colleagues … for a great first year of the Italian-Dutch #SplitTerm in the UN Security Council.”

During the Security Council elections in 2016, the Kingdom made agreements with Italy on dividing the 2017-2018 term, so that each state would occupy the seat for one year. 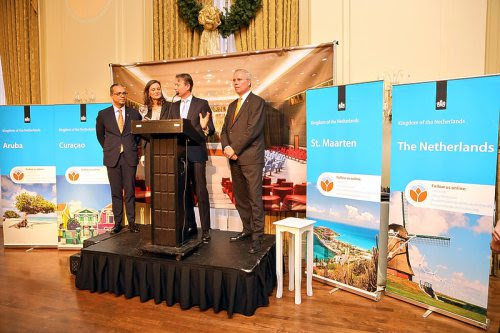 Photo: Van Oosterom with other colleagues at the changeover at UN with backdrops featuring St. Maarten and other 'countries' in the kingdom.
Posted by Overseas Review at 10:05 PM No comments: