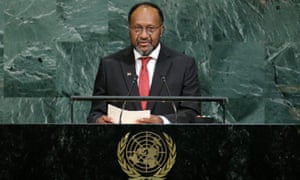 
Melanesian leaders have accused the United Nations of having “turned a deaf ear” to human rights atrocities in the Indonesian province of Papua and urged the world to support the region’s campaign for independence.

At the UN General Assembly in New York, the prime ministers of the Solomon Islands and Vanuatu called on the UN’s Human Rights Council to formally investigate long-standing allegations of human rights abuses in the provinces.

Vanuatu’s prime minister, Charlot Salwai, said the people of West Papua must be allowed the right to self-determination, to free themselves of the “yoke of colonialism”.

“We also call on our counterparts throughout the world to support the legal right of West Papua to self-determination and to jointly with Indonesia put an end to all kinds of violence and find common ground with the nationals to facilitate putting together a process which will enable them to freely express their choice.”

The Solomons leader, Manasseh Sogavare, said the UN’s sustainable development goal motto of “no one left behind” would be “synonymous to empty promises unless we in the United Nations take active steps to address the plight of the people of West Papua”.

“Failing this, we as a family of nations will become complicit in perpetuating the sufferings and becoming blind to the injustices, missing yet another golden opportunity to remain true to the saying of ‘leaving no one behind’.”

Indonesian-controlled Papua and West Papua form the western half of the island of New Guinea. Political control of the region has been contested for more than half a century and Indonesia has consistently been accused of gross human rights violations and violent suppression of the region’s independence movement.

The people indigenous to the province are Melanesian, ethnically distinct from the rest of Indonesia and more closely linked to the people of Papua New Guinea, the Solomon Islands, Vanuatu, Fiji and New Caledonia.

Formerly the Netherlands New Guinea, Papua was retained by the Dutch after Indonesian independence in 1945 but the province was annexed by Jakarta in 1963 and Indonesia control was formalised by a 1969 referendum widely condemned as having been fixed by the Suharto government.

Known as Irian Jaya until 2000, the province has also been split into two provinces, Papua and West Papua, since 2003.

Many Papuans consider the Indonesian takeover to have been an illegal annexation and the OPM (Free Papua Movement) has led a low-level insurgency for decades.


Indonesia accused of arresting more than 1,000 in West Papua


That insurgency has long been the excuse for significant military involvement in Papua.

With the heightened police and military presence, there have been reports of security force abuses including extrajudicial killings, torture, arbitrary detention, excessive use of force and mistreatment of peaceful protesters.

At least 37 Papuans remain behind bars for peaceful acts of free expression or expressing solidarity with the independence movement.

There is little independent scrutiny of the situation in West Papua, human rights organisations and journalists are restricted from visiting.

On taking office in 2014, the Indonesian president, Joko Widodo, pledged to boost economic development of Papua and he –ostensibly – eased restrictions on external scrutiny of the region, though travel strictures have not substantially changed. He visited the province in May.

Last month Jokowi met with Papuan civil society, church and customary leaders to discuss establishing a formal mechanism for debating Papua’s long-standing issues. However, Jakarta opposes independence and regards retention of Papua as a fundamental to its “territorial integrity”.