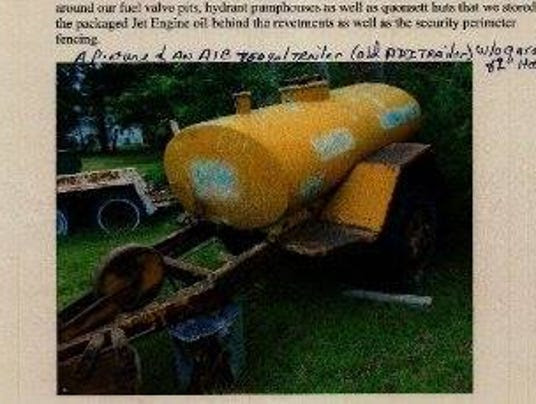 (Photo: Courtesy of Leroy Foster)
The military last week told Guam Del. Madeleine Bordallo that Agent Orange, a hazardous defoliant, was not used on Guam, but Gov. Eddie Calvo, citing statements from veterans, has instructed the Guam Environmental Protection Agency to test for traces of the chemical, according to the governor’s office.
Guam EPA announced Monday that investigations are already actively underway. A release stated that agency officials "have been involved in discussions with Department of Defense (DOD) and the United States Environmental Protection Agency (US EPA), engaging in an investigation into the claims made by retired Air Force Master Sgt. Leroy Foster and other veterans who were stationed in Guam in the 1960s and 1970s."
According to the release, "GEPA officials informed the governor that requests for signed affidavits from individuals who have publicly stated that Agent Orange was used on Guam have been made, with the intent of documenting and pinpointing any and all areas where the herbicide may have been allegedly used on the island."
"These discussions about our investigation are yielding productive results for our agency in terms of investigation, sampling methods, analysis and abatement measures," GEPA administrator Walter Leon Guerrero stated in the release. "More specifically, we initialized talks with US EPA's Region IX Emergency Response Team who have worked with a Superfund Technical Assessment and Response Team."
START teams are "experienced in removal and abatement of dioxins with respect to sites historically known to be affected by the sprayed application of herbicides," the release stated.
Drinking water and soil will be tested in areas where Agent Orange reportedly was sprayed, according to the governor’s office, which cited recent public statements by veterans who claimed they sprayed Agent Orange around Guam during the Vietnam War.
“This is deeply disturbing, considering that the contaminant in Agent Orange, 2,3,7,8-tetracholordibenzodioxin (TCDD), is a carcinogen. There are veterans suffering life-debilitating illnesses attributed to their exposure to Agent Orange. Their public admissions have raised the attention of several government leaders, including Dennis A. Ross, Senior Deputy Majority Whip, and our own Congresswoman Madeleine Bordallo,” the governor’s office stated.
Leon Guerrero expressed concern on the important issue of possible TCDDs in Guam's drinking water and soil, and outlined the plan of action should TCDDs be detected.
"Our agency will work in tandem with other agencies to meet our mission in safeguarding the environmental and human health on Guam," Leon Guerrero said. "If there is any discovery of dioxins on Guam that can be linked with Agent Orange, the Guam EPA will coordinate with the Guam Waterworks Authority, the Joint Region Marianas and Water and Environmental Research Institute of the Western Pacific (WERI) to engage in remedial action, upon discovery."
Florida resident and veteran Foster said he personally sprayed thousands of gallons of Agent Orange at Andersen Air Force Base, while stationed there with the 43rd Supply Squadron Fuels Division during the Vietnam War.
In 2009, veteran Edward Jackson, in written testimony to Congress, said he was a bus and truck driver who occasionally was assigned to drive a truck with 55-gallon drums of alleged Agent Orange and other herbicides.
He said the herbicides were sprayed at Naval Magazine, Naval Communications Station, Naval Air Station, Navy Harbor and around his barracks area at the Marbo complex.
He said leaky barrels of Agent Orange were either loaded on ships for disposal at sea, or taken to Andersen’s Northwest Field if they were too leaky to be safely moved.
Bordallo, who asked to be briefed by the military about the use of Agent Orange after hearing veteran accounts, last week said senior defense officials told her Agent Orange was not used on, stored or shipped through Guam during the Vietnam War.
“I look forward to reviewing their records that support this claim and continuing to engage with the DoD and local stakeholders so that we have all the facts on this issue,” she stated last week.
Calvo said he also is watching the federal government’s response.
“In consideration of the statements made by veterans regarding the spraying of this chemical on Guam, I have justifiable concern about the residual effects this chemical may have on our environment, particularly our aquifer and drinking water sources,” Calvo stated in a letter to Guam EPA Administrator Leon Guerrero.
Posted by Overseas Review at 1:09 AM No comments: