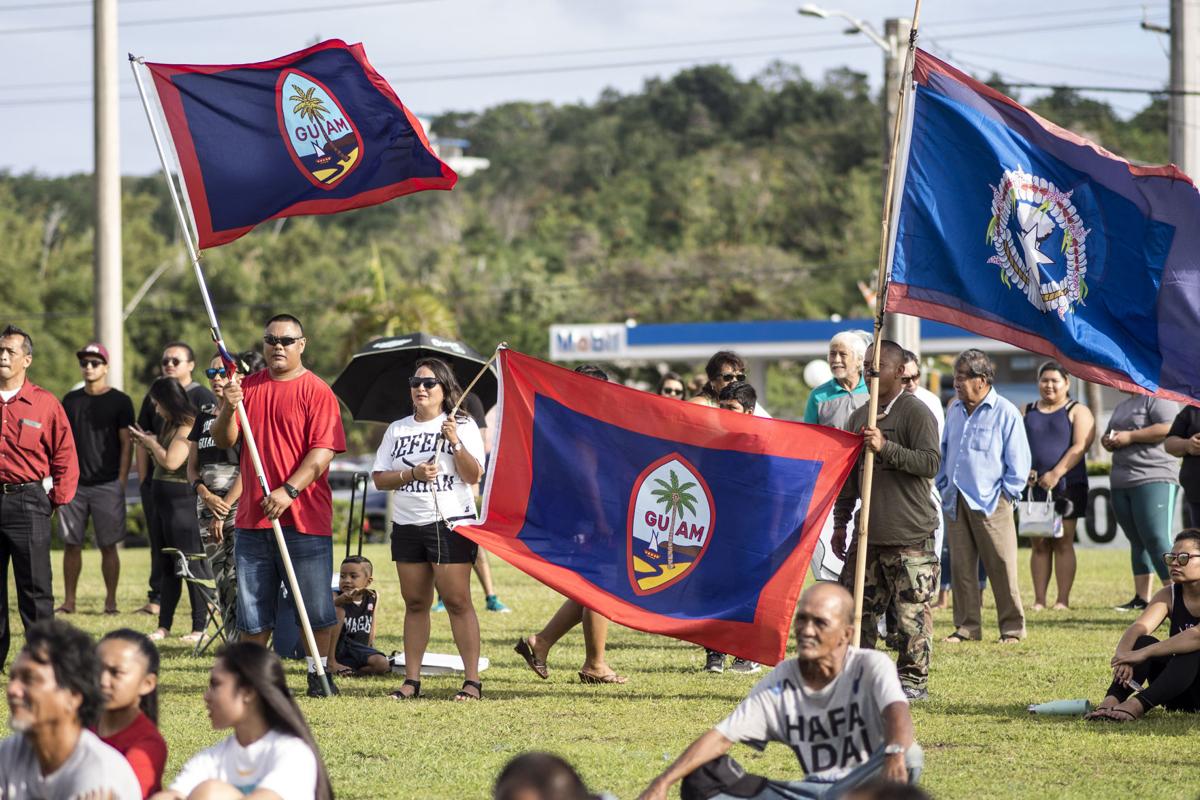 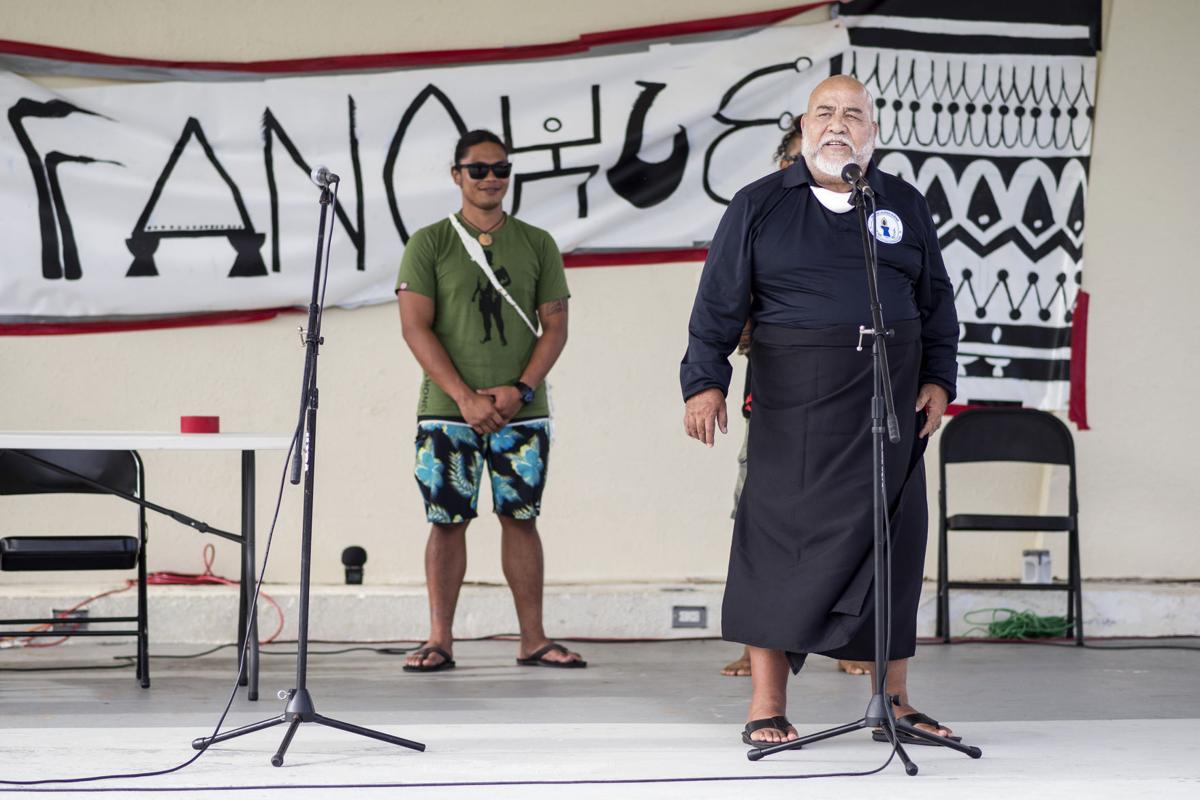 FANOHGE: Bob Pelke makes remarks during the Respect the CHamoru People rally at Adelup in Hagåtña on Friday, April 7. Norman M. Taruc/The Guam Daily Post
"A lot of the Chamorros here and the community feel (the ruling) was an attack on them, calling us racists for not allowing somebody to register to vote in our plebiscite or register land." – Amber Benavente-Sanchez, rally organizer

Hundreds of people descended on the pristine front lawn of the governor's office at Adelup late yesterday afternoon to join the "Respect the CHamoru People" rally that was being held in response to a March 8 District Court of Guam ruling holding Guam's plebiscite unconstitutional.

The rally began around 4 p.m., just hours after the Office of the Attorney General filed a notice at the District Court stating that it would appeal the earlier decision with the 9th Circuit Court of Appeals. Counsels for the government of Guam in the case include Attorney General Elizabeth Barrett-Anderson, Deputy Attorney General Kenneth Orcutt and Special Assistant Attorney General Julian Aguon.

Aguon had argued Guam's case before Chief Judge Frances Tydingco-Gatewood of the District Court of Guam in September 2016, and had been researching arguments for a potential appeal in the aftermath of the court ruling.

Barrett-Anderson has told The Guam Daily Post that her office would only pursue an appeal if it believed it had a strong argument.

Guam's political plebiscite had been limited to indigenous residents. Tydignco-Gatewood found that the status vote was race-based and therefore, unconstitutional. Longtime resident and U.S. Air Force Veteran Arnold "Dave" Davis challenged the plebiscite on behalf of himself and others unable to register for the vote. The ruling struck a chord with many activist and citizens, who viewed the decision as an example of the federal government undermining indigenous rights.

A matter of messaging

Yesterday's more than two-hour-long rally included activities, songs and speeches from noted individuals – Chamorros and non-Chamorros – such as Carmen Kasperbauer, a World War II survivor and wife of former Sen. Larry Kasperbauer. Robert Underwood, president of the University of Guam, said he attended the event to show support for those fighting for Chamorro rights – a long-term project that has struggled over decades, he added.

But interspersed within the mass of chanters, educators and activists were individuals much more blunt in expressing their animosity toward the man now at the center of their struggle. They carried signs and wore T-shirts making derogatory statements about Davis – some calling him a racist.

Tano Lizama, wearing a "Deport Dave Davis" T-shirt, said he wanted to show that Davis had "awoken the Chamorro people" with his actions. The shirt and its message, he added, was a symbol of how upset he had become over recent events, for which Davis was the catalyst.

"I don't think it's inflammatory. I don't think it takes away from the message," Lizama said. "Everyone's got their own opinion ... Dave Davis is just a small piece of this and this shirt is just how I feel."

Amber Benavente-Sanchez, a rally organizer, said she did not want the message of the event to be directed by animosity.

"Here's the thing on the racist issue ... a lot of the Chamorros here and the community feel (the ruling) was an attack on them, calling us racists for not allowing somebody to register to vote in our plebiscite or register land," Benavente-Sanchez said.

"What we want to make clear here is we are the indigenous people of the island – here for 4,000 years and colonized for over 400 years. We want the community of Guahan to recognize that we have rights, too. We are not racists, we have opened up our doors and its our turn now to be recognized," she said.

Benavente-Sanchez said the signs and statements made at the rally were up to the individual but in the weeks planning for the event, she had spoken to people who felt that some of Davis' past public statements were also derogatory or racist in nature – leading them to counter similarly.

She added that she wanted people to walk away from the rally understanding that Chamorros had rights as a people and to walk away a bit more educated on current matters.

"We've invited the (plebiscite) task forces. We've invited Chamorro Land Trust here to set up information booths. We want people to walk away with a sense of pride, to recognize that we have rights and to get a little bit educated with the issues at hand," Benavente-Sanchez said.

Gov. Eddie Calvo had made the plebiscite a major initiative for his administration. He told media yesterday that he still hoped to hold a vote at the end of his term in 2018 and would continue with the process while the appeal made its way through court. After the District Court decision ruled the plebiscite unconstitutional, Calvo proposed using a dual-ballot system that would indicate whether a voter was a non-native or indigenous resident but opened the vote to all residents.

The rally was also in response to a Department of Justice notice in January finding the Chamorro Land Trust Act discriminatory in nature. The attorney general has publicly opposed the DOJ on this matter and stated in a March letter that she would not enter into a consent decree, as requested by the federal justice department. She asked that a copy of whatever lawsuit the DOJ files be forwarded to her office instead.

Davis had filed a complaint initially bring the matter to the attention of the DOJ.

Posted by Overseas Review at 2:32 PM No comments: