The meeting was the first since the election of a new administration in Martinique following the French national elections of Dec. 2015. 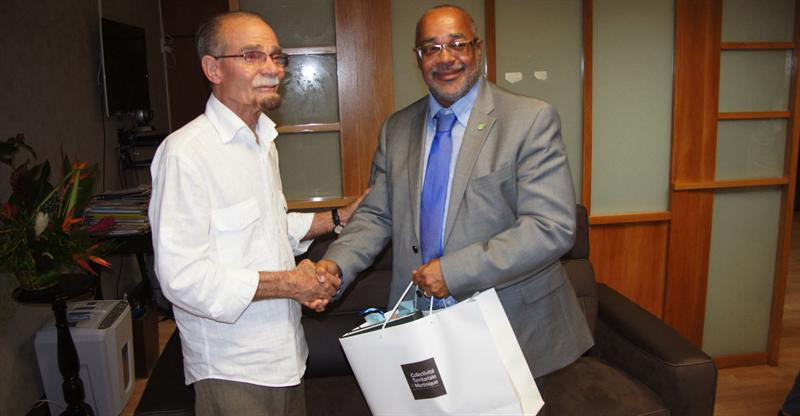 Director General of the Organization of Eastern Caribbean States (OECS), Dr. Didacus Jules (r), met with the President of the Executive Council of Martinique, Alfred Marie-Jeanne at the offices of the Collectivité de Martinique in Fort-de-France.


The meeting was the first since the election of a new administration in Martinique following the French national elections of Dec. 2015, and follows the long-established practice of briefing engagements between the Director General and newly elected heads of political administrations of member states.

The meeting covered a wide range of issues including the nature and structure of the new governance arrangements in Martinique, as well as the inherent implications for a smooth transition between both administrations and systems; the priorities of the new administration both domestically and in respect of regional cooperation; the governance structure and arrangements of the OECS; and the modalities of participation by Martinique as a member of the OECS in the work of the organization.

Attention was also given to the necessity for continued active participation of Martinique in the organization, and for continuation of the active engagement between the administration and the OECS Commission. In this regard, the President confirmed the decision of his administration to maintain its resident representation at the OECS Commission via the physical presence of the Commissioner for Martinique, and agreed on the urgent necessity for the appointment of elected representatives and other officials to the various OECS organs and working groups.

The parties to the meeting considered it a tremendous success, and agreed on the need for continued engagement and action in the interest of achieving concrete results.

The President and the Director General were supported by their respective delegations which included Chef de Cabinet Mme. Maguy Marie-Jeanne, OECS Commissioner for Martinique Mme. Murielle Lesales, and Head of International Relations at the OECS Commission, Anthony Severin.

Posted by Overseas Review at 3:07 PM No comments:

Posted by Overseas Review at 3:04 PM No comments: